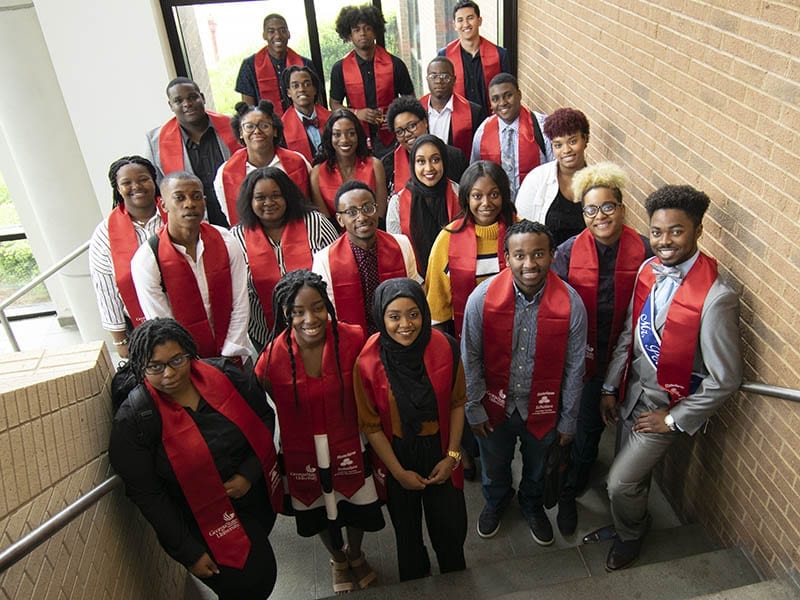 DECATUR, Ga.—Two years ago, a group of Southwest DeKalb High School seniors were unsure of where — or if — they could afford to go to college. In a surprise announcement, they learned that every one of them would receive a State Farm Mentoring Scholarship that would cover their tuition at Georgia State University’s Perimeter College.

Now those students — and other State Farm Scholars from DeKalb County schools — are finishing their journey, joining more than 1,900 graduation candidates who will earn degrees from Perimeter College this spring and summer.

During a special ceremony May 6 for the scholars and their family and friends on the Decatur Campus, the scholars received bright red State Farm stoles to drape over their graduation gowns. They also were recognized for their accomplishments during the past two years by Eric Cuevas, Georgia State University’s director of student success; Des Potier, director of Georgia State’s Learning, Income and Family Transformation program, and State Farm executives Mark Robinson, DeWayne Griffin and Tammy Higa-Seaver.

“It feels like today is a family reunion,” said Potier. “I’m so happy to see you guys get to this point.”

The recognition ceremony was a poignant reminder for Keyanna Johnson of how fast the time has passed. Johnson began her educational journey at Perimeter College with a gleeful phone call “You’re speaking to a future Georgia State Panther — I got the scholarship, Mommy!” during the Southwest DeKalb High School surprise scholarship ceremony in April 2017.

While at Perimeter College, Johnson received an internship with The Drake House for homeless women and children and became involved with the Nonprofit Leadership Alliance on Georgia State’s Atlanta Campus. Working at The Drake House and with others at the NLA inspired her to change her career path from history to political science and public policy, she said.

“I realized that I really wanted to focus on a career that would benefit my community,” she said.

“Before the State Farm scholarship, I knew I wanted to go to college, but wasn’t sure about spending the money to come,” she said. “Because of my great experience, now I want to start a nonprofit mentoring program for girls.”

“We will work in self-love, worth and motivation, leadership skills and college and career preparation,” she said.

Johnson will continue her studies in political science and her involvement with the NLA on the Atlanta Campus this fall. This summer, she takes on another internship with 100 Black Men of Atlanta, where she’ll help plan their fall conference programming.

Johnson and 23 other State Farm Scholars from DeKalb County will receive their associate degrees in spring and summer. Some are moving on to Georgia State’s Atlanta Campus; others have been accepted to four-year institutions across the state.

The State Farm Scholarship program, funded through a $14.5 million gift from the State Farm Insurance Corporation, is part of the Georgia State LIFT program, one of Georgia State University’s student success initiatives. It was created to help DeKalb County students with scholarships, advisement, employment opportunities and leadership training to stay on track for graduation. State Farm Scholars also are encouraged to give back to their communities through volunteering and peer mentoring, said Potier.

“This group of scholars are pioneers,” Potier said. “They took a chance on themselves and the State Farm Mentoring Scholarship and are now in position to not only obtain a post-secondary credential but to do so debt-free. They are future film makers, teachers, lawyers, doctors, psychologists, social workers, researchers and community activists — and now they are Georgia State University Perimeter College graduates.”