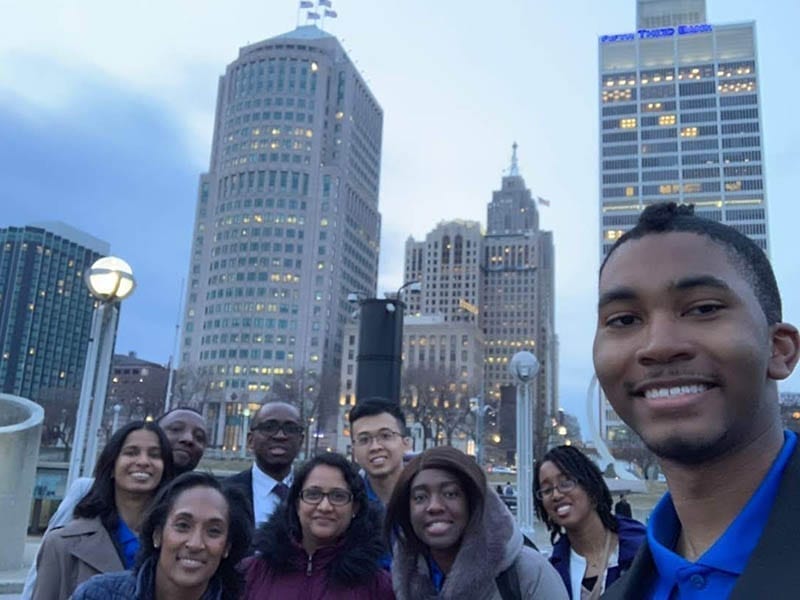 CLARKSTON, Ga.—They called themselves the “GSU Avengers.” In less than 24 hours, these students from Georgia State University’s Perimeter College who had traveled to Detroit seemingly reached near superhero status, knocking out top engineering school students from across the country to place third in the Google Hackathon coding challenge.

Their creation: a web application to improve national disaster communication between the suppliers of needed goods and the volunteers delivering supplies.

The Hackathon contest was one of many highlights of the students’ trip to the 45th annual National Society of Black Engineers Convention in Detroit, March 27-31. It was the first time Perimeter College students were able to attend the event, which attracted more than 12,000 students and faculty from highly rated engineering programs across the nation, along with representatives from respected engineering companies, said Dr. Cynthia Lester, associate dean of Mathematics, Computer Science and Engineering at Perimeter. Lester was one of the faculty advisors on the trip.

“Students had the opportunity to network with hundreds of engineering programs and employers and went to events designed to enhance their knowledge and encourage creativity in engineering and technology,” she said.

“Our students were able to interview with companies there and beat out top engineering students from around the country to land internships and job offers,” Lester said. “This was a big deal, and a great opportunity for our students.”

Isaac King was one of the Perimeter students who received an interview for a possible summer internship as a software engineer with Chevron.

“Going to the NSBE convention gave me the opportunity to learn and grow on a personal, academic, and professional level,” he said. “I learned valuable tips from mentors at Lockheed Martin and Chevron. I also was challenged by my peers to develop my skills as a programmer by participating in the Google NSBE45 Hackathon. After the competition, I made multiple contacts during the convention where I spoke to Googlers and engineers about increasing diversity in STEM on our Perimeter campuses and the possibility of collaboration between multiple tech companies and our STEM department.”

“The students started at 6:30 p.m. Friday, stayed all night at the (Detroit) Google office, working on a design project, finishing up at 12 p.m. Saturday,” said Dr. Sahithya Reddivari, assistant professor of engineering and one of three Perimeter College faculty who accompanied the students to the Michigan conference. Srilatha Bingiere, assistant professor computer science, also attended the convention.

“The judges were so impressed with their design that they have asked to follow up with students,” said Reddivari.

“The Hackathon challenge was a wonderful experience at the NSBE conference,” said team member Hoang Hyunh. “My team came up with a web application that helps suppliers connect with volunteer truck drivers during national disasters. The judges loved our app so much. They asked lots of questions and suggested many future improvements.”

“There were some difficulties we had to face when we built the app,” he said. “None of us had knowledge about working with databases (and) we learned a lot during the process. I was thankful for the opportunity that I had, and I hope the school will have more events like this for students to grow.”

“In addition to placing 3rd in my first ever hackathon event, at the NSBE conference career fair, I spoke with the Delta Tech Ops team and was invited to interview for a full-time job,” said student Dinah Johnson. “I also received valuable guidance from a representative from the NASA Jet Propulsion Laboratory about what steps I can take moving forward to align my academic journey with my career goals. I feel more confident and more motivated than ever, and I’m eternally grateful for the opportunity.”