ATLANTA–Veronica Biggins, trailblazing corporate executive, presidential appointee, community leader and Georgia State University alumna (M.Ed. ’70), encouraged WomenLead students and alumni to “know what you believe in and stand by it” in an address at the inaugural induction ceremony for the undergraduate leadership program. The event was held Feb. 26 at the Center for Civil and Human Rights.

WomenLead alumna Dana Powell (B.B.A. ’16) reflected on the program’s impact on her career.

“This class inspired me to set higher goals for myself,” said Powell, an insight and strategy analyst at Adult Swim. “WomenLead taught me to know what I bring to the table and walk in with confidence.”

We, and generations of WomenLead students to come, are the actors and the advocates for women’s leadership. We embrace the WomenLead movement with this call to action:

As WomenLead lifted us up and helped build our confidence and ambition, we will pay it forward and do the same for others.

As WomenLead helped us to find our voice, we will help to ensure that more young women will be able to discover their voices.

As we enter the world as empowered and determined graduates of WomenLead, we will engage in our communities and make a difference in the world. 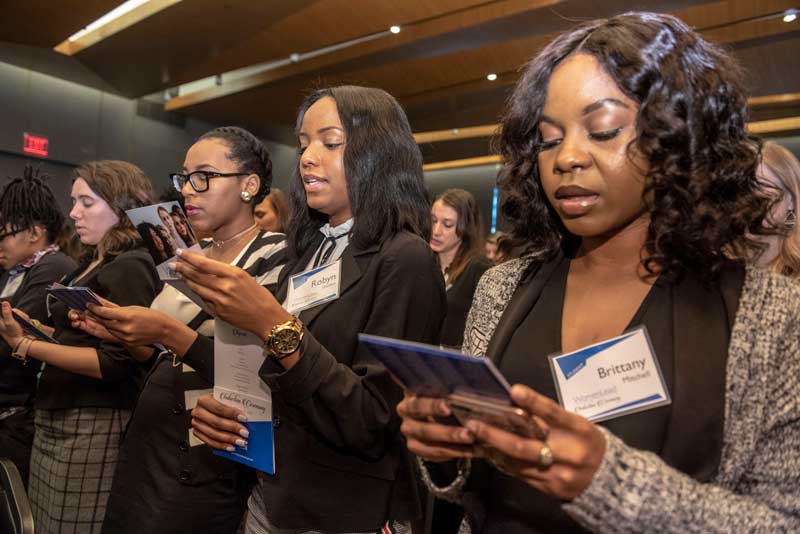 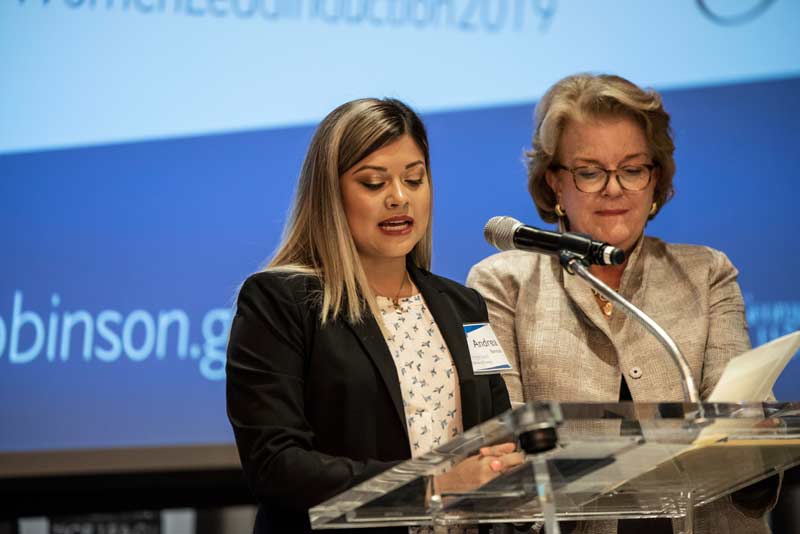 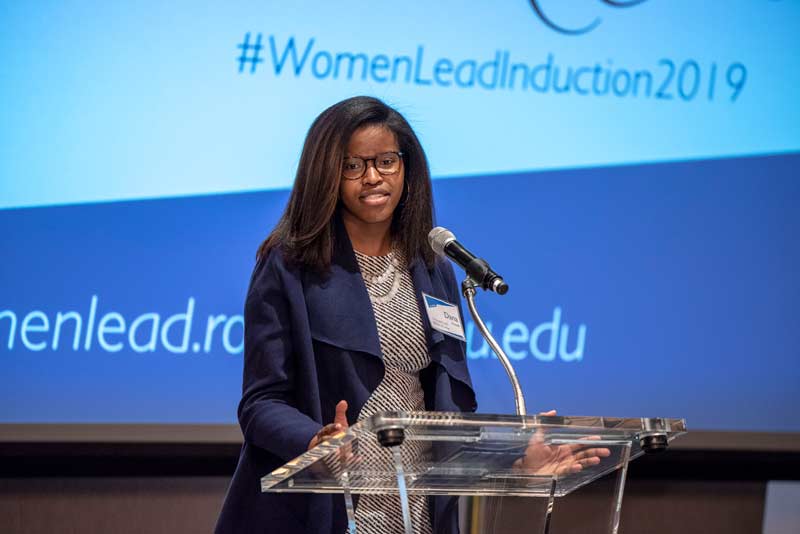 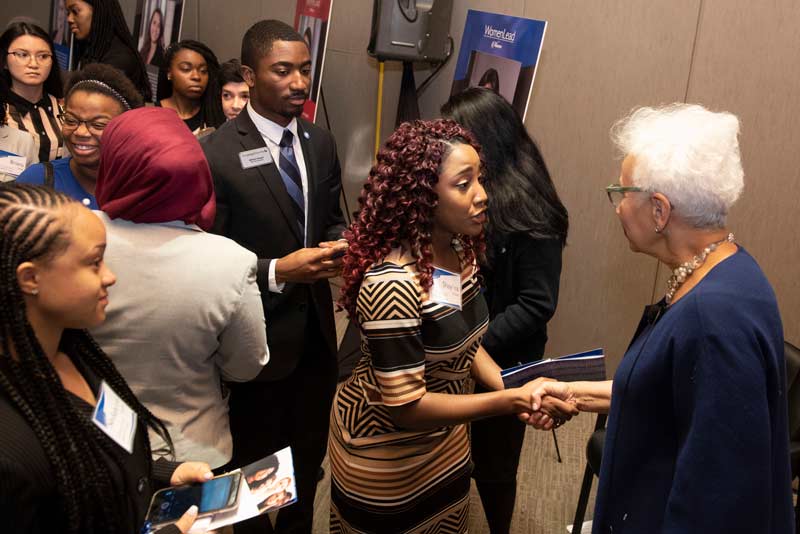 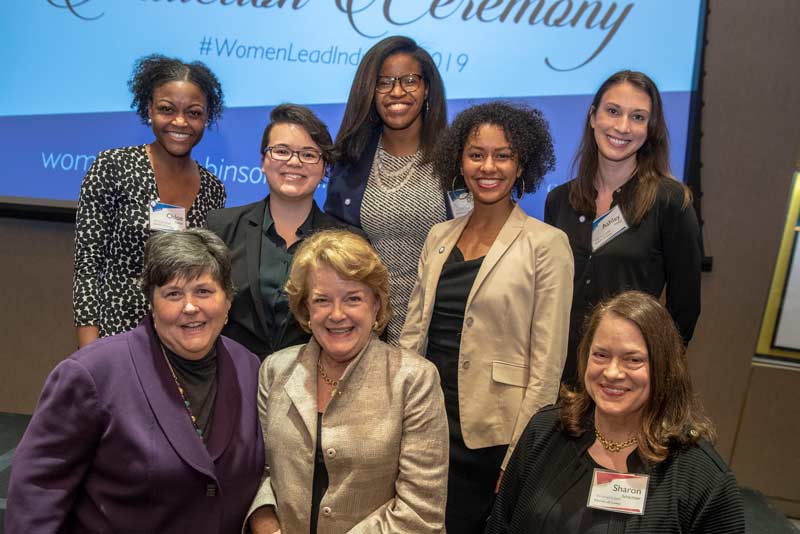 Biggins discussed her path to success and offered advice to the audience of 250. Among her recommendations:

Get a passport. “In the sixth grade I got my first passport, and I’ve never had a day since then I did not have a valid passport. … Get out of the United States. Go to Canada. Go to Mexico. Go to Europe. Go to Eastern Europe. Go to China, and realize all the different lives that are being led. It’s important that we understand this broader world we live in, because what happens in the broader world affects us every day. … As part of being successful in the business world, you have to understand there’s a bigger world.”

Read, read and read. “Read every day. … When you get involved in a debate with somebody and you want to put forth your opinion, you’ve got to know all the other opinions in order to effectively put forth your debate. … Even if you don’t agree with them, it doesn’t matter. You’ve got to understand all points of view. … It’s really important you read and form your own opinions. You have to know what you’re talking about. ‘Fake it till you make it does not work.’”

WomenLead began as a pilot program with 26 students in spring 2015 to equip female students to excel in school, enter the workforce with developed skills and find their place in leadership positions. Today, more than 600 students across the university have taken the semester-long course, offered as WomenLead in Business, WomenLead in Policy and Politics, and WomenLead in Science. Faculty in the Robinson College of Business, College of Arts & Sciences and Andrew Young School of Policy studies teach the sections.

Through panel discussions and company site visits, WomenLead participants learn what executive leadership entails and how female executives have succeeded. Students also talk with women one-on-one and discuss the arcs of their careers, lessons learned along the way, and information about specific fields, industries and jobs. The class culminates with each student completing a personal leadership strategy final project, which they present in poster format.

Veronica Biggins is managing partner of Diversified Search. She was one of the nation’s highest ranking women executives in banking when she left industry to join the administration of President Bill Clinton. During her tenure, she was vice chair of the U.S. delegation to the United Nations’ Fourth World Conference on Women in Beijing in 1995. Her engagement in civic and societal issues has included serving on the boards of the Georgia Research Alliance, Woodruff Arts Center and the International AIDS Fund. She received a Points of Light Award from President George W. Bush for her leadership as chair of the Czech Slovak American Enterprise Fund.