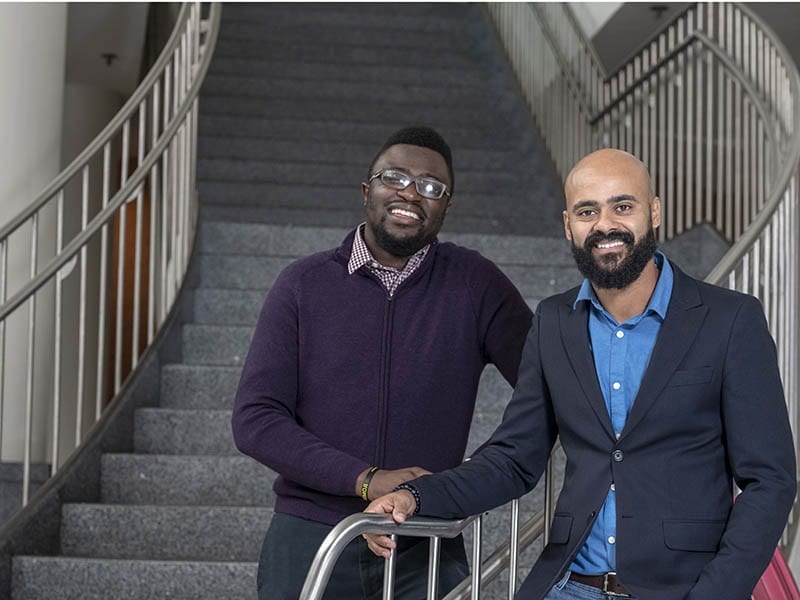 Olatide Omojaro is set to address morning attendees at the 10 a.m. commencement ceremony, and Alex Santos will deliver the afternoon address at the 2 p.m. ceremony.

Omojaro, a 2015 Perimeter graduate, is in the electrical and computer engineering doctoral program at Georgia Institute of Technology. He also is a published researcher and fellow at the National Science Foundation and Intel. Former President Barack Obama awarded Omojaro a 2016 President’s Volunteer Service Award for his work with African Researchers Academies for Women (ARA-W).

Omojaro, along with other students and alumni from Georgia Tech, Emory, Yale, Columbia and the Icahn School of Medicine at Mount Sinai, sit on the board of executives for ARA-W. The organization’s mission is to inspire and encourage female college students in West Africa to pursue stem (Science, Technology, Engineering and Mathematics) professions through undergraduate research programs.

Santos graduated from Perimeter with honors in May. Georgia State University recognized the Brazilian native as its 2017 International Undergraduate Student of the Year, in part for his role in co-founding MINA (Mentoring Initiative for New Americans). The Perimeter College organization helps refugee and immigrant students, mostly in the Clarkston, Ga., community, to navigate the processes involved in going to and succeeding in college.

Santos earned an associate degree in communications while at Perimeter and works in business development at an Atlanta branding agency. He’s also a visual artist, with murals and other public artwork displayed throughout metro Atlanta in places such as Old Fourth Ward, Little Five Points and downtown Decatur.

There are 820 candidates for graduation from Georgia State’s Perimeter College this December, ranging in age from 18 to older than 60. They are on track to receive associate of arts and associate of science degrees in 36 subject areas, including business administration, health sciences, engineering, radiologic technology and film and media studies.

Photo: Olatide Omojaro, left, will address attendees at the 10 a.m. commencement ceremony, and Alex Santos will deliver the address at the 2 p.m. ceremony. Photo by Bill Roa.