Is Bus Public Transit Access The Key In The Fight For Equitable Cities?

Can the humble bus be a key weapon in the fight for equitable cities? The experience of Atlanta suggests it could.

There is a positive relationship between increasing the reach of public bus service and the residential location of low-income populations, leading to a more equitable city. In our research, my colleagues and I found strong evidence the expansion of public bus transit in Atlanta led to an increased percentage of low-income residents. This suggests bus transit in both urban and suburban areas can increase residential opportunities for the poor and improve their access to much-needed resources and services.

Poverty is no longer a central-city phenomenon. In the United States more poor people now live in the suburbs than in the central cities. Several factors have contributed to the suburban population shift and metropolitan expansion, chief among them the expansion of the road and highway network.

Public transportation, although often struggling to keep pace, has also strived to provide accessibility within the expanding urban boundaries. But notably, with the long time horizon needed to plan and fund a rail system and its dependence on high population density to provide sufficient ridership, suburban service is mostly provided through bus transit. Given the reliance of low-income populations on public transportation, low-income riders, particularly in the suburbs, are a bus system’s primary clientele.

By the mid-1980s, the Atlanta region had a functional mass transit system composed of a heavy rail system in the city center and bus service that reached into the suburbs. In the 1990s, the demolition of public housing projects in the city forced affordable housing opportunities to the suburbs and MARTA to expand its bus services, making these neighborhoods more accessible.

If public transportation is one of the key factors that concentrates poor households in the central city, could this also be true for the suburbs as transit expands outside the city center? If so, the expansion of bus transit may provide an easily implementable and cost-effective policy to address the challenge of access to low-income housing.

Along with fellow Georgia State doctoral alumni, Rahul Pathak and Xi Huang (now at the City University of New York and the University of Central Florida, respectively) we tracked the evolution of bus service coverage in the Atlanta metropolitan area in tandem with poverty changes over time. We find the neighborhoods adjacent to bus public transportation consistently have higher proportions of poor residents, as defined by the federal government’s poverty threshold (click here for the most recent definition listed by  household size from the Department of Health and Human Services).

The maps below illustrate this expansion, depicting poverty (red) and public bus transit coverage (crosshatch). The overlap of the transit footprint with poverty remains as we statistically account for other factors that may influence the location of poor households, such as median rent, home values, population density and housing stock.

If you cannot view these maps, click here to view them in a new window. 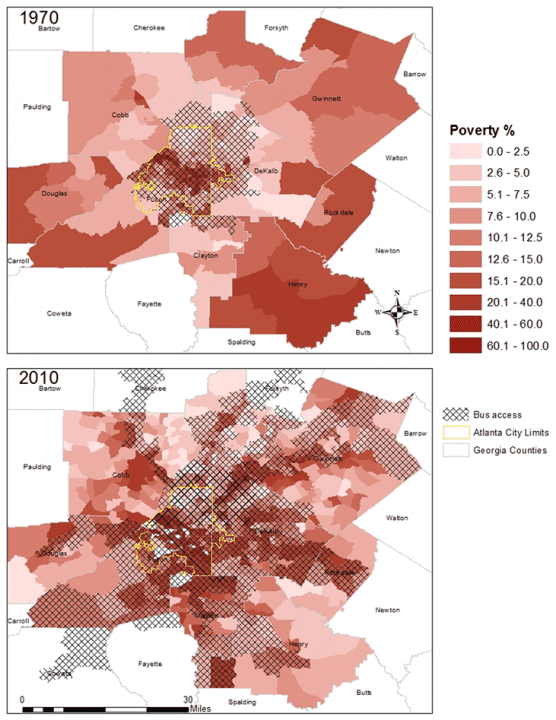 Extent of public transit access via bus service in the metropolitan Atlanta area versus federal poverty rate, 1970 versus 2010. Bus transit can be a key weapon in the fight for equitable cities.

Click here to access a copy of the study. If you cannot view the study, please contact Jeremy Craig at jcraig@gsu.edu or Jennifer Giarratano at jgiarratano@gsu.edu.

Chris Wyczalkowski is a postdoctoral researcher in the Urban Studies Institute at the Andrew Young School of Policy Studies of Georgia State University. He earned his doctorate in the school’s Department of Public Management and Policy, along with his research colleagues Rahul Pathak and Xi Huang.

Chris Wyczalkowski is a postdoctoral researcher with the Urban Studies Institute and the Disaster SMART Schools research project at Georgia State University. Wyczalkowski is an urban policy scholar with research interests related to the interaction of society with the evolving urban environment. His current research portfolio is focused on the effects of transportation systems on neighborhood change, and disaster recovery.