Since arriving at Georgia State, Austin Birchell (B.A.’20) has met with Bill Gates, been on NPR and become an ambassador of student success.

As one of the richest men in the world walked in to the room, Austin Birchell (B.A.’20) wiped his sweaty palms against his freshly pressed khakis before he shook his hand.

Bill Gates was at Georgia State to film a blog post on Georgia State student success initiatives. Birchell was chosen to be one of the select few students to meet and share his story with Gates.

“I just remember feeling a sense of shock,” Birchell said. “Sitting across from him, I couldn’t quite process what was happening.”

“Sir, it is extremely humbling to teach you, of all people, about a software,” he said to Gates.

The “software” he referred to is an intelligent chatbot, aptly called Pounce, Georgia State University had introduced to its students a year earlier. Birchell was one of them. 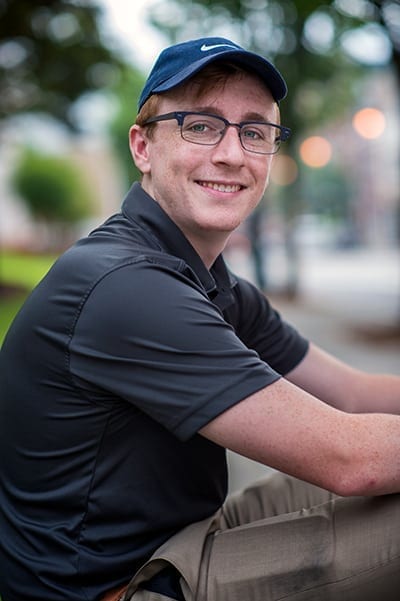 With his freshman year approaching, Birchell noticed his tuition price had not wavered from the full expense even though he worked hard to earn the Zell Miller Scholarship, which covered most of his tuition.

“I hadn’t planned to pay for a full tuition amount and I hadn’t taken any loans out,” he said.

That’s when Pounce alerted Birchell his scholarship should have already been received and directed him to the Financial Aid Office to fix the problem.

“Pounce was there for me,” Birchell said. “As a first-generation student, I didn’t have a parent or older sibling who had gone to college before me. Pounce ended up being exactly the guide I needed.”

Since then, Birchell has created a role for himself as an ambassador of student success for the university. Besides meeting with Gates, he’s been invited to speak on National Public Radio twice, met the U.S. Secretary of Education Betsy DeVos and was featured in the Chronicle of Higher Education. He’ll start an internship at the district office of Senator Johnny Isakson in August.

“I accredit the things I’ve done mainly to my mother, who always supports me to reach past my grasp,” he said, “and Andrea Jones, the associate vice president for public relations and marketing communications, for consistently trusting me to go onto national media and not embarrass myself or the university.”