ATLANTA—All attention turned to the future challenges facing public finance administrators and policymakers as more than 60 scholars from institutions across the country presented research and contributed to panel discussions at the Andrew Young School’s first invitation-only conference on “Public Finance and the New Economy.”

Faculty from around the country including John Mikesell of Indiana University, Kattalina Berriochoa from the University of Massachusetts, Carlianne Patrick of the Andrew Young School, and Pengju Zhang of Rutgers University, presented on topics such as the state and future of general sales taxes, why public spending on education varies in rural and urban areas, the future of property tax exemptions, and the impact of village dissolutions on property values. They were joined by practitioners like Charlotte Otabor, an economist for Washington, D.C.’s, Office of the Chief Financial Officer, who spoke to the role of the earned income tax credit on migration within the District of Columbia. 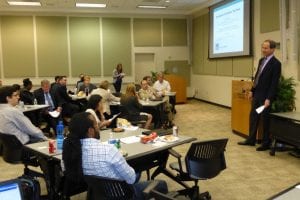 “The new economy could make tax bases harder to capture as people and information move more quickly and jobs are less constrained by physical workplaces. Budgeting and financial management experts must work with policymakers, data and IT infrastructure to find the new path to sustainable public finances,” said Dean Sally Wallace, director of the Andrew Young School’s Fiscal Research Center.

“We hope to see that the research and findings shared at this conference will eventually be widely distributed as published articles which will help policymakers and public administrators find solutions to the challenges we are all working to address.

“Given these issues and more, we plan to bring together the best minds in public finance annually to discuss both the challenges and potential policy solutions.”

The conference was sponsored by the Andrew Young School Dean’s office, the school’s Center for State and Local Finance, Fiscal Research Center, and the Dan E. Sweat Distinguished Chair in Educational and Community Policy. 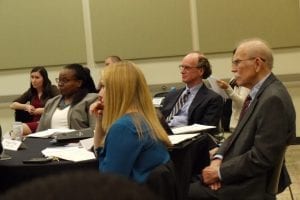 During the program, Professor David Sjoquist, founding holder of the Dan E. Sweat chair and founding director of the Fiscal Research Center, was celebrated for his 50 years of public finance scholarship and service.

“The digital revolution has had a profound effect on the economy, and in turn has significant implications for local government revenue,” he said. “The new products, new methods of production and distribution, and new organizational forms are affecting local governments, which are struggling to align their tax structure to this new economic realty.”