A cornerstone of the Center for Access to Justice’s Pro Bono Program is the Alternative Spring Break, which allows students to spend a week immersed in a substantive legal area while engaging in related pro bono service. For the second year, the spring break program received more applications than available spots.

Students vied for the opportunity to spend a week either in Atlanta, partnering with the Atlanta Volunteer Lawyers Foundation (AVLF) and Truancy Intervention Project to learn about the impact that housing instability can have on education, or in Lumpkin, Georgia, with the Southern Poverty Law Center’s Southeast Immigrant Freedom Initiative, representing immigrants in detention at the Stewart Detention Center.

For the two groups of students who participated, the lessons learned will shape their legal education and impact them throughout their careers.

“The Alternative Spring Break is one of the core components of our Pro Bono Program and for good reason,” said center Assistant Director, Darcy Meals. “In just one week, students see firsthand the power law can have, for better and for worse, and they realize their own ability to make a concrete difference.”

Early Monday morning, 12 Georgia State Law students signed in to visit the Hollis Innovation Academy, an Atlanta Public Schools K-8 school in Vine City/English Avenue on Atlanta’s west side. For the two hours that followed, the Georgia State students met the many individuals tasked with providing comprehensive “wraparound” services at what was once a failing school.

Diamond Jack, the school’s principal, explained the importance of fostering a welcoming climate for students and putting students at the center of every choice they make. Representatives from Atlanta Public Schools were on hand to echo that sentiment and detail some of the many external partnerships – with Chick-fil-A Foundation, Westside Future Fund, the Arthur Blank Foundation, Georgia Institute of Technology and Coca-Cola, among others – that make it possible for Hollis to provide robust services not typically available in most public schools.

Meagan Turner (J.D. ’20) volunteering at the Boys and Girls Club in Atlanta.

Hollis, which focuses on STEM education, has a food pantry, a health clinic at which students and their families can receive comprehensive care, a community garden, two social workers through Communities in Schools, and a community advocate and lawyer through AVLF’s Standing with Our Neighbors Program.

The influx of resources and support at Hollis stand in stark contrast to what many of the students see at home. The Georgia State students visited some of AVLF’s clients in the neighborhoods surrounding Hollis.

Many live in deplorable conditions, enduring overflowing sewage in their bathrooms, nonfunctioning ovens in their kitchens, rodent infestations, and holes in the walls, floors and ceilings. Mold is a mainstay. Despite repeated attempts to get their landlords to remedy the issues, many tenants have heard nothing or have received “repairs” using duct tape or other shortcuts that did not fix the problems.

Others fall victim to unlawful or repeated eviction, as the Georgia State students witnessed when they observed Fulton County Dispossessory Court. For kids living in such unstable housing, it is difficult, if not impossible, to remain focused in school.

AVLF’s Standing with Our Neighbors Program is working to change that. By placing a community advocate and a lawyer within the school, AVLF makes it more likely that parents and families will identify the issues for which they need legal assistance and will have the opportunity to actually receive it. Knowing their rights and having a lawyer to help enforce those rights means that parents can resolve some of the issues that might have previously resulted in students having to miss school or transfer. In just one year, Standing with Our Neighbors contributed to a 36 percent reduction in annual enrollment turnover at one of its schools.

The Georgia State Law students were able to visit three Standing with Our Neighbors sites – Hollis Innovation Academy, Gideons Kindezi, and Thomasville Heights Elementary. They also met with lawyers from the Truancy Intervention Project to observe juvenile court and learn how the juvenile system handles absenteeism for some of Atlanta Public Schools’ most vulnerable students. At the end of the week, they volunteered at the Boys and Girls Club and spent their Saturday morning at a community-building event called Turn Up Turn Out at Thomasville Heights Elementary School.

“The further I get in law school, the more I realize that there’s always a point where fields of law intersect,” said Lillian Henry (J.D. ’20). “I didn’t understand why we were starting the week touring an elementary school, but by the end, that was my favorite part. Now I see how something seemingly unrelated has such an impact somewhere else.”

The Atlanta students not only saw how unstable housing can impact school performance and how systemic poverty limits opportunity from such an early age, they also learned how valuable it is to have a lawyer’s assistance.

“It was so encouraging to see that, despite the challenges, there are people dedicated to those kids,” said Charles Theodore (J.D. ’19), who led the Atlanta trip along with Danielle Pollack (J.D. ’19). “That’s why I came to law school, and it’s what I’m passionate about, so it’s encouraging to see that my help matters, and I can make a difference.” 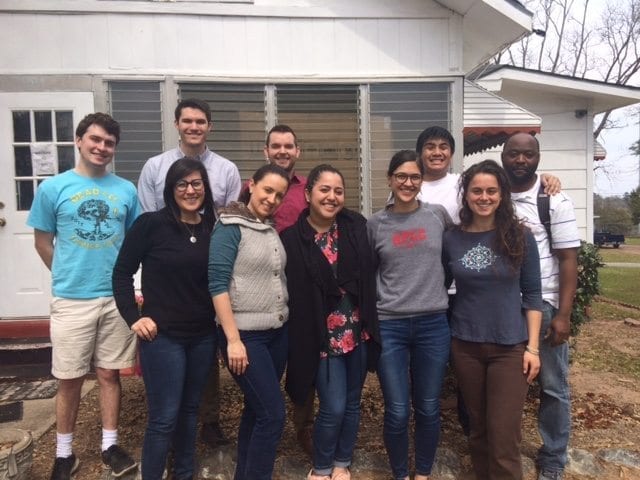 Meanwhile, over two and half hours southwest of Atlanta in the rural town of Lumpkin, Georgia, a group of seven Georgia State Law students and a volunteer attorney spent the week at Stewart Detention Center, working with the Southern Poverty Law Center’s Southeast Immigrant Freedom Initiative (SIFI).

The Stewart Detention Center is a prison that has been converted into a for-profit detention center housing more than 1,700 immigrants. Although detained immigrants have a constitutional right to due process and to an attorney, only about one in six detained individuals in the Southeast have lawyers in removal proceedings. This lack of counsel can be fatal to an immigrant’s case: immigrants with legal counsel are more than 10 times as likely to succeed in their cases.

SIFI seeks to address this problem by inviting pro bono attorneys, interpreters, and supervised law students to spend a week working in immigration detention centers. The Georgia State students were the second group of law students to come to Lumpkin, Georgia, to help with this effort.

After a thorough orientation, the Georgia State Law students started visiting with clients and potential clients at the Stewart Detention Center. They quickly learned that even if a client is represented, there are many obstacles to providing representation. 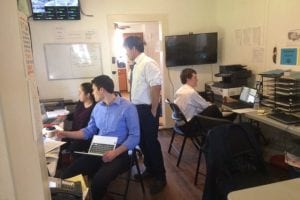 On multiple occasions throughout the week, students waited over an hour—sometimes longer—to meet with SIFI’s clients and potential clients because there are only three attorney visitation rooms for the entire detention center. One interpreter working with the students had to remove her bra to pass through metal detectors because the guards did not want to use the wand.

Attorneys were not allowed to bring cell phones, computers, or other electronic devices into the waiting areas or meetings with clients, and they had to confer with clients through a glass barrier using phones. Only case files and writing instruments are allowed inside.

In detention, immigrants have little ability to access the outside world. Use of phones is restricted and expensive, reportedly up to $5 for 20 minutes. Given the wages that detained immigrants are paid for their work—clients report being paid one dollar an hour—a detained immigrant might have to work all day for one quick phone call, only to have the line disconnect. Immigration detention has all the trappings of prison, but immigration offenses are civil violations, not crimes.

Many of the clients the students met with at Stewart are seeking asylum or have lived in the United States for many years and have U.S. citizen spouses and children. These individuals have been detained for months or even over a year as their cases crawl through the system.

The Georgia State students observed Immigration Court and saw firsthand how swiftly “due process” was delivered. The courts were packed with detainees, and students watched as one after another went before the judge and deportation orders were entered through an interpreter, without the benefit of an attorney. These decisions, rendered in a matter of minutes, sent people back to a country that they may not even recognize as home, and for some, a place where they justifiably fear for their lives. 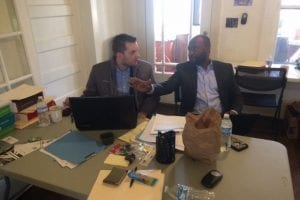 While the conditions and the work were difficult and discouraging, the students were empowered by their experiences. They were able to obtain information and documents from clients that will be crucial to their cases, and they completed research projects that will help SIFI advocate for its clients.

“Where detainees so clearly felt hopelessly lost within the system, I will never forget the way their faces lit up when they realized we were going to help them,” said Christine Rodriguez (J.D. ’20).

Trip leader Stephen Swanson (J.D. ’20) said, “Alternative Spring Break was a great opportunity to apply what I’ve learned in the classroom for the benefit of an underserved immigrant detainee population.”

Despite the disheartening circumstances they witnessed in both Atlanta and Lumpkin, the two groups returned to school inspired and armed with the knowledge that they can make a difference, not just after law school, but right now as students.

Emily Gaston (J.D. ’20), who went on the Atlanta trip, said “I went to law school to problem solve, and this trip allowed me to see how much I’ve learned after the tunnel vision of 1L year. It’s a privilege to use that knowledge to help people.”

Garrett Groos (J.D. ’20) said of the week, “I’ve done service my whole life, but this was my first peek into the impact a lawyer can have.”

It may seem counterintuitive that dedicating vacation time to service, especially in the midst of law school, could be motivating and energizing, but for the 19 students involved in the Center for Access to Justice’s Alternative Spring Break program this year, there is no doubt that it was.