ATLANTA—More than 200 distinguished guests including top law enforcement leaders, members of the diplomatic corps, elected officials and leaders in the business community, gathered at the Federal Reserve Bank of Atlanta in November to recognize and honor the Georgia International Law Enforcement Exchange (GILEE) at its 25th Anniversary Gala.

“Sandra and I are honored to have GILEE in our capital city,” said Gov. Deal, the keynote speaker. He then described several law enforcement advances in Georgia, including increases in in trooper training enrollment, 20 percent salary raises for state officers and the state’s nearly $60 million investment in the new Cyber Security and Innovation Training Center in Augusta.

“GILEE, with its peer-to-peer training partnerships during the last 25 years, has improved law enforcement in Georgia by encouraging camaraderie and the exchange of meaningful and helpful information,” he said. 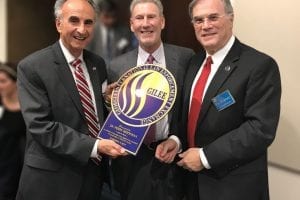 “The sharing of information, for those who have a common purpose like good law enforcement, stronger communities and safe streets, is essentially important to see that law enforcement works hand-in-hand with the private sector and with government to see to it that its citizens are protected. Tonight’s 25th anniversary celebration is a tribute to all those who have contributed in the past and is a statement of the future. We’re going to continue to work together, share information and make our communities safer and better for the best interests of our countries and our people,” he said.

“I want to thank a lot of people, certainly Georgia State University for having the program and helping police officers and law enforcement to understand and solve the problems facing us today,” said Marcus. “A few years ago Secretary (George) Schultz and I happened to meet one of the delegations in Israel and he was astounded by this program and thought it should be done in every state of the union.”

GILEE now focuses on enhancing homeland security efforts in the U.S. and at major sporting events around the globe through international cooperation and public safety training programs. To date, GILEE has carried out more than 440 programs and produced 1,500 graduates of its annual peer-to-peer training program in the U.S. and around the world. Of those programs, more than 200 special briefings were provided to more than 31,000 law enforcement officers, corporate security personnel and community leaders. GILEE works with more than 25 states and more than 25 countries and has provided significant assistance to several Olympic security efforts.

Joining the anniversary celebration was speaker Vernon Keenan, director of the Georgia Bureau of Investigation, and a member of GILEE’s first counter-terrorism training delegation to Israel in 1993.

“GILEE, the finest public safety leadership course in the United States, has taught me this,” said Keenan. “There is a true brotherhood of the badge across the U.S. and across countries. We want to serve and protect. We are honored to have GILEE in the state of Georgia.”

Following Keenan were Colonel Mark McDonough, Commissioner of the Georgia Department of Public Safety; Louis Dekmar, President of the International Association of Chiefs of Police and Chief of the LaGrange Police Department; Col. Yitzhak Almog, Israel Police Attaché to North America, who emphasized the “mutual benefits of the relationship between the Israel Police and police forces in North America”; and George Turner, retired Chief of the Atlanta Police Department (APD).

“In law enforcement, you can’t go to a better training ground than to the State of Israel,” said Commissioner McDonough.

Chief Dekmar acknowledged “the impact that GILEE had on understanding and supporting international law enforcement cooperation.” He emphasized, “One invaluable experience of GILEE training is its adherence to and respect for civil rights and the U.S. Constitution. You don’t sacrifice civil liberty for safety.”

Dr. Perry Brickman and Dante Stephenson were the evening’s honorees for their longstanding support of GILEE. Dr. Brickman was instrumental in supporting Dr. Friedmann’s efforts in founding GILEE. They received their awards from GILEE Board Chairman Jay Davis, chairman and CEO of National Distributing Company, who was one of many key supporters of the gala.

“As the president of the Jewish Federation of Atlanta 25 years ago, I had the foresight to meet with Dr. Friedmann, then the head of the criminal justice program at Georgia State University,” said Brickman. “He was asking for the federation’s support. This meeting led to providing the seed money to kick-start GILEE.”

Retired Chief Turner, who was credited with “ushering the Atlanta Police Department into a new era,” is now Vice President of Safety and Security with the Atlanta Hawks. His GILEE training in Israel gave him two key ideas he brought to fruition in the APD: the Video Integration Center and Atlanta Leadership Institute.

“I am so thrilled to have had the opportunity to partner with GILEE and command leaders from around the state to move our profession forward,” he said.

Dr. Friedmann commented that he was awed by the evening.

“We thought GILEE was over after the 1996 Olympics because we’d achieved our mission,” he said. “We then opened statewide and nationwide due to tremendous demand. GILEE is an amazing opportunity to make a difference as our graduates provide better service to the communities they serve.

“I’m very proud of GILEE being a part of the law enforcement community here, overseas and in states like Alabama, Florida, New York, North Carolina and Tennessee. We could not have done it without all of your support.”