Rocket Engineer Says Perimeter Was His Doorway to Opportunity 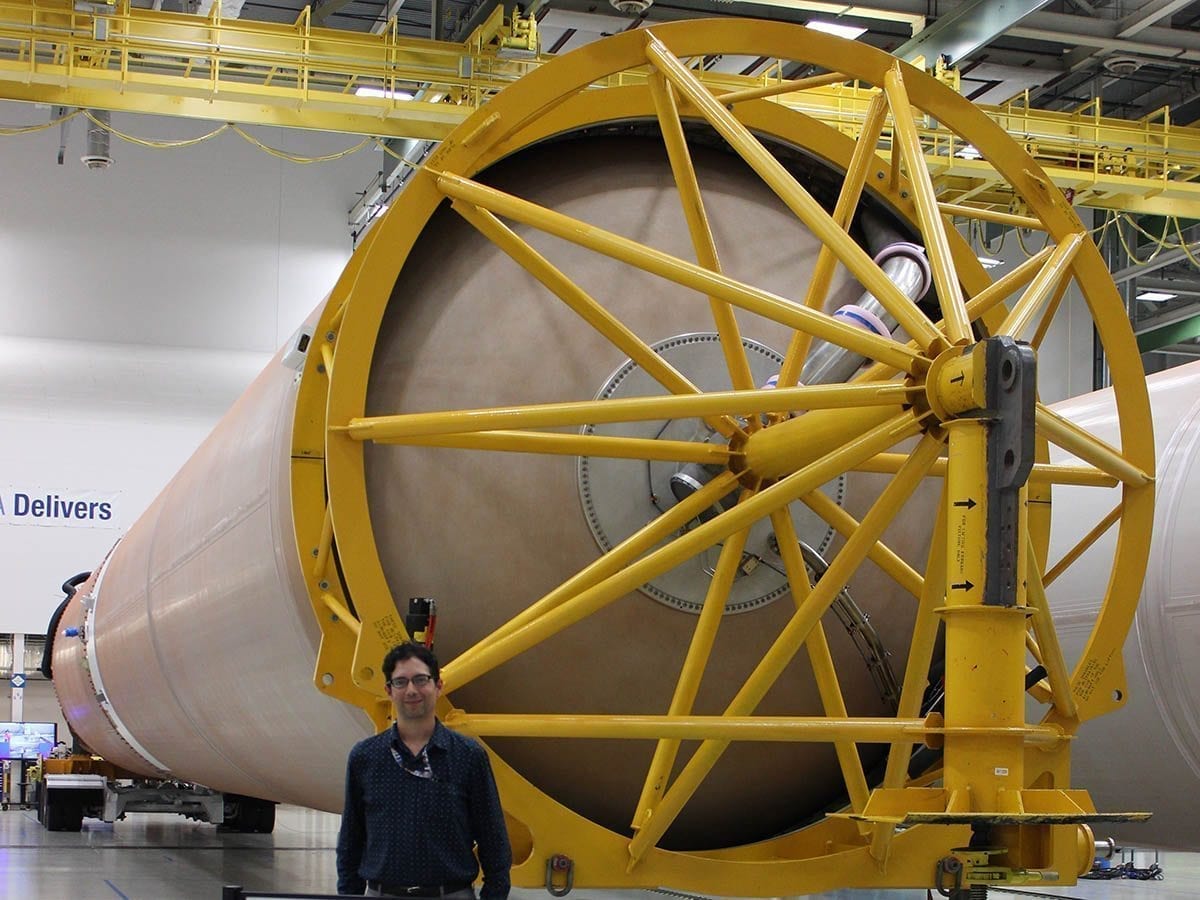 ATLANTA—Ryan Gutierrez isn’t a rocket scientist, but his family insists on calling him one.

“They like saying that I’m a rocket scientist, and I have to correct them,” the Georgia State University Perimeter College graduate said, laughing. *(Please see update below.)

Gutierrez actually is a structural engineer who works on rockets, and he’s among the newest hires at United Launch Alliance—a joint venture of Lockheed Martin Space Systems and Boeing Defense, Space & Security. ULA is one of the nation’s largest rocket manufacturing companies supplying the United States Department of Defense.

Gutierrez landed a position at ULA last spring, only a couple of years after graduating from Perimeter. At 34, it’s his dream job and one that took root when he was a young boy watching televised rocket launches and visiting the National Air and Space Museum in Washington, D.C., with family.

“That was kind of what really drove my interest in the subject matter,” he said of the museum trip at age 8.

These days, Gutierrez keeps busy at ULA’s 1.6 million-square-foot facility in Decatur, Ala., ensuring that the Atlas V rockets he works on are structurally sound.

“When you’re standing right next to a booster that’s going to be shot up into space in a few months and you’re thinking ‘we’re going to make it happen,’ that feels great,” he said.

Gutierrez took a circuitous path to becoming a rocket engineer. After graduating from high school in Arkansas, he enrolled in college, but wound up quitting after only a year.

Then he married his high school sweetheart, Megan Levacy, and they moved to Tennessee. While she pursued her interest in being an artist and educator, Gutierrez worked for several telemarketing companies, as well as AT&T, handling tech support.

He’d never heard of Perimeter College until his wife was offered a position as an art instructor on the school’s Dunwoody Campus. It was during this time that Gutierrez learned about Perimeter’s Regents’ Engineering Transfer Program (RETP), which enables qualified students seeking a bachelor of engineering degree to begin their curriculum study at Perimeter, then receive high consideration for a seamless transfer to the Georgia Institute of Technology. (RETP now is referred to as Regents’ Engineering Pathway or REP.)

At age 30 and figuring this was his chance to once again follow his dream, Gutierrez declined an offer for a job transfer to Atlanta and instead enrolled in classes at Perimeter.

He also became an ENLISTEM Scholar. ENLISTEM, which stands for Educate and Nurture Leadership in Science, Technology, Engineering and Math, was funded by the National Science Foundation as a five-year grant program. It provided the academic and financial supports Gutierrez needed to immerse himself in his studies and graduate with honors from Perimeter College and, later, Georgia Tech. He graduated from Georgia Tech in May with a mechanical engineering degree.

“Perimeter was really the doorway that opened up all these opportunities for me,” Gutierrez said, adding that the ENLISTEM exposure and experiences enabled him to build his resume—even as a student. He said he benefitted highly from attending workshops led by STEM (Science, Technology, Engineering and Math) professionals and visiting elementary schools to introduce young students to STEM careers.

“He always went above and beyond by helping us with our Elementary School STEM Nights and Career Days, even after he left Perimeter College,” math professor Dr. Marjorie Lewkowicz, who co-directs Perimeter’s I Am STEM program and supervised the ENLISTEM program, said about Gutierrez.

Although his days now are filled with the intense responsibilities of rocket engineering, Gutierrez is enjoying his new role as a STEM professional who can inspire others.

“I hope it helps some other students recognize that they can achieve their goals, even if it may take a slightly scenic route to get there,” he said.

Check out this video of a United Launch Alliance live rocket launch from earlier this year. Perimeter College graduate Ryan Gutierrez is a ULA engineer who conducts strength analysis on the Centaur tanks for similar rocket launches. The tanks are part of the Atlas V rocket’s upper stage.

* Article Update: In October, ULA changed the classification of the technical engineers working on rockets with the company. As a result, in addition to Gutierrez’s normal job title of structural engineer, he says he now also has the title of “rocket scientist” as well.

“I guess it was only a matter of time before my family was right about calling me a rocket scientist,” Gutierrez said, adding that his wife says the jokes basically write themselves now: “It’s not like it’s rocket science!”