A Dream Made Real

A Dream Made Real

English ivy frames the bay doors of Cherrylion Studios, an offbeat industrial warehouse tucked away on a narrow one-block street in Atlanta’s Berkeley Park neighborhood. Here, over the first five months of 2017, owner and sculptor Martin Dawe (B.V.A. ’80) shaped more than 800 pounds of clay into a striking figure of the Rev. Martin Luther King Jr.

Shepherded through an ancient, painstaking process called “lost-wax casting,” that eight-foot portrait of the greatest American civil rights hero now rises in bronze outside the Georgia State Capitol at the corner of Capitol Avenue and Martin Luther King Jr. Drive. 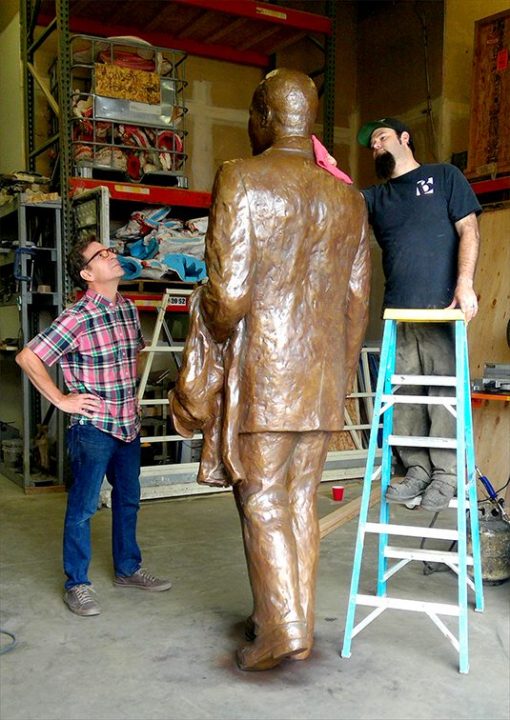 Georgia Gov. Nathan Deal revealed Dawe’s statue Aug. 28, more than three years after he signed a bill authorizing its construction and installation on the Capitol grounds. The first sculptor appointed to the task, Andy Davis, died in a motorcycle accident less than two weeks after accepting the commission in 2015. Following extensive research and review, the Capitol Arts Standards Commission appointed Dawe, one of four final candidates, to assume the project a year later.

To honor the memory of the late sculptor, Dawe modeled King in a pose inspired by the 1956 photograph Davis had selected. However, his sculpture reveals the civil rights leader as he was in 1963, moments after recasting American history from the steps of the Lincoln Memorial with his “I Have a Dream” speech — his face teeming with confidence, shoulders relaxed, a palpable peace suffusing throughout his body.

With almost four decades of professional sculpture experience, Dawe says King’s statue, funded entirely by private donations, was the most daunting portrait of his career.

“He had the most elusive features — extremely hard to capture,” he said. “You can look at 20 photographs of Martin Luther King and not recognize half of them. There are statues of him all over the country, and hardly any of them look like the same man. The whole thing was just a little bit scary.”

Dawe modeled his statue’s pose using this 1956 photograph of King in Montgomery, Ala., during the bus boycotts.

Dawe is far from the first artist to wrestle with accurately depicting the Atlanta civil rights hero, and he hopes his handiwork can help repair a tragic legacy of King statuary that’s rife with contention, controversy and vandalism. The litany of outrageous fortunes that have plagued these monuments includes:

Apprehension naturally attends any attempt to take up the mantle after all that, but Dawe is hopeful.

“I think it looks like him,” he said. “But I was waking up at 4 o’clock every morning wondering if I got it right.”

Getting things right happens to be Dawe’s hallmark, however, and the master sculptor took great pains to convey King’s distinctive qualities of body and spirit — the contours of his face as well as his courage and charity.

For half a year, Dawe sculpted in the shadow of a giant print of that 1956 photograph while a computer played video footage of the “I Have a Dream” speech and subsequent news conference on endless loops. (“I watched them millions of times,” Dawe said.) Surrounded by worktables awash in diagrams and bookmarked biographies, he also made continual reference to a large poster covered in three dozen more photographs he’d collected to showcase the spectrum of King’s angles and postures — and ever so slowly molded the man out of mud.

By immersing himself in study, Dawe was working to ensure King’s life and likeness eclipsed Dawe’s own imprint.

“You have to keep a distance with portrait sculpture — as if somebody else is doing it,” he said. “You have to look at it as if you’re seeing it a year later. Otherwise, you’ll grow attached to it and end up making a mistake. Because once it’s in bronze, that’s it.”

Born in South Africa, Dawe emigrated to the U.S. with his family when he was 2 years old and grew up in the Northeast, loving art from his earliest days.

Though Dawe claims he doesn’t draw or paint that well, he concedes that even his very early work exhibited a keen bent for three-dimensional thinking that others recognized.

“Sculpting is a very specific way of looking at the world,” he said. “It’s very meditative. It’s having your hands in mud — godlike, dirty and creative.”

Dawe studied figurative sculpture in the late 1970s as an undergraduate at Boston University, where he learned the traditional French and Italian techniques for making shapes out of water-based clay. These are rare skills in the 21st century. According to Dawe, many of his contemporaries unwittingly adopt a rigid and literal perspective on sculpture when they teach themselves the craft without training in these old-world methods.

“It’s an enormous difference, and that’s what I specialize in — still being able to sculpt in that old painterly way,” he said. “You don’t necessarily sculpt the obvious. You’re drawing in light and shadow — using them to infer, not to define perfectly. It’s much more creative.”

To illustrate the difference, Dawe compares shoes on a few statues.

“Someone who hasn’t been taught figurative techniques will often make shoelaces by rolling up a coil of clay, tying it into a bow, and sticking it on the shoe,” Dawe said. “Whereas I’ll put a lump of clay on the shoe and pull out a shoelace.”

From Apprentice to Master

Once grounded in the fundamentals of European sculpture, Dawe transferred to Georgia State where he learned how to combine his craftsman chops with conceptual artistry and even make a living at it.

During Dawe’s senior year in 1980, a faculty member connected Dawe with Atlanta sculptor Julian Harris, an established artist in his 70s who needed an apprentice. Perhaps best known for “Rehabilitation,” a frieze above the entrance to the State Prison in Reidsville, Ga., Harris sculpted on commission for decades. Though his decorative adornments, bas-relief carvings and busts once peppered building façades throughout the city, many of Harris’ works are now lost, the unfortunate victims of urban renewal.

After graduating from Georgia State, Dawe continued to work at Harris’ studio for several more years. College basketball fans are probably familiar with Dawe’s first commission as Harris’ protégé: The NCAA’s Naismith Trophy, which he created in 1980 and is still in use today.

“Everyone knows it’s really difficult to make a living as an artist, but it’s much harder than you think,” Dawe said. “There are very few people who actually make a living with art. Working with Mr. Harris, though, I learned how to do commercial work. He got my career going.”

After Harris died, Dawe founded his own studio in 1987 before establishing Cherrylion in 1994. The studio now supports three commercial sculptors, including Ty Nicholson (M.F.A. ’16).

“People just come to us now, but it took a long time before I could live off the work,” Dawe said. “I waited tables, renovated houses and borrowed a lot of money for almost 10 years.”

Dawe’s fruitful training under Harris led the young artist to discover one of his greatest gifts: collaboration.

“I have sculptor friends who would never do a commission piece,” he said. “They can’t imagine working with another person whereas that’s my nature. I really enjoy it.”

Dawe credits commission art with allowing him to transcend a traditional studio vocation.

“To do commission work, you’re doing something that’s bigger than yourself and coming up with very original solutions to solve problems and meet goals, situation by situation,” he said. “When do you get to do that in the studio by yourself? For me, this gives purpose, but it’s the exact opposite for other artists.”

Installed in one of the Capitol’s most visible locations, Dawe’s statue of Atlanta’s dearest cleric and hero stands atop a natural theater eight feet above the street — a permanent fount of inspiration and a reminder of how far we’ve come, both sorely needed in these days of national unrest.

“I feel so lucky, so fortunate I got to do this,” Dawe said. “Here’s a man who wrote speeches quoting classical literature while he was in jail with no references. It gives me goosebumps to think about how brilliant he was and how he changed the world so completely. We take a lot of it for granted now.”

Perhaps thanks to Dawe’s handiwork — King’s immortal figure, eyes to the east, his shadow extending across Capitol Square — we’ll stop doing that.