A storied trumpeter and crooner, part-time instructor Joe Gransden (B.Mu. ’94) is one of Clint Eastwood’s favorite musicians.
Use Scan QR Code to copy link and share it
By Benjamin Hodges (B.A. ’08)

Joe Gransden and his custom-made Monette trumpet played 348 jazz gigs in 2016 — sometimes as many as four per day. 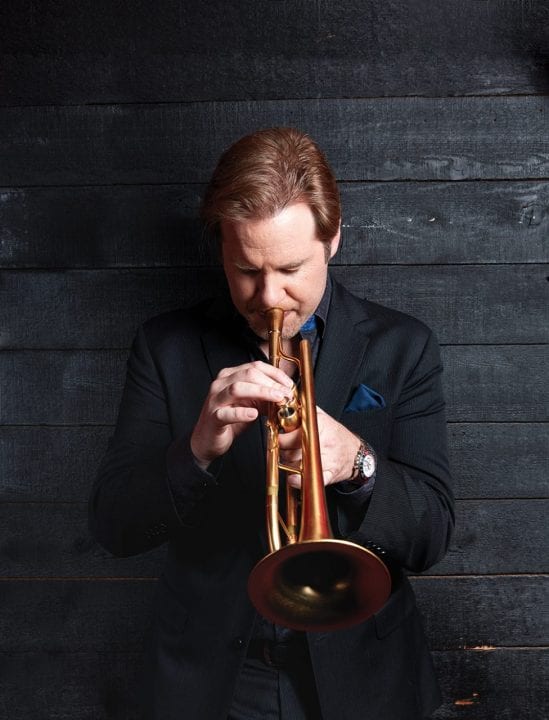 “I might play a recording session for a TV commercial in the morning, a cocktail party in the afternoon, a wedding in the evening and a concert late that night,” Gransden said, his baritone rich and warm. “It was a great year — an exhausting year — but as a freelance artist, I don’t know how to say ‘no.’ When opportunities come, I’m going to take them.”

Since starting a career as a professional musician in 1993, Gransden has released 16 records and now leads one of the few genuine big bands in the country (Joe Gransden and His Big Band), keeping the beloved classic genre alive and well in Atlanta and beyond.

One of Atlanta’s principal jazz mainstays with regular gigs at Venkman’s and Café 290, Gransden plays primarily throughout the southeast, but he takes his band on the road about six times a year — especially for one gig in particular. For more than a decade, he and his crew have played at a private golf club in Carmel, Calif., called Tehàma, which belongs to renowned actor, filmmaker and jazz enthusiast Clint Eastwood.

Many years ago, a friend suggested Gransden try to get his music in the hands of some celebrities and music magnates. Gransden was willing to give it a shot but balked when his friend told him he could drum up a mailing address for Eastwood where Gransden could send one of his records with a short note. “Man, you can’t just mail a CD to Clint Eastwood,” he demurred.

But he did. And a few weeks later, he got a phone call from someone claiming to be Dina Eastwood, the star’s wife. Gransden thought it was a prank until, in the background, he heard Eastwood’s unmistakable rasp and growl: “Hello, Joe.”

The Eastwoods were calling to invite Gransden out to Tehàma the following month to play golf and perform in front of the club’s exclusive membership. The gamble had paid off. 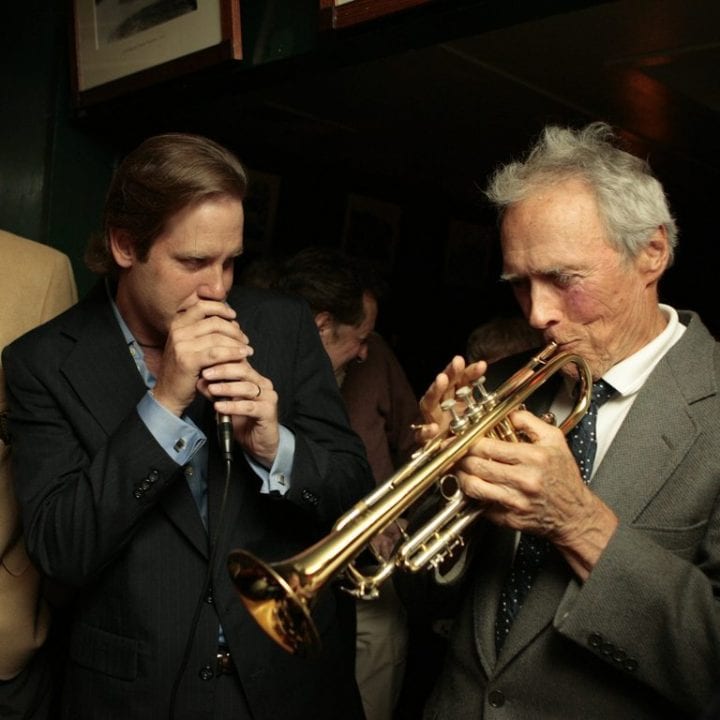 On the greens, Eastwood and Gransden bonded over jazz history and cemented a lasting friendship after just a few minutes together. Blue Mitchell, Chet Baker, Miles Davis, Clifford Brown, Dizzy Gillespie — Gransden’s longtime heroes — came alive as Eastwood related firsthand stories about the musicians from his days in Los Angeles during the 1950s.

“After that, we were basically friends,” Gransden said. “I love him. He’s obviously an incredibly talented guy, but he’s a cool dude, too. Ten minutes with him, and you forget who he is because he’s so down to earth.”

Eastwood penned Gransden a stellar endorsement that describes him as a “great new talent” with an “old soul” and “classic voice” who “plays a hell of a trumpet” — big words from a man with gospel-like clout in the jazz world.

Jazz is in Gransden’s blood. His father, Robert Gransden, is a professional jazz pianist and singer who continues to perform, and his grandfather, William Ashton Gransden, played with Glenn Miller and Joe Venuti as one of New York City’s top trumpeters during the 1930s and 40s. From his earliest days, Gransden loved to sit outside his grandfather’s door and listen to him practice, and it didn’t take long before his grandfather bought him his first horn.

“I loved everything about it,” Gransden recalled. “I loved the smell of the valve oil and the glint of the gold. It was so endearing to me.” Over the years, Gransden’s grandfather gave him lessons, sent him records in the mail and, when he died, left him his 1931 handmade Bach, which he keeps on display at his house.

A native of Yonkers, N.Y., Gransden grew up in nearby Buffalo and started studying trumpet performance at the State University of New York at Fredonia. He had just finished his sophomore year when he was invited to try out for a part with the Tommy Dorsey Orchestra, one of the great mid-century big band ensembles, who were about to embark on a global tour. 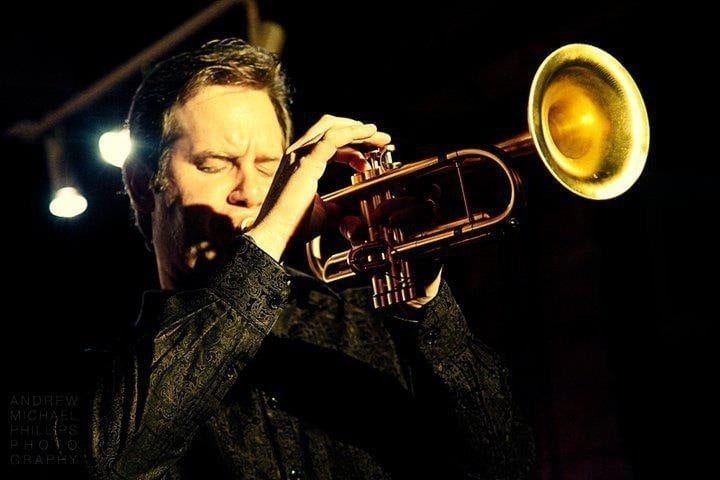 Gransden won the audition and put school on hiatus to play shows all over Europe and South America instead. After a year on the road, he returned stateside and joined his parents in Atlanta, where his father’s employer had relocated them while Gransden was abroad. In time, he transferred to Georgia State, where he soon sat at the feet of Gordon “Doc” Vernick, professor of jazz studies and acclaimed trumpeter. Doc helped Gransden snag a scholarship and dragged the budding student through a rigorous diet of jazz history and language.

Doc teaches that, to become great, students must first learn the history and language of jazz before they can play — that is, speak the jazz language through their instruments. And that means hard work. For instance, Doc liked to send Gransden home with classic LPs full of mind-bending solos to transcribe and, upon reviewing his work, assign him transcriptions of the same solos in the other 11 keys.

“We call it ‘lifting a solo,’” Gransden explained. “It means nailing every note. It’s brutal. It’s very difficult. It takes forever. But it trains your ears, and that’s what you need to learn a language.”

Doc gives Gransden more credit. “Joe came to me with excellent technique and good sound,” he said. “He was motivated and easy to teach. He knew what he wanted to do. I just needed to point him in the right direction.”

At Georgia State, Gransden met his wife, Charissa (B.Mu. ’97), and secured the chops and connections he’d need to grow into a rich career. For instance, when Gransden founded his big band several years later, he loaded it chock full of Georgia State faculty and alumni, including Kevin Bales, Geoff Hayden, Mace Hibbard, Justin Varnes, Gordon Vernick, Mike Walton (M.Mu. ’14) and Wes Funderburk (M.Mu. ’05), the band’s arranger. Gransden credits Funderburk’s arrangements with giving the band its own unique sound, a fresh new take on a classic genre too often immured within rigid confines, which has helped attract a wider audience, young and old.

Now 46, Gransden wants to see a new love for jazz catch fire with the new generation. That’s why he’s hosting Joe’s Jazz Camp this June at Cambridge High School in Milton, Ga. He’s confident it will be the first of many.

“We’d been trying to develop a jazz camp for years before Joe, an Atlanta jazz great, offered to bring one to us,” said Edward Spurka, principal of Cambridge High School. “Everyone is looking forward to it.”

“I’m at a point where I want to start giving back,” Gransden said. “I want to spread the knowledge I got from Dr. Vernick and keep this music alive through our youth.” 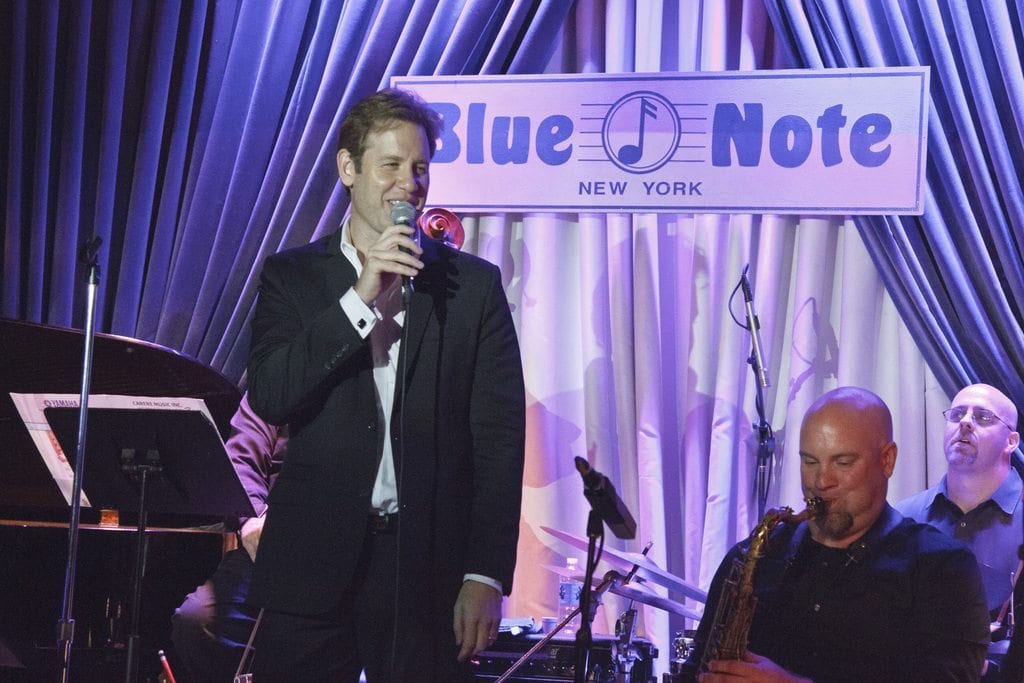 Gransden and his 16-piece big band play at New York’s legendary Blue Note every year. Their next show is on July 10, 2017. For tickets, visit bluenote.net. From right: Justin Varnes on drums, John Sandfort on saxophone. (Photo courtesy of Joe Gransden.)