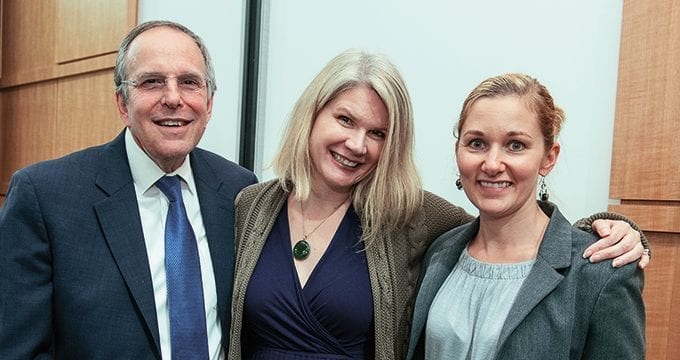 Steve’s leadership has benefited students in numerous ways. Perhaps the most obvious is our beautiful law building, which would not exist without Steve’s leadership over a period of years,” said Kelly Cahill Timmons, associate dean for student affairs.

Steve’s leadership has benefited students in numerous ways. Perhaps the most obvious is our beautiful law building, which would not exist without Steve’s leadership over a period of years. In designing the building, Steve was a proponent of the idea that the best floors should be for the students, which led us to put the Law Library (rather than faculty or administrative offices) on the top two floors. He also supported putting classrooms and faculty offices together, to promote student-faculty interaction.

“Steve has been a driving force behind our rise in rankings and our increasing role as the school of choice for prospective law students.” –Mary Radford, professor of law

Even though Georgia State Law is deservedly proud of being named one of the best values in legal education, Steve has always been aware of the fact that the cost of law school is an obstacle for many students. Throughout his tenure as dean, he has worked tirelessly and creatively to raise money for scholarships.

Current students may be surprised to hear that before 2010, the college graded on a numerical basis, on a scale of 55 – 100, with a mandatory average for first-year courses between 77.5 and 79.0. For years, students complained that the grading system was hard for employers to understand and that the average was low compared to that of other law schools. Converting the system to letter grades was not easy, but Steve was committed to carrying out the change for the benefit of our students.

“Steve’s vision for a thriving public law school in downtown Atlanta is his legacy. He’s not afraid to get into the trenches and work alongside staff and faculty to continually improve the college.” –Jessica Gabel Cino, associate dean for academic affairs and associate professor of law