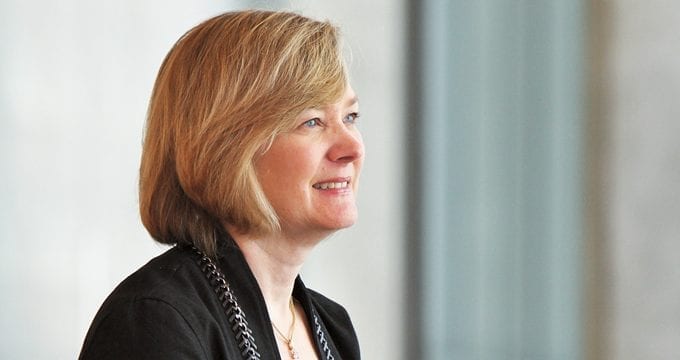 Several female colleagues were playing a game in which each selected a card she felt best described the “it” person. Every card chosen for Leslie E. Wolf, director of the Center for Law, Health & Society and professor of law, said, “The one we would most like to have her finger on the nuclear bomb.”

What makes a great leader? We asked several leaders in the Georgia State Law community to share their thoughts on others who exhibit leadership qualities worth modeling.

The card nailed it, said Wendy F. Hensel, incoming interim dean and professor of law. “Being an ethical and dedicated leader is central to who Leslie is,” Hensel said.

“She’s dependable, trustworthy and extraordinarily thoughtful about the implications and impact of what she does — especially on people who don’t have a voice in the issue — and the significance of the policy issues behind what she’s being asked to decide.”

Ethics research claims Wolf ’s passion. “You can’t be a lightweight and find ethics fascinating,” Hensel said, noting the complexity created by the intersection of written law and human behavior.

New degree programs, such as the new LL.M. with a concentration in health law, and the development of innovative delivery mechanisms are results of Wolf ’s pioneering leadership.

“She’s not afraid to go into uncharted waters and explore how we can maximize our impact,” Hensel said. Should things not work as expected, Wolf doesn’t see failure but is inspired to think creatively about more effective solutions.

She cares about the people who work with her and supports them in solving their challenges. Wolf mentors young faculty about career choices, reviews their scholarship and is instrumental in the promotion and tenure process.

Key to Wolf ’s success, believes Hensel, “is her ability to never lose sight of what is important to her and constantly being aware of the goal and how her actions move her toward that.

“That’s why the game was so hysterical. We were unanimous about Leslie’s leadership.”