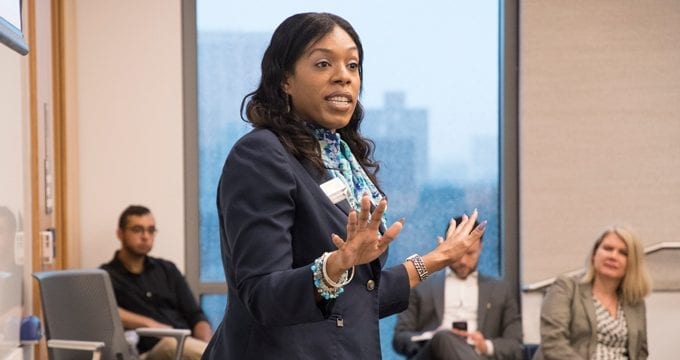 The criminal justice system is racist, and until that is addressed, we will continue to have a system that doesn’t work, said Marissa McCall Dodson, the public policy director for the Southern Center for Human Rights, during the Law Week 2017 keynote.

From 1970 to 2005, the U.S. prison population grew 700 percent, Dodson stated, and a disproportionate number of those inmates are black. One in three black men are under correctional control at some point in their lives, compared to one in 17 of white men.

“Unless there are people in this country that really believe African-Americans are inherently more criminal, that we must need to be policed more, we must be born this way—what else can account for this disparity?” Dodson asked. “Either you believe we set up a system that has bias against African-Americans and minorities, or [you believe] the system is working fine and reflecting the criminal behavior of our communities.”

“To have that kind of industry wiped out completely, and to suggest that now you have to figure out how to pay for the labor that was free before, put the South in crisis,” she said.

The 13th Amendment abolished slavery and involuntary servitude “except as the punishment for a crime” – which allowed a way to pull people back into the system for free labor, she said. “So, slavery is still OK, we just have to call them criminal.”

Dodson said low level offenses, such as having a dirty license plate, which is a misdemeanor in Georgia, the war on drugs and punitive sentencing are driving forces that continue to feed into mass incarceration, which also targets the poor.

“If you can’t pay the fine, you go under correctional control,” Dodson said. “[It’s] pulling poor black people into a system to benefit not only the industries that need workers but also the government. Chain gangs and convict leasing, those are big historical pieces of our past we need to deal with in a more meaningful way today than we have been.”

Private companies operating prisons—with contracts requiring the state have a certain number of occupants—are also contributing to the problem, she said.

“What incentive is there to reduce prison populations when you have the private sector coming in and saying in order for it to be worth our while there needs to be this many people in the system?”

The more recent move to incarcerating people in their own homes through ankle bracelets and other monitoring is not a solution, Dodson said.

“We need to stop thinking probation is the answer because it’s more cost-effective,” she said. “We need to be thinking about transforming the criminal justice system to start moving people out of correctional control and getting them into communities where they have opportunities to lead productive lives.”

Nationally, one in 31 are under some form of correctional control; in Georgia it’s one in 12.

So what can be done? Fully funding public defender systems, decriminalizing minor offenses, eliminating perverse incentives, comprehensive data protection (keeping track of things such as excessive use of force in policing), are key, Dodson said.

It’s been proven that being ‘tough on crime’ doesn’t work, she said. Instead, it’s important to establish trust with and invest in impacted communities, Dodson said.

Implicit bias training for law enforcement and other sectors of the criminal justice system, including lawyers, is also essential.

It’s time to deal with that implicit bias and realize the ways it shows up in the system, she said.

Improving access to voting and advocating for the right to vote is another action that can be taken. Six million Americans are not eligible to vote because of incarceration—13 percent of those are African-American men, Dodson said.

“Access to the polls is important,” she said. “If you are barred from voting, then opportunities you may have to affect your system, to exercise your voice, to not be marginalized in your community, all go away.”

Lawyers have an important role, Dodson said, in helping bring about these changes. She urges students to consider becoming public defenders or legal aid lawyers. If that’s not possible or an interest, take on pro bono work whenever you can, and advocate for the rights of others at the capitol, she said.

“Do not fall into thinking ‘things are just the way they are’ – hold yourself and the system accountable,” she said.