Law, Politics and the Courts in Difficult Times 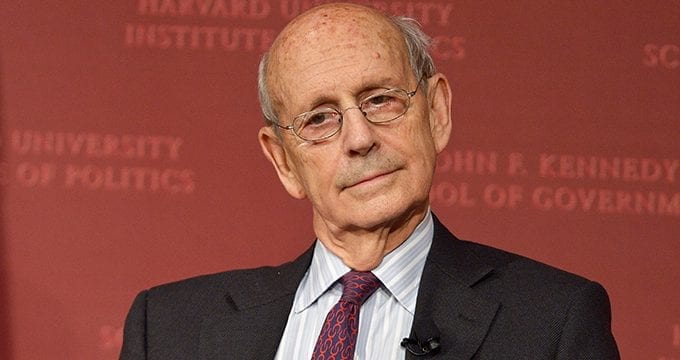 Justice Stephen Breyer emphasized that the justices go through each case “with an open mind” and that he wants to hear “both sides” and “then I want to know what my colleagues think and then I want to talk it over.”

Given President Trump’s recent (and not so recent) attacks on the federal judiciary, it is not surprising that Justice Stephen Breyer choose to speak out on Saturday (Feb. about the public’s mistaken notion that “we are actually politicians.” Breyer emphasized that the justices go through each case “with an open mind” and that he wants to hear “both sides” and “then I want to know what my colleagues think and then I want to talk it over.” The justices’ job “is not to be on side A or side B but to decide [the case] correctly under the law.”

We need an independent judiciary now more than ever. We also need an honest one. Justice Breyer may consider both sides of every case and hear what his colleagues have to say but after doing that he almost invariably votes with the other liberal justices. On questions of abortion, affirmative action, campaign finance reform, gun control, federalism, sovereign immunity, and voting rights, he has consistently sided with his liberal colleagues. There are a few exceptions to this obvious pattern such as his vote to strike down the Medicaid expansion of the ACA, and a number of criminal procedure cases, but Justice Breyer has been a reliably liberal justice over the course of his long career even though most of the high stakes political cases he has had to wrestle with involve vague constitutional language, contested history, and shaky (to say the least) precedents. And, of course, Justice Breyer is actually less predictable politically than any other justice on the Court with the exception of Justice Anthony Kennedy.

Do Supreme Court justices need to misleadingly describe how “open-minded” they are and the role that “law” as opposed to “politics” plays in their deliberations in order to serve as important checks on other state and federal officials mowing down our constitutional protections? We have never needed these judicial road blocks more than now but there is a strong argument that public statements like Justice Breyer made on Saturday don’t strengthen but actually weaken the credibility of the justices. Most of my informed non-lawyer friends shrug their shoulders when Trump calls the courts “political” but actually roll their eyes when the Justices pretend law rather than values drives their decisions.

A few years ago, I was discussing my book Supreme Myths: Why the Supreme Court is not a Court and its Justices are not Judges, with a nationally known constitutional law professor. He accepted my descriptive account that the justices don’t take prior law seriously enough to warrant calling them judges but argued forcefully that it is dangerous for “experts” like us to take that position publicly. I almost choked on my drink when he suggested that the American people might lose faith in the Court if they “truly understood” that politics and values not law drive most decisions in big cases.

I thought he was wrong then and I think he is wrong today (under much more trying circumstances for the Justices and for us). The American people understand that the reasons many constitutional cases are so difficult is that there is rarely clear text, obvious history, or prior case law to guide the decisions. Under these circumstances, it surprises no one that Justices Alito and Thomas reach conservative results most of the time while Justices Sonia Sotomayor and Elena Kagan almost always prefer liberal ones. Admitting this reality is barely a headline while denying it sounds silly, untrue and defensive.

On the radio last Friday night, I suggested that the Ninth Circuit’s legal opinion staying Trump’s executive order on immigration was probably technically wrong under the law (for reasons relating mostly to how much deference is owed to the president in national security matters and the state of the factual record before the judges) but nonetheless obviously correct all things considered. The hosts of the show, as well as their listeners and folks on Twitter, knew exactly what I meant. The underlying legal issues were difficult, but the right answer was fairly obvious given all that we know about the president’s true motivations, the way the order was rolled out, and the chaos affecting real people coupled with the strong convictions among many that the order did not make us any safer from terrorist attacks. Why deny that these other considerations played a major (as opposed to a minor) role in the judges’ decision when they so obviously did?

I am not suggesting that where the law is clear, judges should ignore it to achieve personal agendas. I am arguing that in most newsworthy cases the “law” leaves judges with significant discretion (that is why we have so many dissents). In such cases, judges should do their jobs with their eyes on the real world and by weighing actual facts and likely consequences, just as the Ninth Circuit did last week.

In his remarks on Saturday, Justice Breyer observed that the justices “are not nine geniuses” but they are “nine human beings who have been put in a position of trust.” Just so. And at this moment in history, we need these nine people, as well as lower court judges, to act with full awareness of the potential and actual harms we face from our current president. In these trying times, but also in all other times, the justices will earn the trust Breyer describes more by talking candidly about their all things considered decisions and the enormous discretion they have in hard cases instead of talking about how “the law made me do it.” The American people are just too smart to fall for that old line.

This article was originally published on Dorf on Law Blog. Read the original article.