Enlisting in the Navy was never Darryl Holloman’s dream. The military held no particular appeal for him; his experience with large bodies of water was limited to swimming pools. Yet there he sat on a June day, 1986, putting a Bic pen to page after page of the application, turning over the next four years of his life to the U.S. Navy. 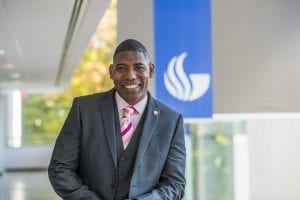 Holloman’s dream was to go to college and, as he figured, joining the military was the only way he was going to get there. An honors student in high school, he knew paying for college—even if he got a partial scholarship and worked full-time—was out of the question. His mother was a single-parent. Even with her steady job as an assistant director of housekeeping for a national hotel chain, she still had two other children at home and had little left over at the end of each month.

Financial aid? The federal financial aid process was inscrutable and, in the late 1980s, Frederick Douglass High School offered little in the way of resources to help Holloman navigate it.

Later that afternoon, the newly enlisted Petty Officer Third Class Darryl Holloman brought the recruiter home to answer his mother’s questions and reassure her that he’d made a good decision.

She listened, asked questions, thanked the recruiter and hugged her son. Then, with equal measures of pride and guilt, she told Darryl something he has carried since. “There’s no worse feeling as a parent than knowing that your child has done everything they can to go to college, but you can’t send them.”

To get to college, Darryl Holloman did what he needed to do.

After his four-year stint in the Navy, Holloman enrolled at Georgia State University. He intended to fulfill a few academic requirements and then transfer to the University of Georgia, but quickly changed those plans.

Holloman took the panther by the tail and—between classes, studying and a part-time job in the Office of the Dean of Students—he squeezed in several extracurricular activities including Phi Beta Sigma, Incept, the NAACP and the Black Student Alliance. He joined the Student Government Association, the literary magazine and Leadership Conclave. He was GSU’s 1994 Homecoming King. And for one semester, he played the mascot, Pounce, at basketball games. He fell in with a group of close friends and found life at Georgia State was everything he’d dreamed college might be.

April 26, 1994, was like many days for Holloman, by then a 25-year-old junior. He finished his last class of the day, treated himself to a burger basket in the Student Center and reported to work.

When he arrived, the office door had not yet closed before the administrative assistant greeted him.

“Darryl.” His name caught in her throat before she could finish the second syllable. “Come with me. I’m so sorry. It’s your brother.”

Twenty-three years later, Dr. Darryl Holloman, the Associate Vice President for Student Affairs and Dean of Students at Georgia State University, sees students every day who share and reinforce his own story: students from single-parent, working-class homes; students from underfunded, resource-poor high schools; students who are the first in their family to attend college; students who are doing whatever it takes to stay in school without financial help from their family.

For years, Holloman had turned over in his head ways he could honor his brother’s life. He kept returning to what his 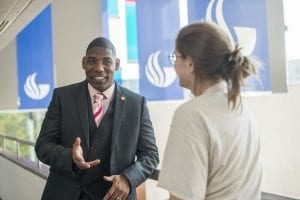 mother said to him that night in 1986 with the Navy recruiter.

In the summer of 2016, at a meeting with Georgia State development officer Karl Jennings to discuss potential funding sources for new scholarships, Holloman surprised himself. He asked what was required if he, personally, wanted to start a scholarship in his baby brother’s memory. Jennings explained his options, and he knew it was time to fulfill the dream he’d carried for more than two decades. 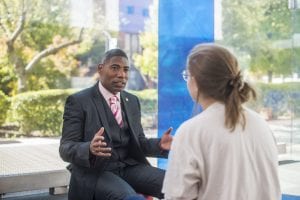 In truth, Holloman says he funded the scholarship to honor his entire family. He remembers his mother’s regret that she couldn’t pay for him to attend college. He remembers his sister Chandra’s dogged determination to kick-start her college education at the age of 40. He remembers his brother David’s struggles. Held back in kindergarten and a dropout in the 9th grade, David forever felt that his educators didn’t believe in him.

Dr. Darryl Holloman did what he needed to do.