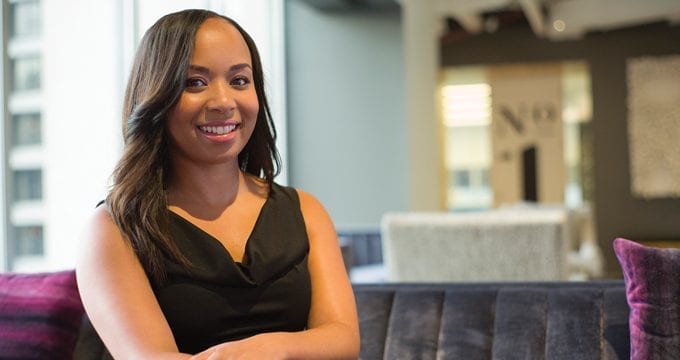 It’s a little bit of tax, a little bit of entertainment, and a lot of negotiation. I help productions gain tax incentives for film and television projects that spend money to produce content — they purchase hotel rooms, rent cars, pay for talent or laborers such as electricians, purchase wood to build sets, rent out venues, pay for writers, etc. All of those dollars that are spent in a jurisdiction, such as Georgia, I assist our production team receive a rebate and/or tax credit. Essentially, I help reduce the cost of production.

Another part of what I do that really excites me is the government relation aspect. These tax credits are based upon a state, local or international jurisdiction’s laws. I get the opportunity to interact with legislators at various levels, to follow legislation as it passes/fails and determine the impact it will have on our current and future production slate.

What’s the biggest misconception others have about your work?

That it’s boring—it’s not boring at all! I speak with the accountants and finance executives with various productions. I learn about productions in the developmental phase and help them hone in on the types of things they should think about for production. For example, an MTV series is considering filming in New Zealand, so I get to interact with the New Zealand Film Commissioner, read New Zealand code and regulations as it relates to film tax incentive for non-resident production companies and then help the production team better understand the types of expenditures that will qualify for this incentive. It’s never a dull moment around here.

On the entertainment side, I get to see some really fun things. When you see the Georgia peach logo at the end of a Viacom production, I helped that show receive a Georgia tax incentive. I’ve assisted productions such as VH1’s Love and Hip Hop Atlanta, BET’s Being Mary Jane and Paramount’s soon-to-be-released Baywatch. I get to know who is going to star in a TV show or movie, or where it will be filmed, before the general public. As a consumer and fan of our brand, that’s exciting to me. I also visit TV or film sets a couple of times a year and get to attend shows such as the BET Hip Hop Awards held annually in Atlanta. It’s a great work perk. And finally, my 6-year-old niece appreciates that I work at Nickelodean!

Why did you decide to go to law school?

Prior to law school, I was a tax accountant at Ernst & Young, focusing mainly on manufacturing. One of my largest clients was the Coca-Cola Co. I noticed that the partners who mentored me were attorneys, and they were also generally the more charismatic and more measured individuals. When I looked at my career to determine where I wanted to go and what I wanted to do, I knew I wanted to be like them.

What led you to working as a tax attorney in the entertainment field?

When I enrolled at Georgia State Law, I wanted to explore other areas of the law. But the fact remained, I was good at tax; and my interest in tax was renewed when I took tax classes with Professor Ronald Blasi and business-related classes with William Gregory, professor of law emeritus. I realized you have to stick with what you are good at, and my love for this area of the law blossomed.

Becoming a tax attorney in the entertainment industry was a matter of being in the right place at the right time. In 2010, I started working with Bennett Thrasher. They focused on entertainment primarily because of the influx of production due to Georgia’s state film tax credit, which was revamped in 2009. The amount of production in Georgia skyrocketed, and now it is the third highest state with number of TV and film sets.

Many of my clients at Bennett Thrasher were large MPAA members—Viacom/Paramount, Warner Bros, NBC Universal, Disney, Fox, and Sony. I also worked for large independent production houses such as AMC (The Walking Dead) and Atlanta’s own Tyler Perry Studios.

I studied hard to learn the ins and outs of my clients and their industry. I did my homework. I listened to clients and researched their projects. I knew challenges that the industry faced, not just tax from a tax perspective, but in general.

I had such great relationships with my clients, especially my contact at Viacom. So when a position opened up in January 2016, it was mine.

What skills are most important in your job?

Listening and negotiation. Listening skills are completely undervalued, but it’s something I use every day. When you listen, you know the correct questions to ask, you get information you need and even paying attention to the tone of a person’s response will help you to know if you are going to have an uphill battle.

If I could advise any law student what to hone in on, I would tell them to actively listen.

What other advice would you give to students interested in a similar career?

You have to know the industry and the industry players. That is the one thing that has helped me most. It was partially being in the right place at the right time, but it was also preparing and knowing I had to learn about my clients and learn what they needed outside of the service I was providing.

For law students interested in getting into any position, it’s important to know your internal clients and your external clients. Make sure that you are addressing their concerns and know the audience you are speaking to so you can be effective.

What accomplishment are you most proud of?

In my career, I was honored to be named one of the 40 Rising Stars in 2015 by the Daily Report. I was very thankful to be in the room with other honorees and one of my mentors, Justice Melton, who received the Luminary Award that year. It was a very full circle type of moment.

But truly what I am most proud of is the relationship I have with my 6-year-old niece Trinity, who lived with me part time in Atlanta. She is excited that I work for Nickelodeon (which is owned by Viacom) … so having  an impressionable young woman, who is proud of me because I work for a company that is well known and well respected…that is my biggest accomplishment.

What class or experience at Georgia State Law helped the most in preparing for what you do now?

I learned a lot from Professor Roy Sobelson, even though I don’t use evidence in what I’m doing. He instilled in me the importance of being a people person and knowing your audience. I give a lot of presentations and talk to a lot of different executives. The same level of detail that I use when working with a production accountant may not be necessary for my direct-report. Knowing what information is pertinent has allowed me to grab and keep the person’s attention. It’s invaluable in my day-to-day operations.

Professors Knowles and Gregory instilled importance of knowing the corporation and the business side of things, to look behind the corporate veil. Professor Knowles was able to very effectively draw your attention to current happenings in business and show how case law shapes that and how it relates. Both professors helped me to understand the importance of reading the trades and making sure I am up-to-date on what’s going on in the business world, because something one of my competitors did two weeks ago may affect me this week.

Going to Georgia State Law was one of the best decisions I ever made! The College of Law and relationships I built with professors really helped shape the professional I am today. It taught a lot of get up and go, it taught the importance of being diligent, and I couldn’t imagine having gone anywhere else.