The CLS is a highly competitive program of the U.S. Department of State, Bureau of Educational and Cultural Affairs aimed at offering intensive overseas study in critical need languages. More than 5,700 applications were received this year for 550 national awards.

Alcalá, a junior majoring in International Studies, will spend two and a half months studying Arabic and participating in cultural immersion activities designed to give him an understanding of Arab language, history and culture. This will be Alcalá’s fourth time studying abroad. He previously completed three Georgia State study abroad experiences in Trinidad & Tobago, the Dominican Republic and Costa Rica. 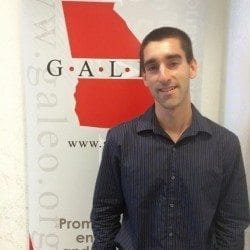 His interest in Arabic began through friends in grade school.

“In these pivotal years of my development,” Alcalá said, “my new friends taught me about Islam, religious traditions such as Ramadan and the regions of the world where their families are from. During that period of much misconception about Arab people and culture, they kept my young mind open to learning and closed to the stereotypes.

“As I grew older, I became extremely fascinated by Arabic. The script, the sounds and the fact that it unites hundreds of millions of people gave me the urge to pursue learning it. From communicating in Arabic to teammates during soccer matches, to having friends teach me the script, I was very proactive in using the resources available to further my knowledge of Arabic. And then, once I got to Georgia State, I was able to finally take formal Arabic classes.”

“In these critical times, Andy Alcalá has the opportunity to be at the forefront of building understanding and trust between the United States and Arab countries,” said Larry Berman, dean of the Honors College. “We are extremely proud of Andy for receiving a Critical Language Scholarship.”

For his application to the program, he consulted with a number of faculty and staff at Georgia State University, including Anthony Byrd, Honors College coordinator of national scholarship and fellowship and Georgia State’s Critical Language Scholarship campus adviser.

“The Honors College and the entire Georgia State community are very proud of Andy’s accomplishment. He is only the second undergraduate student in GSU’s history to receive the award, and the first in several years,” Byrd said. “As a former CLS scholar, I know that this will be a wonderful experience for Andy. His language and intercultural communication skills will improve, and he’ll return a different person. It really is an amazing achievement.”

“I’m very grateful for receiving this prestigious scholarship and having the opportunity to immerse myself in Jordanian culture,” said Alcalá, “I would not have been able to do it without the support of the Honors College and the advice I received from Anthony [Byrd].”

A native of Alpharetta, Ga., Alcalá did not plan on attending college until his senior year of high school when his outlook changed.

“I started thinking about the future and realized that furthering my education was going to be key to my success,” he said. “I was working full-time at McDonald’s and did not think I would be able to afford college. When I got the phone call that I received the Goizeuta Scholarship, all of that changed.”

The Goizueta Scholarship is designed to increase the number of students of Hispanic/Latino origin who enroll and complete their undergraduate degrees at Georgia State and provide mentors, internships and community service experiences to these students so they can become future leaders.

Alcalá has interned with the Georgia Association of Latino Elected Officials and is immersed in community service around greater Atlanta. He currently serves as the vice president of Global Peace Youth, a homeless advocacy organization, and volunteers with several local organizations, including Safehouse Outreach and the Latino Leadership Initiative. After graduation Alcalá plans to join the Marine Corps and work toward becoming a foreign service officer.

“Through volunteering and completing an internship at a nonprofit dedicated to helping the Latino community in Georgia,” said Alcalá said, “I have realized that my passion is to aid marginalized communities. I have been an advocate for the homeless in Atlanta, undocumented immigrants being held in detention centers and at-risk teenagers in high school.

“I plan on volunteering with refugee resettlement services next semester. With the influx of refugees from Syria and other Middle Eastern countries, the experience I gain through the CLS and my knowledge of Arabic and Arab culture will be an essential aspect of my effectiveness and an immeasurable comfort to these people who have lost everything.”