Two weeks after he took the California bar exam, Justin Uhd flew from Los Angeles to Atlanta to begin pursuing his lifelong dream of humanitarian service.

Uhd came to Georgia State University in the fall of 2012 to participate in its Peace Corps Master’s International Program. After completing a year of coursework for his master of public administration degree, Uhd embarked on a 27-month commitment in the Philippines.

He was sent to Llorente, a municipality divided into 33 barangays, or districts, in the province of Eastern Samar, which lies in the Eastern Visayas region. Llorente has a population of 19,101, and Uhd spent most of his time in one of the barangays, poblacion 11.

Uhd served as a youth development facilitator in the children, youth and families sector of the Peace Corps. He worked on behalf of the Department of Social Welfare and Development in the Philippines to train beneficiaries – primarily mothers, children and youth – on maternal and child health topics, traveling throughout each of the 33 barangays to conduct educational training sessions.

In spite of the language barrier and the culture shock he experienced, Uhd felt the training was going well. However, he was not prepared for the island nation’s western Pacific weather.

“It was all very surreal. At first I took it lightly. I had never heard of a super typhoon and just thought it would run its course, but the news kept showing a direct path towards where I was living,” Uhd says.

The Peace Corps evacuated Uhd and 12 other volunteers in the path of the storm to Tacloban, the regional center and most populous city of Eastern Visayas. 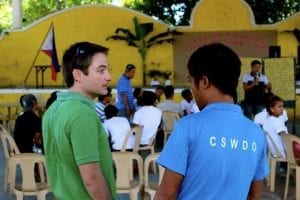 On the night of November 8, 2013, the deadliest typhoon on record in the Philippines, Typhoon Haiyan, made landfall. According to data from USAID, 16 million people were affected, 4.1 million were displaced, 1.1 million homes were damaged or destroyed and 6,201 people died.

“We were consolidated and sent to Tacloban for safety, but that city was hit hardest by the typhoon. I heard the wind howling, watched houses fly apart and saw six feet of water rushing down the street like a river. People were crying for their missing loved ones.

“I started thinking about the families I work with, many living in houses basically made out of aluminum on the water. I didn’t know if they were alive. In that moment, it really hit me what a true disaster was,” Uhd says.

Once the storm passed, Uhd immediately began to search for ways to help.

“I told one of the people I was with during the storm, ‘we’re able bodied, and we need to do something.’” They helped the Philippine military clear the roads so disaster relief trucks could drive into the city. “We were wading through water waist-deep with cars floating down the street,” he says.

Widespread panic and danger followed the initial destruction. When looting and violence overtook Tacloban, Uhd says there was a real fear Americans and other foreigners in the area would be targeted. So a few days after the typhoon hit, the Peace Corps volunteers travelled from Tacloban to Manila for safety.

In Manila, Uhd was nearly moved to tears when he saw a U.S. army major making observations and gathering information so the U.S. could identify the resources needed for the people of the Philippines.

“When I saw the stars and stripes on his uniform, I almost lost it. The relief of knowing someone from home was there to help was overwhelming,” he says.

Shortly after arriving in Manila, Uhd received a special invitation from the U.S. Embassy to return to the airport in Tacloban for a day. They needed help locating foreign travelers and connecting them with their embassies. “It was all about protecting people,” he says.

While working with the embassy in Tacloban, Uhd began to understand the magnitude of the typhoon. He was unsure of the devastation to his assigned location until he saw a fellow American at the airport.

“I met Anderson Cooper while he was reporting on the destruction of Typhoon Haiyan. He was the first person to tell me about how badly Eastern Samar had been hit.”

Uhd returned to Manila, unsure of what his future with the Peace Corps would hold. After two weeks in Manila, the Peace Corps gave the volunteers seeking refuge an opportunity to accept interrupted service. “The Peace Corps basically told us, ‘we aren’t kicking you out, but we can’t have you staying in Manila for the next two months.’”

Volunteers were given several options. Uhd chose to fly back to the U.S. and spend the holidays with his family. He returned to the Philippines as soon as he could.

“I had the chance to leave, but I saw this as an opportunity to do the most good. We needed to be there. This was the time to help people in need. There were two of us who didn’t want to leave at all, but we had to get out of Manila.

“The typhoon was a really damaging, traumatic experience for a lot of the volunteers. Four or five of the 12 of us who were evacuated to Tacloban did not return,” Uhd says.

Uhd returned to poblacion 11 in Llorente to continue his service.

“By and large, our area was not affected as badly as others. In a town 25 minutes away from me, 150 people died. Entire barangays surrounding us were washed out. It was truly a blessing that I got to go back,” he says.

Upon returning, Uhd continued his work as a youth development facilitator. He also reached out to barangay leaders in Llorente to collaborate and create a partnership for projects in the community.

“The experience of finding people who were excited to work with me was really enriching. It made me feel like there was a reason I was there.”

Uhd worked with the barangay leaders in Llorente to obtain funding for a project to train fisherman, something they wanted to see happen. Fishing and agriculture are the primary economic drivers in Eastern Samar. Because he did not have any knowledge in that industry, he contacted his friend, a fellow Peace Corps volunteer serving in the coastal resource management sector, for some advice.

“We had become good friends during our early training, and he was in Tacloban with me during the evacuation. He was serving nine hours away from where I was, on a different island, but I was able to text him and gather information on ways to help meet their needs,” he says.

Uhd saw success not only in the project, but also through the community’s acceptance of him.

“Instead of being elitist and thinking I know the best way of doing things, I told the leaders, ‘I’m here to work with you. Tell me what you need.’ When I found passionate people who were excited to work with me collaboratively, it was a game changer.”

Uhd says the Peace Corps was a life-changing experience.

“The Peace Corps really opened my eyes to poverty. I worked with people who don’t have enough food and don’t even have basic healthcare. It made me realize how more people should be giving back to help those who are less fortunate.”

Uhd also says this experience opened his eyes to the power of working with youth.

“The support and love you can give youth can change their lives. Simply believing in them was not something they experienced. I had the direct opportunity to help others,” he says.

After finishing his M.P.A. degree at Georgia State, Uhd says he plans to work in international service.

“They call the Peace Corps the toughest job you’ll ever love, and it’s true. I really miss the Philippines and working with the people there. And even through the typhoon and all of the difficulties of the experience, it was worth every single minute. I wouldn’t change a thing.”