In August, 500 of the African continent’s most promising young professionals convened in the nation’s capital to be saluted by President Barack Obama. Those being recognized were participants in the president’s Mandela Washington Fellowship for Young African Leaders Initiative (MWF-YALI).

In his address, President Obama acknowledged the work of Kadija Diallo, a fellow from Guinea. She was one of 25 who had just spent six weeks as a fellow at Georgia State University. At home now, she works in communication and information management for UNICEF. “She wants to work on improving the lives of women and girls back home in Guinea. So we are proud to be your partner,” he said to her.

“I want to make sure that even as we’re working with governments, we’re also helping to empower young Africans like all of you,” the President continued. “That’s why I launched YALI, to help you access the resources and the training and the networks that you need to become the next generation of leaders in all areas—in civil society, in business, in government.”

The initiative invests in these young people through academic coursework, leadership training and networking. Its goal is to foster a network of young leaders across the African continent.

“I see a lot of good coming to these countries,” said Sally Wallace, associate dean and YALI program director. “It’s cool to see the U.S. government play a role, but it’s really the work of the fellows that is making the difference.”

Georgia State hosted the fellows through the International Center for Public Policy (ICEPP) in the Andrew Young School of Policy Studies. The school was designated one of six Public Management Institutes to participate in hosting fellows.

Each host institution was responsible for developing a curriculum focusing on leadership and management skills over the six-week program. Other host university program tracks included Business and Entrepreneurship and Civic Leadership.

“The public management track is different than the others,” said Shereen Bhan, assistant director of ICEPP and YALI program manager. “We geared the program towards future leaders in the public and nonprofit sectors and showed them how government, at different levels, impacts policy.”

Activities focused around a different theme every week and covered areas in which the school has expertise: public finance, public administration, public expenditures on education and health, criminal justice and civic engagement amongst other topics. Participants participated in lectures from faculty, government and nonprofit leaders, site visits to various Atlanta landmarks and organizations, and weekly volunteer activities.

Weekly dinners broke the fellows into smaller, more intimate groups. They were hosted by community leaders as well as AYSPS faculty and board members.

“The lectures were incredible,” wrote fellow Tracy-Lee Jooste in her program evaluation. Jooste is the director of policy and research in the Western Cape Department of Human Settlements in South Africa. “The weekly programs were very well-designed with clear linkages between the themes, and the lecturers themselves did a great job of engaging with us on relevant topics. I really enjoyed the classroom interaction. I learned a lot, and much of this can be applied to my work.”

“The course content is well-balanced with appropriate site visits, which is proving invaluable in marrying the learning from the workshops with practice in the various public management offices we visit,” wrote fellow Jonathan Maphosa, deputy general counsel of the South African Reserve Bank. 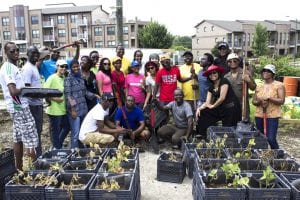 “All of Atlanta got involved,” Bhan said. “The city went out of its way. The mayor’s office and different organizations really rallied behind this program. We had a lot of positive feedback from participants.”

Georgia State played an important role in bringing its cohort of young African leaders together.

“Our group was particularly cohesive,” said Bhan. “There was camaraderie that was unparalleled. I think it’s because the fellows felt welcome at Georgia State University and in Atlanta. We’ve become very close as a group.”

Wallace agreed. “The fellows here were very diverse in their backgrounds and very focused on all facets of policy. They’re smart, opinionated and eager to learn from faculty and each other. And they really came together to support each other.”

“We all really enjoyed our experience with the Mandela Washington Fellows this summer,” said Dean Mary Beth Walker. “Everyone was impressed with the spirit and energy that the fellows brought to their work with us. Community leaders at several of the site visits also commented on how impressive the group was.”

Next year, the U.S. Department of State will double the number of Mandela Washington fellows hosted in nationwide and implement a pilot track on energy. Future plans also include sending 80 young leaders from the U.S. to Africa, to be hosted by alumni of the fellowship program.

The Andrew Young School has already been invited to host fellows a second year, during the 2016 summer program.

“A devoted team is running the program at Georgia State with heart and passion, and we are so grateful,” said fellow Comlan Ounsougan Ameyou, a chief compliance auditor in the Togo Revenue Authority. “We truly appreciate the Georgia State family because, indeed, we feel like we are in a family.”

Learn more about the 2015 GSU-Young African Leadership Institute at https://icepp.gsu.edu/yali/.