THE WORLD IS INCREASINGLY FILLED WITH DISCARDED PLASTIC, AND RECYCLING ALONE WON’T CUT IT. AT GEORGIA STATE, BIOLOGY PROFESSOR ERIC GILBERT IS USING TINY MICROBES TO MAKE A BIG DENT IN OUR PLASTIC PROBLEM.

Halfway between Hawaii and California in the north Pacific Ocean sits the Great Pacific Garbage Patch, the world’s largest buildup of plastic. This floating mass, made up of an estimated 1.8 trillion pieces of plastic, will never disappear. Instead, aided by wind and sea currents, it will degrade into minute shards of microplastics, endangering even the smallest organisms and damaging entire ecosystems. It’s just one of six giant garbage patches swirling around in our seas.

Since 1950, when plastics became ubiquitous, humans have generated 8.3 billion metric tons of the stuff, and the vast majority of plastic waste ends up in landfills, oceans and other natural environments.

So far, recycling is the best available method to stop the world from accumulating more and more plastic trash, but even that doesn’t get us far. That’s because traditional recycling uses chemical or mechanical processes to break down products and reformulate them into a cheaper, less structurally sound plastic. (Like taking a polyethylene laundry basket and using it to make grocery bags.) These degraded products can’t be recycled infinitely, and eventually end up in the waste stream, making the process — known as “downcycling” — ultimately unsustainable.

Georgia State biologist Eric Gilbert is working on a way to change the game using “upcycling,” which transforms discarded materials into more valuable products. He’s doing it by thinking small — using tiny microorganisms, each thinner than a human hair, to gobble up the waste and turn it into a commercially viable substance. 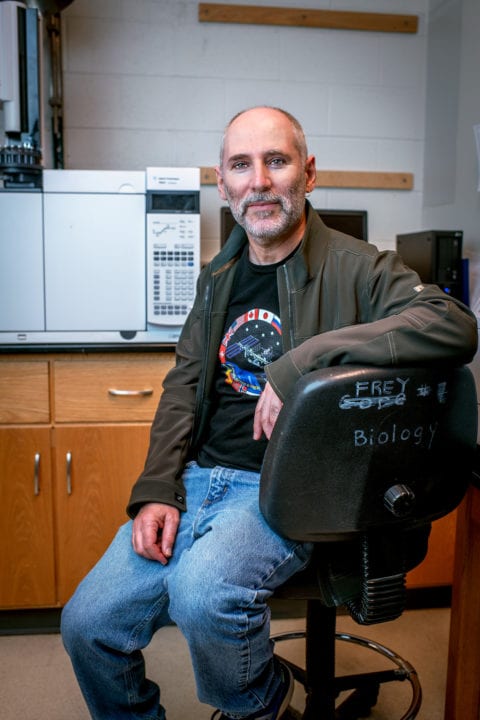 Gilbert grew up in California in the 1960s, back when plastics were starting to work their way into every conceivable consumer product. He used to gaze out his bedroom window from his parents’ house high on the western slope of Berkeley Hills, watching the sun set — first over the Campanile bell tower at the University of California-Berkeley campus, then over the Golden Gate Bridge and the San Francisco Bay, and finally over mile after mile of ancient redwoods cloaked in coastal fog on the mountains of Marin County, a place where conservationist John Muir once tramped. With what Gilbert calls “big views,” his fascination with the natural world began.

The world is a beautiful place, he’d think. We need to take care of it.

He became an avid hiker and backpacker, and studied biology at the University of California-Santa Cruz. He chose the major after James Watt, President Ronald Reagan’s Secretary of the Interior, announced he planned to allow development of natural resources on public lands.

“I thought, I enjoy nature and yet I really don’t know anything about it,” he said. “But this is clearly something that needs our protection.”

In spring 1990, after graduating with a biology degree, Gilbert read an article in Discover magazine called “The Poison Eaters.” It was about the burgeoning field of bioremediation, a branch of biotechnology that uses living organisms to address water and soil pollution. The article included a description of the work of William T. Frankenberger, a now-retired University of California-Riverside professor, who was using microorganisms to clean up selenium pollution in oil spills.

“I had never heard of it, but I immediately knew it was what I wanted to do,” Gilbert said.

Five months later, he joined Frankenberger’s lab as a Ph.D. student. Ever since, he’s been searching for ways to protect the natural world with microorganisms.

Today, in his lab in the Natural Science Center at Georgia State’s downtown campus, Gilbert and his colleagues are using chemical processes to degrade plastic into its base components, and then feeding those components to yeast microbes that — over the course of about five days — transform the plastics into fatty acids. The digestion happens in beakers full of a soupy mix of plastic that’s been heated to 400 degrees Fahrenheit.

After ingesting the plastic, the yeast microbes become filled with palmitic and oleic acids: two fatty acids that are found in commercial products like shampoos, lubricants, biofuels and detergents. The team harvests these acids by breaking apart the microbes with tools in the lab. (Another environmental advantage of this work: extracting palmitic oil from microbes could eliminate the need for companies to deforest palm plantations.)

So far, they’ve had what scientists call “bench level” success; that is, success in the lab. The next step: scaling up the process.

“We’re currently working at the one-liter scale. We have our eyes set on moving two steps down the road, to 100 liters,” Gilbert said. (Engineers like to scale up in 10-fold steps, so from one to 10 to 100.) “As the size increases, new challenges sometimes show up. It’s a lot more challenging to create 1,000 liters of solution than 10 liters.”

Eventually, the volume needs to be large enough to make the process commercially viable.

“We need the yield of product to be sufficient so the whole thing becomes profitable at the end of the day,” said Gilbert, a slim 55-year-old whose voice still carries the casual cadence of his California childhood. Improving the process is key to taking their work out of the lab and into industry, where companies can use this technology to divert plastic from landfills.

Bioconversion, turning organic matter into usable products, is not new. Think about our ancestors fermenting food — honey into mead or grapes into wine. Or consider the “Impossible Burger,” the veggie burger with a meat-like taste that comes from a soy-derived heme molecule that’s produced when yeast is fed sugar.

What makes Gilbert’s work notable is its potential to upcycle food-contaminated plastics. Right now, recycling facilities toss any plastic with food on it — take-out containers with smears of ketchup, peanut butter jars that haven’t been washed out. Recyclers generally want to break down postconsumer plastics into the smallest chemical units (called monomers) that they are made of.

“If there is food residue in the mix, it’s challenging to get monomers that are clean enough that they can be used to make new plastic,” Gilbert said. “We think that the microbes won’t mind food particles. They’ll be able to eat them along with the plastic.”

They’ll also digest a soup made from poor quality, degraded plastics or microplastic fragments, which are hard to recycle.

Gilbert and his colleague Bryan Stubblefield, then a Ph.D. student in Gilbert’s lab, got the idea for the project a decade ago, after Gilbert brought up the Great Pacific Garbage Patch. He’d become intrigued by the problem during what he describes as a “research midlife crisis.”

“I remember thinking, This seems like a really hard thing to solve,” he said. “But if not now, when? I wanted to do something that would have some actual impact.

“We knew that plastics are natural products at some level; they’re made from petroleum hydrocarbon,” he said. “As bioremediation people, we work with microorganisms that break down petroleum hydrocarbons, so we started to think about how we could create a new approach to the problem.”

They began by thinking local. Gilbert and Stubblefield learned that most of the world’s carpets are manufactured at plants centered around Dalton, Ga., a 90-mile drive north of the lab on I-75. And most carpets are made of plastic. Every year, the plants produce billions of pounds of carpet, and three billion pounds of used plastic carpet ends up in landfills.

Bob Peoples is executive director of Dalton-based Carpet America Recovery Effort, a nonprofit that advances “market-based solutions that increase landfill diversion and recycling of post-consumer carpet.” He has been advising Gilbert on his research and providing carpet samples for years.

“We have to be able to produce a recyclable product that is equivalent to virgin materials,” Peoples says. “Dr. Gilbert’s technology offers a potential path to do just that.”

According to Peoples, over the past decade the percentage of nylon in carpets has dropped dramatically, and carpets made in the U.S. today also contain very little wool and virtually no cotton. Instead, almost half of all new carpets are made from polyethylene terephthalate (PET), commonly known as polyester.

Of the estimated 6.3 billion tons of
plastic waste that has been
generated since 1950…

77%, about 4.9 billion tons of plastic,
accumulated in landfills and marine
and soil ecosystems.

As far back as 1965, researchers theorized it was possible to use microbes to convert nylon into fatty acids. Gilbert and Stubblefield started out testing their process on nylon and later began testing on PET, too.

At first, they thought they could coax microbes to eat plastic polymers by “loosening the ends” with a bit of chemical treatment. The idea was that then the microbes would be able to continue ingesting the fibers, “as if they were eating from the end of a ball of yarn,” Gilbert said.

It turned out that they would only eat the little bit that was “loose.”

“Eventually we moved to a more thorough treatment that yielded a ‘soup’ of small molecules that the microbes could eat,” Gilbert said.

Over time, the yield — the amount of valuable fatty acid produced by the microbes — has improved, going from just a few milligrams per liter to nearly three grams per liter, about a 500-fold increase.

Still, there are more milestones to achieve before the product is commercially viable, including increasing the product yield by another two to three times, at least. They hope to have meet this benchmark within three to five years.

Gilbert received a $25,000 grant in 2016 from the Georgia Research Alliance (GRA), a nonprofit that coordinates research between the public and private sectors. Since then, the GRA has invested an additional $100,000 in the research. In 2019, the U.S. Department of Energy awarded a $205,877 Small Business Innovation Research grant to Southeastern Biochemicals, Inc., a company led by Georgia State alum Alan Overcash and based in Gainesville, Ga., to work with Gilbert’s lab on upcycling plastics using yeast microbes. The start-up’s mission is to build a biochemical refinery to convert plastic waste and crops, including sweet potatoes and sugarbeets, into renewable chemicals and energy. Gilbert’s work represents yet another environmentally sustainable business opportunity.

The grant enabled the company to hire Stubblefield, who had stayed on as a postdoctoral researcher in Gilbert’s lab, full-time. Together with doctoral student Merhawi Mihreteab, the research and industry team is hopeful their innovative work, which has a patent pending, can be part of a solution to the plastics crisis.

“We all need to step up and do what we can,” Gilbert said. “In a larger social sense, university scientists are here to tackle problems that seem intractable. As we learn more, problems that may have once seemed impossible begin to have hints of a solution.”