In his new book, Urban Studies Professor Dan Immergluck shines a light on the forces that are reshaping the metro area, including politics, race and the need for more affordable housing.

As the Atlanta BeltLine continues to transform metro Atlanta, it’s a fitting time to look back at the forces that shaped the region—racial, political and financial—and look ahead to possibilities that could make the city more livable for all residents.

Last month, Money magazine named Atlanta the best place to live in the U.S., but like in many cities, some of the lower-earning Atlantans are being left out of the greatest opportunities.

Dan Immergluck is an expert on all things Atlanta. As a professor in the Urban Studies Institute, his research focuses on housing markets, neighborhood change, urban poverty and racial dynamics, as well as development practice and policy.

In his newly released book, his fifth, Red Hot City: Housing, Race, and Exclusion in Twenty-First-Century Atlanta, Immergluck takes a deep dive into the forces changing metro Atlanta’s past, present and future. He says the book is a result of living in and researching Atlanta for nearly two decades—during times of great change—which has led to some disappointments in what he considers missed opportunities.

“I like to say that writing this book represents 17 years of catharsis,” Immergluck said. “It’s the result of some pent-up frustration after seeing these decisions made over and over again that could have been made differently.”

Here he shares his expertise on what he views as Atlanta’s opportunities for greatness, and the forces that led us here.

What is significant about the changes in the metro suburbs over the past several decades?

The book’s focus is really on the 30 years from 1990 to 2020, a time during which there have been many changes. The suburbs have become more diverse overall, both racially and economically. About 80 percent of the growth in the metro population since 2000 has been Black, Latinx and Asian households. At the same time, more affluent suburbs, especially in the favored, northern arc of the metro, have attempted to push back against such diversity. They have seceded from their counties to gain stronger control of zoning and police powers and have subsidized large redevelopment projects that have often resulted in the loss of older, low-cost rental housing, resulting in the displacement of thousands of lower-income families.

You call the Atlanta BeltLine one of the most transformative projects in the country. How so?

The BeltLine has had a huge impact on the city of Atlanta, and especially to neighborhoods within a mile of it—which covers a lot of the city—on its demographics, and on rents and home values. It concentrated growing demand in the city into areas near its trails and proposed trails, and, as early as the 2000s, increased speculation by developers and speculators, have been driving up land values. This has resulted in displaced renters and made much of the city unaffordable to lower-income families.

What needs to happen to make a dent in the problem. What are leaders doing or not doing to bring about a more equitable Atlanta?

Lots of different things should happen. The city needs to invest tens of millions of dollars per year in affordable housing. This needs to come from fixing the under-taxation of commercial real estate in Fulton County. But other things need to happen both in the city and in the suburbs. Redevelopment projects should not be targeted at areas with lots of affordable housing. If families are displaced, they need to be compensated and helped to find new, affordable housing. State government needs to allow local governments to regulate housing markets, including adopting fair housing laws, and rent stabilization. Tenant protections—Georgia’s are among the weakest in the country—need to be strengthened.

What types of affordable housing exist along the BeltLine, and/or in metro Atlanta right now, and is it enough?

There is not nearly enough affordable housing near the BeltLine or in the city overall. Many of the efforts to develop affordable housing have really targeted lower-middle-income households and not those most in need of affordable housing—those earning under about $40,000 for a family of four. The book goes into more detail on the impact of the BeltLine on home values, but I have been doing this work for about 15 years, so it’s not much of a surprise to me, I’m afraid. 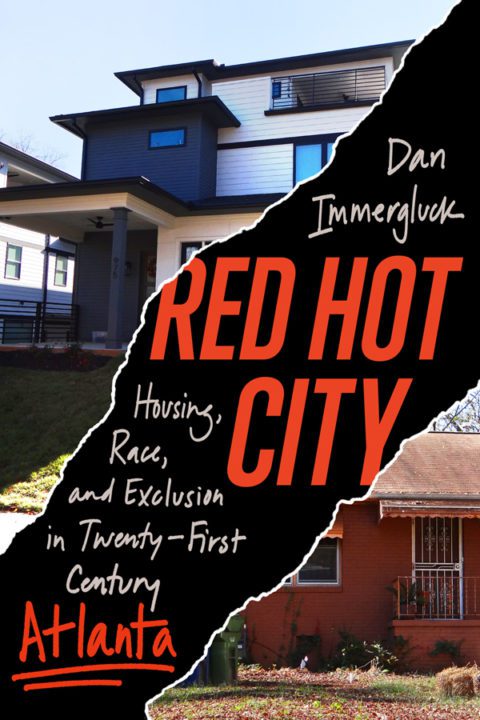 In the book, you say city leaders have missed opportunities to develop plans that would be more inclusive. How so?

It goes back to the dominance of corporate interests in the development of the city going back to the early 20th century and the dominance of always looking to interests of landowners, developers and landlords over the interests of lower-income households. And that plays out in terms of policy decisions. There’s generally been a disregard for the interests of lower-income families, even when there have been Black mayors in the city. Atlanta has a famous history of local government being a “Black-white” urban regime, in which Blacks have held titular political power, but the real power behind the throne is corporate power, especially large firms like Delta or Coca-Cola, as well as real estate developers. With some exception during the early part of the first Maynard Jackson administration, the corporate-led, Black-white regime has remained strong. So, until that changes, it will not be easy to make major changes. The other thing I talk about in the book is the constraint of the Georgia legislature and how stifling that can be in terms of local governments trying to enact more progressive policies.

There are lots of things that local governments do in other states that Georgia localities are not allowed to do—things like having their own fair housing laws, enacting rent stabilization or requiring landlords to accept housing vouchers. Those things are all prevented by Georgia state laws.

To what degree do you think Atlanta’s housing trajectory is race-related?

With the declines in home ownership in the region since the foreclosure crisis, we’ve seen a huge transfer of land wealth and housing wealth away from working-class families especially— which are disproportionately non-white—to real estate investors, including some very large real estate investors. That’s very racialized because if they’re small investors, they tend to be white, and if they are large corporate investors, the stock is largely held by white households.

You mention gentrification. Are these changes always negative or can there ever be some positive impacts?

It’s a challenging word because people have different definitions for it. The way it is usually defined and actually operates, I would say it’s not a good thing because it usually displaces people and makes an area turn into an increasingly exclusive island of affluence. We need to consider what happens to people in the short run in terms of displacement, but also what do we want a place to look like 10 or 20 years from now. Do we want the whole city of Atlanta to be only for wealthy people? I don’t think that’s desirable or sustainable.

I would distinguish gentrification from a kind of “responsible reinvestment” or “development without displacement.” These are alternatives where development benefits more than just affluent people, and where there are deliberate, large-scale efforts to provide and preserve housing that is affordable to low-income families. But I don’t think that is what gentrification means to most people.

We’re seeing an affordability crisis in Metro Atlanta right now. This is something that’s likely playing out in cities across the U.S. Are there lessons to be learned here?

There are lots of lessons in in the book, particularly for growing cities, cities experiencing job growth and population growth, and especially cities that are in the earlier stages of gentrification and cities that are planning big, transformative projects on the scale of the BeltLine. That’s what I call a kind of” affordability-first” model to plan for—things like assembling vacant land to set up programs to provide affordability and trying to minimize property tax increases for low-income residents. Those moves will reduce the shock that sudden increases in housing values and land values will cause.

Another lesson is to make sure that the tax structure of the city captures a significant amount of the increased land values generated during growth and gentrification trends. One big problem in Atlanta is that property values have gone up a lot, but the tax revenue has not kept up with that, particularly for commercial development. Commercial properties in Fulton County and Atlanta are severely under taxed, especially the big ones, and so the benefits to the public of gentrification are muted because they’re not capturing some of that land value. By capturing such value, cities can provide more affordable housing because they’ll have more funds. So the irony in Atlanta is that, over the last 10 years especially, there’s been so much increase in land values, yet the city continues to suffer from a sort of self-imposed austerity.

What would you consider a best-case scenario for the future of Atlanta to be used as a model for other cities?

That’s an excellent question. The city needs to fix this property tax dysfunction, and then that could raise as much as $100 million a year for the city itself. If about half of that went to affordable housing, it could provide for much more inclusion.

New developments should be creating a more welcoming city to lower-income people instead of recreating the city as a place of affluence and pushing poor people out to distant suburbs. As more affluent suburbs try to create new mixed-income developments using public finance, leaders need to think about creating spaces for lower-income folks instead of adopting the same policies that push poor people out.

What do you think is the most important takeaway from the book for readers?

One is that real estate markets, especially in cities, are politically constructed. They’re not some sort of magical “free markets” where people exchange widgets. It’s not the magic of the market that is making rents and home values go up that’s causing pain and displacement among low-income renters. These phenomena are shaped by policy. And over the last 25 to 30 years especially, but really over a longer period of time, the city has chosen not to adopt policies that favor inclusion of low-income people, but rather has favored policies and trends that benefit wealthier homeowners and commercial property owners.

Educators from Georgia State are empowering teachers and students across the state to incorporate the arts into traditional science and math studies.

As the COVID-19 pandemic persists, scientists around the world and at Georgia State are working tirelessly to outsmart new variants and plan for the next virus with pandemic potential.