Georgia State historian Nick Wilding lives a double life. On the one hand, he’s a Renaissance scholar specializing in Galileo, one of the great scientific minds of all time. But in a second life, he’s a literary detective sleuthing out forgeries of prized manuscripts and rare books worth millions of dollars. Wilding is so good at this he has been invited to speak to packed audiences at the Library of Congress and auction houses, and been involved in criminal investigations in several countries. The professor and associate chair of history at Georgia State teaches a course on forgery at the Rare Book School at the University of Virginia each summer. And though his most famous finds are of forgeries of Galileo’s works, he is often called in to verify the authenticity of other rare manuscripts.

“I had a sinking feeling when I saw Nick Wilding’s name on an email last May,” admits Pablo Alvarez, curator at the Special Collections Research Center at the University of Michigan Library.

One of the library’s great treasures is Galileo’s presumed draft of a letter, along with sketches of the moons of Jupiter, that are linked to his historic epiphany — that the planets of our solar system orbit the Sun. The library acquired the document in 1938. 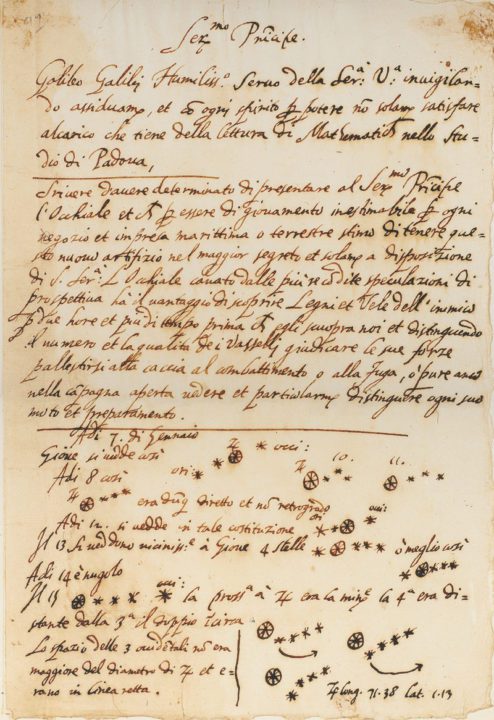 After questioning the watermark and handwriting on this manuscript by Galileo, Nick Wilding helped determine that it is indeed a forgery. Image courtesy of the University of Michigan Library.

Wilding had suspicions that the document — which had already been authenticated by several Galileo scholars — was actually a sophisticated fake.

“The document was supposed to be a draft,” Wilding says, “but in this draft, Galileo had on his Sunday best — a formal hand. At that time in Europe, most people had different styles of handwriting to suit different purposes.”

There were other anomalies that only an ardent scholar of the astronomer, already intimate with every quirk of his writing styles, would see. That includes Galileo’s habit of letting the crossbow of a “t” dip into the letter “e” if it followed (absent in the library document), or the fact that one batch of ink had been used for observations that were nearly six months apart. Even the quill, to Wilding’s eye, seemed wrong—“broad and cut to a chisel tip, a quill that Galileo never used,” he explains. Sherlock Holmes couldn’t have been more discerning.

For scholars and curators, original documents are treasured objects that are like living time capsules.

“For 12 years, I have lived with this manuscript as if I too were in the 17th century,” Alvarez says.

He often showed it to students, faculty and donors, and used it to help explain modern astronomy. But when he got the fateful email, he immediately went to take photos of the manuscript’s watermark as Wilding had requested. Paper was once made by hand, and watermarks identify the place of origin, and often the manufacturer. The watermark in this case was a circle with a three-leaf clover and the monogram, “AS/BMO.” Within a month, with the help of colleagues, Wilding and Alvarez knew it was indeed a fake. “BMO” is an abbreviation for the Italian city of Bergamo, and matches the watermark in documents dated to 1790 in a reference book about ancient papermills. That paper and watermark did not exist nearly two centuries earlier in 1610 when Galileo would have penned his draft and drawings. By June 10, the evidence was overwhelming. The document had likely been forged by a notorious counterfeiter, Tobias Nicotra. In fact, while researching the Michigan document, Wilding discovered another Nicotra Galileo forgery held by the Morgan Library in New York City.

“That book is as close as you can get to sitting next to Galileo and looking through the telescope with him. It has a special place in the history of science. Galileo’s discovery opened up new questions about what it means to be human.” — Nick Wilding

Wilding’s remarkable sleuthing builds on an even more astonishing 2012 discovery, the one that first rocketed him to renown — when he discovered a forgery of Galileo’s most famous work, the Sidereus Nuncius — which first lays out his revolutionary reordering of the solar system.

“That book is as close as you can get to sitting next to Galileo and looking through the telescope with him,” Wilding says. “It has a special place in the history of science. Galileo’s discovery opened up new questions about what it means to be human.”

Galileo’s etchings of the moons seen from his telescope on successive nights show them moving — which could only happen if they orbited the planet. Only 95 copies are in existence. According to a 2013 article in The New Yorker, Owen Gingerich, a professor emeritus of astronomy at Harvard, called Galileo’s account of Jupiter’s moons “the most exciting single manuscript page in the history of science.”

The forgery, which first showed up in 2005, boasted Galileo’s signature along with five watercolor paintings of Jupiter’s moons instead of the etchings found in other versions. It became a worldwide sensation.

Wilding found many details of the manuscript questionable — from the borders of a particular stamp to printing errors.

“I realized just how huge this might be,” Wilding says. “So, I had to get airtight evidence of the forgery.”

Wilding said he first became interested in Galileo when he read “an amazing piece where he says the universe is a language written by God, and the characters God uses are mathematical figures, such as circles and triangles. When we look at the heavens, we are looking at those figures, at geometry in motion. I had never come across such a poetic and beautiful passage in a scientific work, and I’ve been hooked ever since then on trying to understand Galileo.”

As to the forgeries, they are important in their own right, he explained, since they sometimes suggest an alternative account of Galileo’s reasoning, with more hesitation or struggle. This is true of the Michigan document.

“But that’s not how it happened,” Wilding says. “He really did have a eureka moment. He arrived quickly at the simplest, most beautiful and correct explanation and that is all the more remarkable. If we want to know how discovery happens, then we need to be sure the document of that discovery is authentic.”

Wilding, who is writing a biography of Galileo, is also compiling the forgeries he has found into a book. The University of Michigan, meanwhile, is considering making the forgery part of an exhibit and symposium. In October, Wilding will give a talk in the university’s observatory, where the manuscript will be on display.

The National Institute for Student Success is showing that in higher education, there is, indeed, a better way.

By Michael Davis (B.A. ’03)
Kicking It With Michael Hayes

The versatile punter, kickoff specialist and placekicker is ready to become the Panthers’ next special teams star.