Calm In The Storm

As told to Bobbin Wages Eastwood

As told to Bobbin Wages Eastwood

With his food distribution business facing the uncertainties of the COVID-19 pandemic, René Diaz still finds ways to serve customers and those in need.

FROM THE VERY BEGINNING, my priorities were protecting our 400 employees as well as securing the supply chain. I started devising a strategy during the week between Christmas and New Year’s Day, when I was on Rosemary Beach in Florida with my wife and two daughters. At that time, I never thought the pandemic would escalate so much, especially in the United States.

I put together a team of three people to assess our imports from Asia. Our coconut water and rice come from Thailand. We buy products from five vendors in China, but only one is a major item for us — garlic. We evaluated those shipping channels because when you order goods from overseas, two months can pass before you receive them. I knew if I could get the products out of the manufacturing plants to the docks and onto a ship, I’d be safe. In January, for example, we ordered six months’ worth of garlic. By mid-February, vessels were unable to dock in China, causing garlic prices to skyrocket. 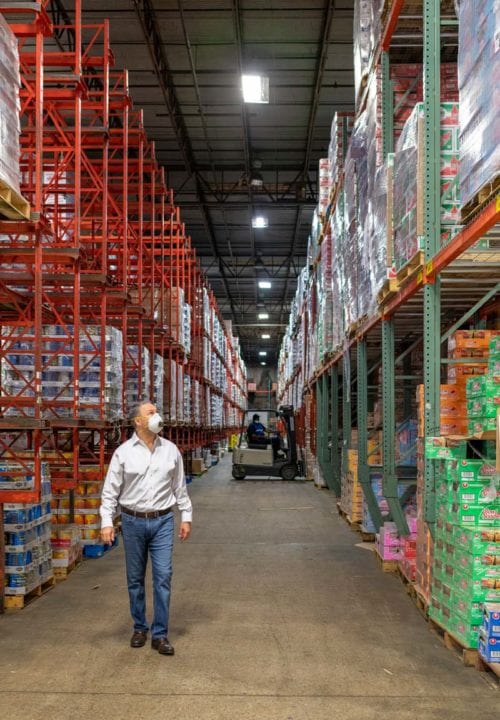 In February, I assembled a different team to address human resources and safety concerns. We have a protocol in place for emergencies like hurricanes or fires that may force a temporary shutdown. You can prepare for a hurricane. You can’t foresee a fire, but there are defined steps to take when fires end. A pandemic is different. You don’t know how long it’s going to last. It’s really hard to plan from a holistic perspective, and you can only do so much.

We came up with a three-part road map. Phase one was proactive. We acted on aspects within our control, such as stocking up on certain supplies. By March 13, we moved to phase two: execution. I sent 90 percent of my office staff home to telecommute. Most of our salespeople conduct business from our call center, but we asked our outside reps to adopt that call center mentality as well, and not to see customers unless they took the appropriate precautions.

Now we’ve switched to the third phase, which is reactionary. So, if a cheese company closes, we quickly pivot as opposed to trying to forecast that kind of event. At this point we’re in the middle of the ocean with no one steering the ship. All we can do is wait for something to hit. Take Gainesville (Ga.), which is the chicken capital of the world as well as a current coronavirus hotspot. We purchase three containers of fresh chicken per week. In mid-May, we procured a week’s supply of frozen chicken from those factories. If those plants shutter, we’ll have back-up stock while we go into reactionary mode.

We’re also surveying our resources and gearing up as though this were a war — in case there’s another attack.

In a sense, we are blessed that our revenues fall within three major divisions: protein, grocery stores and restaurants. Restaurants closed in March, and our sales tanked 90 percent in 24 hours. But at the same time our restaurant business plummeted, our grocery store sales shot up, compensating for what we had lost. When supply chain issues arose, we moved inventory we typically sell to restaurants, like certain cuts of meats, and offered them to grocery stores.

When bad things happen, I usually remain calm. The bigger the crisis, the more tranquil I become. In terms of leadership, if you panic, your people will panic. Businesses can make mistakes with knee-jerk reactions. When a lot of our competitors saw this coming in March, they suspended operations. Meanwhile, hundreds of thousands of dollars in fresh protein that would’ve spoiled unless they were able to freeze it sat in their coolers. Our staying open gave us an advantage. As restaurants started reopening, we picked up so many new customers who no longer had access to their usual distributors. 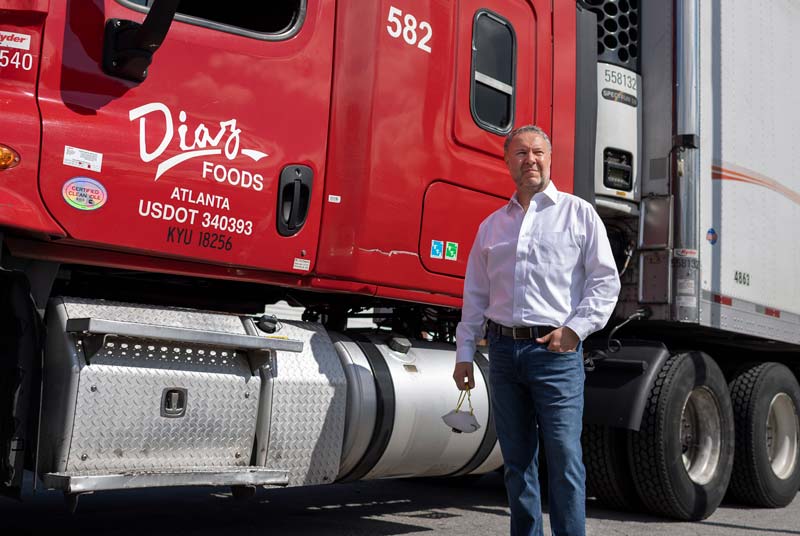 When one of our drivers showed up to a new restaurant in Ohio, the whole team rushed outside to cheer him on because they couldn’t find ground beef and chicken from anywhere else. The driver snapped photos of our customers proudly standing beside him.

During the pandemic, we’ve donated 4,500 pounds of food, including fresh produce, canned soup, pasta, boxes of cheese and pallets of tortillas to nurses and doctors at Grady Memorial Hospital. The person who delivered it works in communications in our office. He had a brain tumor, and an emergency procedure at another hospital saved his life. To him, it was a privilege to drop off the provisions and “pay it back.” We donated 20,000 pounds of food to Atlanta Public Schools; 5,000 pounds to Agape, a nonprofit organization benefitting underserved youth; 2,500 pounds to an event co-sponsored by Telemundo and the Mexican Consulate; 2,500 pounds to Corners Outreach, a nonprofit focused on increasing high school graduation rates and improving career opportunities for underemployed parents; and 5,000 pounds to a women’s shelter called Women Giving Back and a church pantry in Virginia. The Atlanta Community Food Bank also picks up food from us on a weekly basis.

I was born in Cuba in the Communist regime and came to the United States when I was 7. My father’s family owned cattle ranches and was very wealthy. But we had to flee the country and lost everything. The police came and gave us 15 minutes to evacuate our home. I learned the English language in a first-grade special education class at Garden Hills Elementary School. America didn’t have to give us anything, but this country gave my family and me an opportunity to succeed. To me, that’s something you have to repay.

“During the pandemic, we’ve donated 4,500 pounds of food, including fresh produce, canned soup, pasta, boxes of cheese and pallets of tortillas to nurses and doctors at Grady Memorial Hospital. The person who delivered it works in communications in our office. He had a brain tumor, and an emergency procedure at another hospital saved his life. To him, it was a privilege to drop off the provisions and ‘pay it back.’”

Tanya Washington Hicks has felt the impacts of the coronavirus first-hand. It will forever change the way she helps educate future generations of lawyers.
As told to Tony Rehagen
A nurse at Grady Memorial Hospital, Lauren Skinner is also pitching in to help keep her co-workers safe in the time of coronavirus. She's taken to designing and sewing N95 mask covers and leading a Facebook group to show others how to do it, too.
As told to Michael Davis (B.A. '03)