Tam Kỳ was known before the Vietnam War for its scenic beaches. Ed Sherwood remembers the provincial city for very different reasons.

In May 1969, a major battle pitted American infantry troops and well-trained North Vietnamese soldiers in a bloody contest for the city. As a young first lieutenant, Sherwood led an infantry platoon of the celebrated 101st Airborne Division into the 28-day clash. He was wounded by shrapnel and flown out to convalesce in Japan, then home. Barely more than a year before, he’d been a student working on an English degree at Georgia State College, as Georgia State was then called. 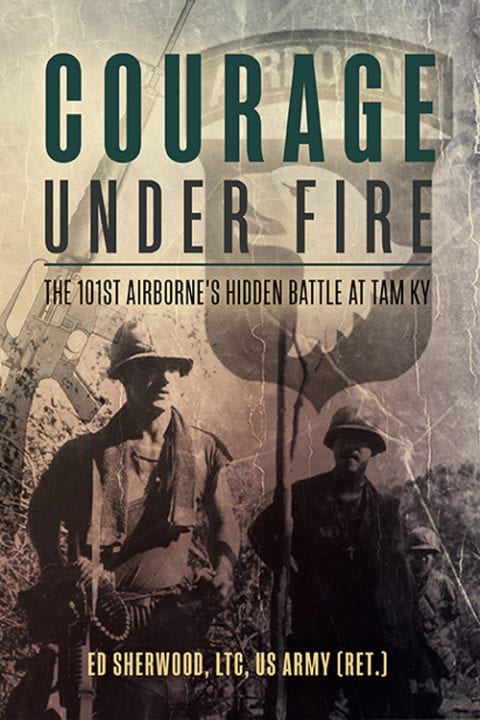 “Courage Under Fire: The 101st Airborne’s Hidden Battle at Tam Kỳ” chronicles the courage of the young soldiers who fought at Tam Kỳ.

“The battle of Tam Kỳ is a largely unknown and untold story,” said Sherwood. “I wrote my book so the accounts of the young soldiers who fought there will live beyond their deaths.”

After starting his book in 2015, Sherwood, now 76, worked with urgency, often putting in 10-hour days. Time was doing what the battlefield had not — slowly taking away the rest of his comrades.

“As the age of Vietnam veterans edges into the 70s and beyond, fewer are available to tell their stories,” he said. “Those stories are worthy to be passed down to other generations.”

Sherwood located and interviewed some 40 soldiers who fought at Tam Kỳ. He also dug into formerly suppressed battle records at the National Archives. (The operation was never disclosed to Americans during the war. The administration of President Richard Nixon, fearful of adding fuel to the antiwar fires raging in the U.S., managed to keep the battle and its heavy casualties —at least 121 GIs killed and 404 wounded — out of the headlines.)

Sherwood emphasizes “Courage Under Fire” is far from a pro-war book.

“It is intended,” he said, “to recognize the courage of the young soldiers who fought at Tam Kỳ.”

Sherwood served 20 years in the Army, retiring as a lieutenant colonel in 1988 from a medical disability likely caused by Agent Orange exposure. He earned his second degree, an MBA, in 1976 while on active duty.

“An MBA was one of the desired degrees for officers,” he said. “In peacetime, the military runs a lot like a business, with budgets and programs and human resources issues. There’s a high correlation between military service and business administration.”

“Jackie, my wife of 53 years (formerly Jackie Cranford), and I met at Georgia State in fall 1967,” Sherwood said. “She was a member of Alpha Phi. We were engaged in January and married in August 1968, three months after I entered the Army and five months before I went to Vietnam.”

The Sherwoods have two adult daughters, a deceased adult son, seven grandchildren and 10 great-grandchildren. They live in Peachtree City, Ga.

Long a welcoming place for veterans and service members, Georgia State continues to rank among the top schools in the nation for support of military-connected students. Thousands of alumni have earned commissions through its ROTC programs, and every campus has Military Outreach Centers.

Sherwood credits a former Georgia State military fraternity, the National Society of Pershing Rifles, as an influence. He met lifelong friends, including John Haluski (B.A. ’67), Mike Evenson (B.A. ’68) and Walt Chrietzberg (B.A. ’67), in the Georgia State chapter. They socialized together, learned military basics and experienced Vietnam combat about the same time. They rose in the ranks together, Evenson, Chrietzberg and Haluski all making colonel. Evenson went on to become a civilian senior executive service director — the equivalent of a two-star general — at a major Defense Department agency.

“I met Ed in 1963 as a pledge in the Pershing Rifles,” said Haluski. “We dated close friends in the same sorority in 1968 and later married them just after becoming infantry lieutenants. He was working to put himself through college, skillfully managing his time and supporting ROTC and Pershing Rifle activities.”

“A friend for life who can be counted on,” Chrietzberg said. “What else is more important?”

Evenson was Day Student Government Association President in 1968, but he was a humble, fearful Pershing Rifles pledge in 1964. The stern big brother who tested him — Ed Sherwood — became a close friend.

“They will stay with us the rest of our lives, every day a memorial day as we remember our fallen, fellow soldiers, brothers in arms.”
— Ed Sherwood, from “Courage Under Fire”

Top: Loading up a Huey (HU-1) for a combat assault. Bottom: An M-60 gunner. Images courtesy of Ed Sherwood.

Left: Loading up a Huey (HU-1) for a combat assault. Right: An M-60 gunner. Courtesy of Ed Sherwood.

Sherwood remains a man of faith. (Along with his two Georgia State diplomas, he holds a master of divinity degree from Luther Rice Seminary.)

“Why I was spared in Vietnam when others were not remains a mystery,” he said. “What I do know is that God used my combat and Army experience to shape my life of faith.”

Sherwood has made peace with a war that cost him friends and that seems, even now, as filled with contradictions and ironies as 52 years ago.

A Sheraton Hotel today sits on the pristine beach at Tam Kỳ, near the battlefield. Tourists visit from all over the world. Americans are welcome guests.

“On Memorial Day,” Sherwood says, “instead of hearing thank you for your service, I and other veterans would much prefer to hear these words: Remember our fallen.

“That’s the recognition most combat veterans I know would appreciate the most.”

Renowned investigative journalist, Pulitzer Prize-winning author and professor of practice Douglas Blackmon leads Georgia State students to examine some of American history’s most difficult chapters and bring to life the stories of the people who suffered through them.
Interview By William Inman (M.H.P. ’16)
After meeting at Georgia State, Lance (MBA ’03) and April (B.A. ’01) Ledbetter embarked on a lifelong journey together — as husband and wife and as co-founders of dust-to-digital, a Grammy award-winning record label mining music’s past to preserve it for future audiences.
By Henry Lake