Did You Know That Tasha From the New Geico Commercial Is Really Georgia State’s Nicci Carr?

The film student and staff member shows off her dance moves while starring in Geico's 'Scoop, there it is!' ad featuring ‘90s hip hop duo Tag Team.

Did You Know That Tasha From the New Geico Commercial Is Really Georgia State’s Nicci Carr?

The film student and staff member shows off her dance moves while starring in Geico's 'Scoop, there it is!' ad featuring ‘90s hip hop duo Tag Team.

By the time she moved to Atlanta from Los Angeles in 2017, Nicci Carr (B.A. ’21) had almost given up on acting. Though it started out promisingly enough, Carr’s career wasn’t making ends meet, nor did it seem like it was on the verge of taking off.

Little did she know the acting bug would one day bite again as she watched a production film in Woodruff Park, just outside her office window at Georgia State.

Three years after jumping back into acting, Carr is starring in the latest Geico commercial, which features a hilarious remake of Tag Team’s hit “Whoomp! (There it is).”

“I was just being me,” Carr says of her performance in the spot, which was released online Christmas Day and has more than 13 million YouTube views. “It was the best Christmas present ever.”

Carr makes time to act for TV series and commercials when not at work as the undergraduate coordinator in the Biology Department of the College of Arts & Sciences. She is also a student at Georgia State, working toward a bachelor’s degree in film with the hope of pursuing a master of fine arts in acting. She wants to eventually teach acting once she retires from the craft.

With a list of credits that includes popular shows such as “Atlanta,” “Good Girls” and “P-Valley,” Carr says she’s earned more acting work in her short time in Atlanta than in more than a dozen years in L.A., where her first job was as an extra on “The West Wing.” 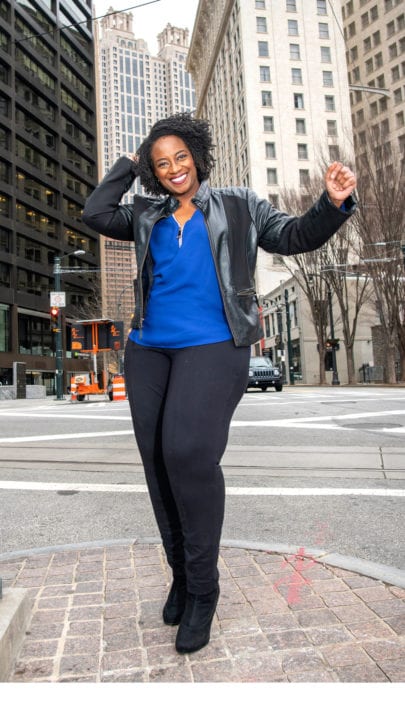 Before deciding in 2004 to pursue a career in Hollywood, Carr worked as an elementary teacher in the Washington, D.C., area. She was acting in community theater and church plays but wanted more.

“I left stability for the unknown,” Carr says. “It was a scary thing, but I wanted to live this dream.”

To keep the bills paid between acting jobs, Carr worked as an administrative assistant at the University of California, Los Angeles, and eventually finished the master’s degree she’d started years earlier, in D.C., but hadn’t completed. With that degree in counseling, she started working as an advisor at the University of Southern California in 2010.

Though she continued to pursue acting on the side over the next several years, the grind of auditions not turning into jobs, pilots not getting picked up and ad campaigns getting canceled before the commercials were shot burned her out on the industry. In early 2017, she and her then-husband moved to Atlanta, where Carr got a job at Georgia State.

“We moved,” she says. “I had quit the industry. I got to Georgia State, and I was working in Langdale Hall. In the summer of 2017, we moved our offices to Park Place, and outside my window, which faced Woodruff Park, they were shooting something. I saw the boom, I heard the director and I heard the assistant director. I saw the lighting and the rigs, and I was like, ‘Is it calling me back?’

“I felt like the industry was surrounding me, saying, ‘Nicci, give it one more chance.’”

Later that summer, she signed with a talent agent in Atlanta and within two months had auditioned for and booked a guest-star role on the series “Atlanta.”

Since then, she’s worked on several other series, including “The Gifted,” “Good Girls” and “Dynasty.”

The Geico ad, which was shot in November, is now bringing Carr — and her dance moves — into millions of living rooms across the country. And she says she has no plans to quit acting anytime soon.

“I’m overwhelmed with gratitude,” says Carr, who will turn 50 this year. “I feel like I’m segueing into the second part of my life. I want to tell people: ‘It’s never too late for you to live out loud.’ I’m living proof. If you still have breath in your body, it’s not too late to live your dream.”

With his food distribution business facing the uncertainties of the COVID-19 pandemic, René Diaz (B.B.A. '87) still finds ways to serve customers and those in need.
As told to Bobbin Wages Eastwood
Tanya Washington Hicks has felt the impacts of the coronavirus first-hand. It will forever change the way she helps educate future generations of lawyers.
As told to Tony Rehagen