While helping the Panthers secure a Sun Belt Conference title and an appearance in the NCAA Tournament, Eliel Nsoseme (B.A. ’21) hasn’t lost focus on his family back home.

The Democratic Republic of Congo (DRC) can be a harsh place, but the turbulence in the central African country can also breed ambition. For Georgia State’s Eliel (e-lee-el) Nsoseme (so-sem-ee), 24, it’s driven him to seek a better life for his family, away from his hometown of Kinshasa and its sporadic violence, unreliable electricity, climate issues and notorious traffic jams.

Nsoseme, the 6-foot-8 forward/center on the men’s basketball team, has a sister in Belgium, and a sister and brother studying in France. His father, mother and younger twin sisters are still in the DRC. 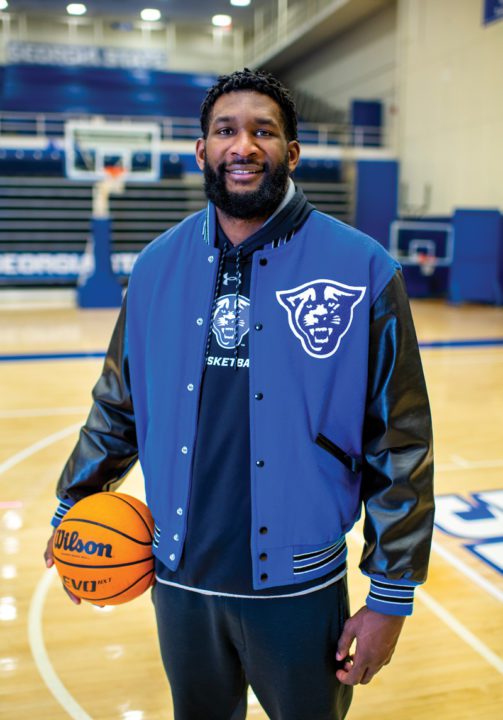 Eliel Nsoseme helped the Panthers end the season with a 10-game winning streak and their fourth appearance since 2015 in the NCAA Tournament.

“Whether it is through basketball or professional life, when I have the means, I will go get them,” Nsoseme said. “I will go back some day and try to help make my city better, but my first mission is to make sure my family is OK.”

Nsoseme’s selflessness stood out on the basketball court. Instead of trying to polish his offensive moves and develop his right hand — he is left-handed — Nsoseme kept to his strong suits to make sure the team won. He wasn’t thinking about developing his skills or impressing professional scouts when the Panthers were in close games. He was too busy playing defense and rebounding, and pumping up his teammates.

Nsoseme’s leadership last season helped bring the Panthers a Sun Belt Conference championship and a ticket to their sixth all-time appearance in the NCAA Tournament.

A 16-seed, the team faced down top-seeded Gonzaga in round one, and for nearly 30 minutes kept the Bulldogs at bay in a contest that included 17 ties and 10 lead changes. Even after Nsoseme left the game with an injury, with just over 6 minutes left to play in the first half, the Panthers would not be undone until nearly halfway through the second half, when the Zags started a 24-1 run that shut the door on Georgia State’s hopes of an upset.

A 4.0 student in film and media, Nsoseme certainly has ambition to play basketball professionally, but it’s neither Plan A nor Plan B, he said. The plan is simply to succeed.

He’s not specific about why he is scared for his family, and why it is so important he help them leave Kinshasa, but he lifts the veil slightly on what it is like to live in the 14th-largest city in the world with more than 15 million people. While frightening people aren’t around every corner, there are still plenty of desperate people, he said.

“I love my city. I love where I’m from, but it’s just not safe,” Nsoseme said. “There are a lot of things that are going on. There are kids living on the street. You come back home at night and they follow you, harass you, maybe try and take your phone, take your money. There are always situations like that.”

Jean, his father, had him take karate, judo and self-defense instruction. Eliel is tall and imposing, but his father knew the risks of the street.

The Democratic Republic of Congo, the second-largest country in Africa, shares a border with the Republic of Congo along the Congo River. Both countries are filled with mineral riches fought over and died for. They produce approximately 65 percent of the world’s cobalt, an essential ingredient in lithium-ion batteries which power devices from electric vehicles to cellphones.

Nsoseme holds up his phone and waves it with an air of pride, but for all the importance of Congo cobalt and the country’s deep veins of copper, the DRC is one of the least developed countries in the world because of corruption and violence. Nsoseme worries about his father, a pastor, venturing outside the city to minister in small villages.

“He goes out to these villages to bring the word of God and you don’t know who is there and, well, we don’t like to talk about it,” he said.

What he likes to talk about is basketball, soccer and cooking. Nicole, his mother, taught him to cook and, once in a while, he whips up a Congolese meal. His favorite is fumbwa, a stew of fish, peanuts and leafy green vegetables.

Nsoseme, of course, was a soccer player before he was a basketball player. “I still think I am better at soccer than basketball,” he said.

But by the time he was 10, Nsoseme had become too fearsome for the kids on the pitch. He was adding muscle with the height and scoring a lot of goals on headers. Pretty soon he found himself being excluded from games. His 6-foot-7 father guided him to basketball.

Nsoseme became a star on an independent basketball team for teenagers in the DRC. His feet were agile, thanks to soccer, and when he grew to 6-8, a private school in the basketball mecca of Kentucky wanted him to play there. The U.S. Embassy in Kinshasa, however, turned down his visa request twice.

“It was tough,” he said. “I had come to love basketball.”

But a door opened in Canada. Nsoseme was offered a scholarship to a private school in Ontario and off he went — into the cold.

It was November 2015 when he arrived in Canada and the cold, he said, was numbing. Congo’s average temperature is 60 to 80 degrees, so Nsoseme stepped into an ice box.

But he adjusted well. So well that after his one-year stint at the private school, Nsoseme was signed to a scholarship by the University of Cincinnati, one of the top mid-major Division I programs in the U.S. He spent two years there, and when UC coach Mick Cronin left for the job at UCLA, Nsoseme transferred to Georgia State.

This was more his speed, not just because the Atlanta temperature aligned more with the DRC’s, but so did the diversity. “More people that look like me,” he said of the city campus.

Nsoseme is eager to see what is next so he can help the people who look the most like him — his family. He has unwavering faith in God to help him protect them, he said.

“Because of God I’m here. I’m a strong believer,” he said. “The first thing I do when I wake up in the morning is pray and thank God for being here. There are crazy situations back home that could endanger my family, so I also pray to God to protect them.”

Check out the Panther Insider Podcast, hosted by the Voice of the Panthers Dave Cohen (B.A. ’94), featuring Nsoseme here.

By Torie Robinette Durham
The Chef With No Stomach