“I fell in love,” Matthesen confesses. “I saw a business model too powerful to ignore.”

“The premise is to take the farmer all the way from the coffee crop to the end market as a true partner,” Matthesen explains. “Farmers control more of what they grow, bypassing traditional intermediaries — the farm agent, the importer, the roaster, four or five transactions in all — that normally eat away margins. In the end, the farmer growing the coffee receives more for the crop no matter how the market fluctuates.”

Matthesen says the business model has continued to produce a significantly greater net income for farmers.

“Thrive reinvented an industry in crisis by transforming a 400-year-old pricing model that excluded farmers from sharing in success,” he says. “And it proved to be sustainable during a global crisis when the support it provides is most critical.”

Thrive’s business model directly impacts the economic and social aspects of the entire coffee-growing community, not just farmers and their families.

Matthesen saw farmers, trapped for generations in the exploitative boom-and-bust commodity cycle of a $100 billion global industry, think and make decisions like owners.

Jones launched Thrive in 2011 with its first partnership in Monteverde, Costa Rica. At the time, Matthesen had been working in the financial services world, learning at heavyweights like SunTrust Bank and General Electric, and at a specialty finance firm he founded himself.

Sold on the Thrive concept, Matthesen joined its board of directors in 2012 and went on to help create Thrive’s strategic and capital business plans.

“I found it deeply rewarding to apply what I’d learned for 30 years in finance and as an entrepreneur to help Thrive farmers prosper,” he says, “and to change the culture of coffee communities all over the world.”

Matthesen fell in love, but not with the dollars and cents and spreadsheets of an exciting new concept of business and its purpose.

He fell in love with stories of a 55-year-old farmer in Guatemala who was able to build his mother her first home with coffee earnings through a Thrive partnership.

He fell in love with the farmers of a remote Brazilian community who met with him one day in plastic chairs surrounded by their meager coffee plots and voted, one by one, to give Thrive a try and who now find themselves more prosperous, crop by crop.

“Each time I visit one of our farm communities, it takes my breath away,” Matthesen says, his voice thickening. “Every single time. Our partners tell us, ‘You created hope for us. You restored our integrity. You helped us elevate our community.’

“Thrive is changing economic sustainability for a lot of people and an industry. But, as we have learned, it is the love and respect for our talented farmers that truly creates this unique, long-term partnership.”

Caffeinated by a Contract 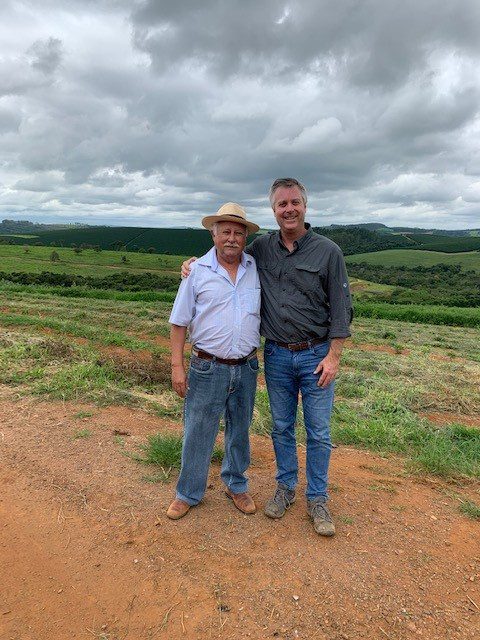 “The numbers came hard,” as Matthesen puts it.

In 2015, everything changed. A contract with fast-food juggernaut Chick-fil-A propelled Thrive into a growth stratosphere normally reserved for high-tech unicorns.

“We ended 2016 with an Inc. Magazine 500 listing of 8,700-percent growth,” says Matthesen, who joined Thrive full time as president in 2015. “We charted as the second-fastest-growing business in Georgia.

“From that, we grew about 20 percent a year until 2019. COVID wasn’t good for anyone in the food services business, and our sales fell off. But now we’re back to pre-pandemic numbers and looking at 30- to 35-percent growth next year.”

Thrive today has more than 5,000 partner growers in 14 countries. Forty employees buzz around the Roswell, Ga., headquarters, and satellite employees work in Costa Rica and Guatemala.

Thrive has even branched into partnerships that cultivate tea.

“Peppermint tea cultivated from leaves grown on the Baley family’s farm in Oregon and black tea harvested by farmers like Claudine Mukesharugo in Rwanda are just a couple of the farmer-direct teas Thrive supplies Delta Air Lines,” says Matthesen.

“Through our partnership with such a globally respected brand, Thrive and Delta Air Lines are supporting more than 5,000 tea farmers worldwide while reshaping the future of tea, sustainable agriculture and purposeful business.”

In August 2022, for the fourth year, Thrive was honored as one of the world’s most impactful companies, receiving a “Best For The World” award from B Lab, a globally respected nonprofit that measures a company’s environmental and social impact.

“For me,” Matthesen says, “it’s just an awesome testimonial to see the benefits of our business come full circle.

“We focus on people who have long been disadvantaged, and our whole business model is based on treating them as human beings by giving them a true stake in the sale of their products and more predictable incomes in an ever-changing coffee market.”

Matthesen grew up with a love for the outdoors in the American West. He earned his bachelor’s degree in 1985 from the University of Colorado at Boulder, studying finance.

He joined SunTrust Bank in Atlanta, and in 12 years rose to bank vice president. He also enrolled at Georgia State to get his MBA.

“Working full time and going to school allowed me practical training to go with my academics,” he says. “I learned faster and better. The academics became more real.”

“We had no computers then,” he recalls. “Imagine — you had to put your butt in a chair and do homework late at night out of a book.”

A lasting Georgia State gift? Peers in the MBA program.

“I went to school with future leaders at Coke and Georgia-Pacific, among others who would be catalysts and leaders in Atlanta,” he says. “I got almost as much from the peer group as from the program.”

Following his role at SunTrust, Matthesen held positions in financial and remote equipment firms before leading at G.E. as a senior vice president. He then founded his own specialty finance firm, Wall Financial Services, in Alpharetta.

His deep and wide portfolio of skills — and a sterling reputation — now guides Thrive.

Ryan Gunnigle, CEO and owner of Kids2, is an admirer.

“Tom is grounded in passion and faith — and being true to one’s self,” Gunnigle says. “He’s selfless and authentic. He walks his talk in everything he does.

“In my experience, the leader sets the company culture. Thrive lives and breathes great values and principles, and those start from the top with Tom. He sets an example that all want to follow — to be better personally and professionally, lift people up along the way, and do what’s right, always.”

“We’re seeing all around that customers want businesses to be transparent, from the way supply chains are run to the way people are cared for,” he says. “I believe the day is coming when businesses won’t be able to simply say they’re socially responsible. They’ll need to show action and give information that proves it.

“We can all welcome the day when businesses move from half-hearted philanthropy to structures and strategies that build sustainability and human consideration into every decision.”