A Different Kind Of Cop

A DIFFERENT KIND OF COP

Capt. Aprille Moore (B.S. ’05), a Georgia State Alumni Association 40 Under 40 honoree, is a community-focused officer who hopes to inspire more women to join the force.

Capt. Aprille Moore is working to build a better relationship between police and the public.

Commander of the Community Engagement Unit of the Fulton County (Ga.) Sheriff ’s Office, Moore oversees partnerships with community organizations, as well as programs and special events that promote positive interactions with officers. 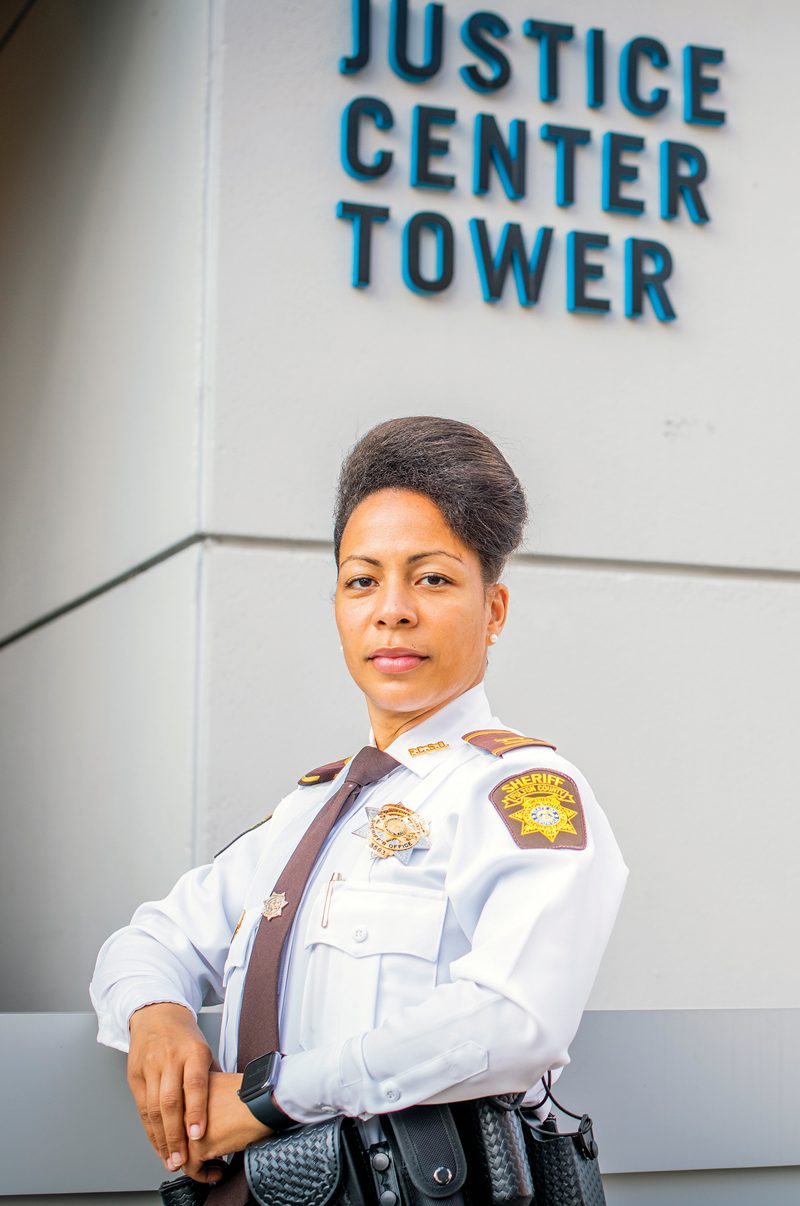 In law enforcement, “We often meet people during the worst parts of their day,” Moore said. “When I talk to people, I always come with a spirit of understanding and trying to know their problems. Many times, their problems are not as black and white as what’s written in the law.”

Moore’s role is to help build relationships and trust between the sheriff’s office and the community. Working in law enforcement for almost two decades, she has also led the office’s training, background and recruitment efforts.

According to the National Association of Women Law Enforcement Executives, women make up less than 12 percent of law enforcement nationwide, and just 3 percent hold executive positions. Moore says women in uniform — in particular, Black women — are vital in communities looking to move forward together in the wake of the #MeToo and police reform movements and racial injustice protests.

“My role is more pivotal than ever,” she said. “I bring a unique perspective to the profession and to bridging the gap between law enforcement and the community.”

Moore says she hopes to use her career as an example to draw more women into the field.

“There are inherent dangers associated with policing,” she said. “But when women are able to see themselves in me, it allows them to push past the fear to join a profession that so desperately needs them.”

Growing up in Decatur, Ga., Moore says she learned the value of hard work and getting an education early on.

“My parents worked really, really hard,” Moore said. “And me going to college was a big thing for them.”

At Georgia State, the criminal justice major was active in campus organizations and held several leadership posts. As president of the Georgia State chapter of the NAACP, she says she forged her love for advocacy and for championing those who feel like they don’t have a voice.

Moore set her sights on law school, but three weeks after she graduated from Georgia State, she gave birth to her son. While he was young, she worked as a 911 operator and eventually for the Fulton County Marshal’s Department.

An avid community volunteer, she’s also an ambassador for youthSpark and for Black Girls RUN!, and she serves on boards for the Junior League of DeKalb County, Delta Sigma Theta Sorority Inc., and Jack and Jill of America Inc.

Her philanthropy is just one reason the Georgia State Alumni Association honored Moore as one of the most influential graduates under the age of 40.

Last fall, she joined the Andrew Young School of Policy Studies’ Office of Career Services & Alumni Relations as a professional-in-residence, offering students a chance to learn more about working in law enforcement.

“Serving in this role reminds me that barriers can be broken,” Moore said. “I hope my story can serve as an inspiration for young girls and women who may have never considered a career in law enforcement.”

By Torie Robinette Durham
The Chef With No Stomach