Joy Woodson entered Robinson’s Flexible MBA program in January 2017. A few weeks and traumas later, she realized 2017 was going to be the year from hell. Woodson’s stepbrother, who had been found in the middle of a suicide attempt, got taken off life support; her beloved dog of 11 years suddenly died; and a major health crisis began to unfold. Even without graduate school, Woodson’s plate was full. She worked full-time as assistant director of marketing and communications at the Center for State and Local Finance, housed within Georgia State’s Andrew Young School of Policy Studies, and had commenced the long journey toward adopting a child. Woodson found herself having panic attacks and crying during class as well as tests. She applied for an emergency withdrawal, which would not negatively impact her academic record.

Woodson re-enrolled in the MBA program the following fall but still found it difficult to concentrate during exams.

“After attempting one test in a classroom, I knew it wasn’t going to work,” she said. “The sound of people typing on their laptops, click-clacking on their calculators, and shuffling their papers was amplified for me. I couldn’t hear my own thoughts.”

“My knowledge of the material wasn’t in question. The problem was external distractions that made it impossible for me to focus,” she said. “Without the Access and Accommodations Center, I would not have been able to finish the MBA.” 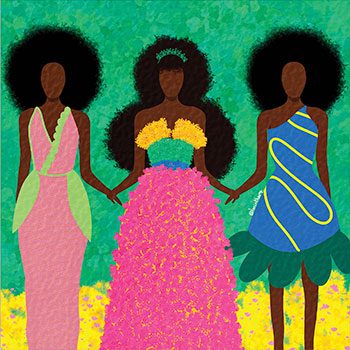 “Friends,” art by Haitian illustrator and photographer Lori Saint Rome, was turned into a 500-piece puzzle by Piece Love Soul.

Woodson graduated in May 2020. The intensifying pandemic and slow, challenging adoption progress sent her panic disorder into overdrive. A new pastime helped her manage the stress: puzzles. But many of the puzzles she purchased remained untouched, causing her to question why she couldn’t even bring herself to open the boxes.

“It dawned on me that those puzzles didn’t speak to me. How many times can you put together a dog, seascape, or donut puzzle before you ask what else is out there?” Woodson said. “I started looking for puzzles featuring artwork related to people of color, but the few pieces I found were pretty low quality.”

Woodson was (and still is) happy with her 9-5 job as assistant director of marketing and communications for GALILEO, a virtual library operated by the University System of Georgia. But the lack of representation in the puzzle market bothered her enough to push her to do something about it. She pored through the notes she took throughout the MBA program and felt confident to start a business, except for the legal ins and outs. She reached out to Perry Binder, who had taught her Legal Environment: Ethics and Corporate Governance class.

“I told him about my idea,” Woodson said. “He couldn’t give me any legal advice but offered suggestions on things to look into.”

She took what he said, reviewed her notes from his course as well as other classes, conducted a bit of Internet sleuthing, and wrote a licensing agreement she has used with 15 artists. 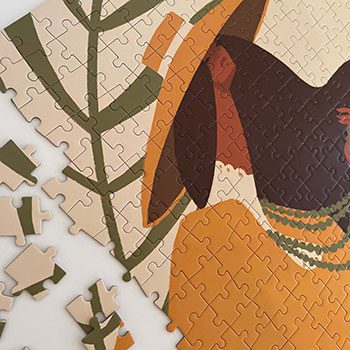 Piece Love Soul launched in April with five adult puzzles of varying difficulty. The artists include a Jamaican abstract artist and musician, a Haitian illustrator and photographer, a Polynesian illustrator, a Chinese painter, and an Indian textile artist.

“I don’t love doing budgets, creating ROI spreadsheets, and paying people. It’s a lot of work,” Woodson said. “But when you notice a problem you can solve and be passionate about, and no one else is doing it, that idea becomes your thing to release into the world.”

Woodson finalized the adoption of her daughter earlier this year. In addition to adjusting to motherhood, she hopes to expand her company’s reach through new collections, partnering with notable brands, and participating in more events.

“I’ve always been an overachiever. I want to do well but also understand everything doesn’t have to happen today,” Woodson said. “I want my daughter to see me putting her first while also working hard and getting things done.”