In celebration of Latinx Heritage Month, aka National Hispanic Heritage Month* (September 15- October 15), the College of the Arts connects with several Hispanic creatives to learn about their backgrounds and the influences that inform their artistic practices. 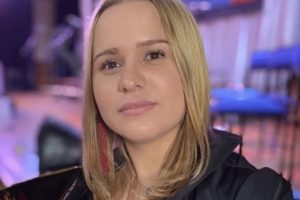 Born and raised in Pinar del Río, Cuba, Arlet Tabares is a first-year master’s degree candidate in Music Performance (orchestral instrument French Horn) at the School of Music. Prior to coming to Atlanta, Tabares lived in Ecuador for five years teaching music and performing in concerts. Here, she reminisces about her Cuban heritage and the captivating sounds that influenced her to pursue music as a career.

Tabares proudly calls Cuba a country of music — part of the culture, full of rhythm, family, community and the Sabor Latin flavor. “As a child living in a humble neighborhood, neighbors would gather to play and dance the rumba every weekend,” said Arlet. “I sometimes would peek from my balcony entranced by the rumba clave of the Guaguancó**. Then one day, someone asked me to sing for them. I did and fell completely in love with the experience. I started to sing on the radio and soon enrolled in music school to learn to play the French horn.”

Click here to watch Arlet perform with the Havana Horns at the Plaza de la Cathedral in Havana, Cuba. 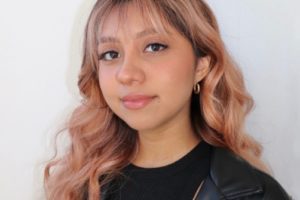 Undergraduate student Araceli Camacho is a 2nd generation Mexican-American pursuing a degree in film and media at the School of Film, Media & Theatre. She chose the film program for its strong networking and film opportunities in the heart of Georgia’s booming film industry. As she prepares to graduate this December, her resume includes numerous art production assistantships for programs including “Stranger Things” (Netflix), “Secret Chef” (Hulu) and Create the Escape” (NBC).

While gaining real-world experience, Camacho shared her observation of Hispanics working in the film industry. “As with most life experiences as a person of color, it is not out of the ordinary in the film industry to be doubted because of your race or ethnicity,” said Camacho. “After a single glance at your skin, people demand the stereotype of a hardworking Hispanic while often not allowing for the same growth opportunities that white colleagues receive.” Camacho also notes a shift in the increase in Hispanic representation on and off-screen and hopes the hiring of more Hispanics will continue, especially among Hispanic women.

Alfonso Cuarón is a Hispanic filmmaker for whom she has deep admiration and respect. The filmmaker is widely known for the 2018 film “Roma,” in which he won the Oscar for Best Director — the first Mexican-born filmmaker to do so. “He has truly paved the way for so many others through his remarkable accomplishments,” said Camacho. “Hispanic people have stories that are so important and need to be expressed. Cuarón does a wonderful job of getting the world to listen.”

Post-graduation, Camacho already has her sights on utilizing her film and entertainment experience and focusing on a creative filmmaking role within a marketing or advertising agency.

Kengel Maysonet, a third-year M.F.A. candidate at the Ernest G. Welch School of Art & Design, isa queer, Puerto Rican artist with a multi-disciplinary practice. Maysonet’s work delves into the complications of race, nationality, religion, sexuality and especially gender. Through sculpture and video performances, they often present viewers with whimsical and symbolic imagery  that points to  complexities of the intersectional self.

Though Maysonet’s work references all facets of their identity, the artist offered to explain how being Hispanidad specifically influences their practice in both positive and difficult ways. “On one hand, it opens me up to an entire other world of inspiration, art and culture,” stated Maysonet. “On the other, I must work to constantly quantify my identity and explain my culture over and over again to a majority-white American audience. Although this othering has its role, my constant exoticization fuels my practice.”

This duality is evident in the video piece “Diáspora and the Exotic Other” in which Maysonet performs in drag and speaks only in Spanish. The artist created the video for a predominantly English-speaking audience. The piece employs visually-stimulating elements that  draw the viewer in but intentionally mislead them. For Maysonet, it is a clever strategy to confront the audience with the fact that not everything can or should be created for their point of view and consumption.

This method of playful bait and switch is evident in the artist’s sculpture as well. In a series of works, Maysonet reimagines the family board game with queer themes and graphic redesigns—disrupting normative institutions by perverting play. In combining adult themes with juvenile pleasure, and using recognizable pastimes, they uncover the suppressed desire to play in their audience.

When asked about their breadth of influences, Maysonet points to late Puerto Rican photographer ADÁL and José Villalobos among his Latinx artistic inspirations. For ADÁL, the images remind them that as Puerto Ricans, “we are all holding our breaths through life.” José Villalobos’s queering of traditionally masculine Mexican aesthetics reminds us all that identity and culture are never straightforward—a beautifully-nuanced undertone, laced throughout Maysonet’s practice

* Hispanic Heritage Month is from September 15 – October 15. The start of the celebration, September 15, is a historically significant day marking the anniversary of the independence of five Latin American countries (Costa Rica, El Salvador, Guatemala, Honduras and Nicaragua), and is a time period to those from Mexico and Chile, which celebrate their independence on September 16 and September 18, respectively.

** Guaguancó is a subgenre of Cuban rumba, combining percussion, voices and dance.