As an intern at the Georgia Environmental Protection Division over the summer, Gabrial Goldner (B.S. ’21) got to learn what life is like in the lab.

ATLANTA — Leaving Newnan, Ga., around 5:30 a.m. each morning, Gabrial Goldner made the 60-mile drive to Peachtree Corners five days a week last summer. After clocking in, she calibrated sensitive scales. She calibrated precision pipettes. She started the warmup sequences required to operate complicated instruments that measure the tiniest particles.

She logged each move so that scientists working behind her would know exactly what she did and how she did it.

Tedious work to some, Goldner thrived in the Georgia Environmental Protection Division (EPD) lab, where she interned while pursuing a master’s degree in geosciences with a focus on water sciences. Her task at the lab was to help prepare for a federal mandate going into effect in January requiring water systems across the country to measure manmade chemicals known as per- and polyfluoroalkyl substances (PFAS).

Sometimes referred to as “forever chemicals” because they break down only over long periods of time, there are thousands of different PFAS, and they’re found in a variety of products — from non-stick skillets to water-resistant clothing to cosmetics. Because PFAS have been widely used in industry and consumer products since the 1940s, they’re also widely found in people, animals and the environment.

“We created these chemicals, and now they’re everywhere,” Goldner said. “And the problem is they stay in your body for a long, long time, and they accumulate.”

The health effects of exposure to high levels of PFAS are only just becoming known. Studies have shown exposure to certain levels of PFAS may lead to reproductive harm, developmental effects or delays in children, increased risk of some cancers and interference with the body’s natural hormones, according to the U.S. Environmental Protection Agency (EPA). Under the federal Safe Drinking Water Act, the EPA is required to regularly assess unregulated contaminants. As part of this process, in December 2021, the agency announced a requirement that public water systems monitor drinking water for 29 different PFAS over a 12-month period during a window from 2023 to 2025. The goal is to better understand where the chemicals are found, and at what levels.

In Georgia, however, the EPD had already initiated a new, targeted PFAS monitoring project. Since winter 2021, EPD has been working with public water systems throughout the state to protect human health and the environment by assessing the level of PFAS contamination in drinking water. At the EPD lab in Peachtree Corners, Goldner is part of the team helping to implement the process for receiving and processing water samples from across Georgia, ensuring the samples are properly assessed.

Goldner, 23, a native of Newnan who graduated from Mountain View High School in Gwinnett County, first became interested in PFAS early in her college career. After a discussion with her adviser led her to switch her major from chemistry to environmental geosciences, a friend who knew of her chemistry background showed Goldner an image of a PFAS molecule. 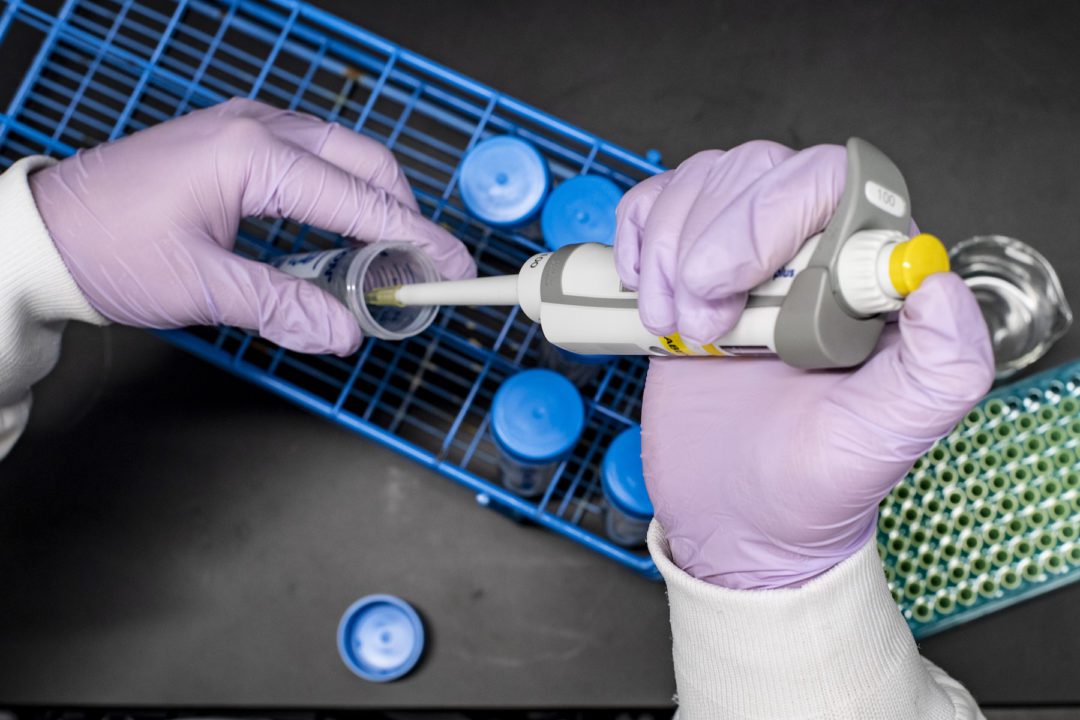 “I could tell immediately this thing was not going to be destroyed by anything in the natural environment, short of a volcano,” Goldner said. “And she said, ‘It’s everywhere, even in the water.’ That really stuck with me.”

Over the course of her undergraduate career, Goldner undertook several PFAS-related projects, including a case study of levels in the water system in Decatur, Ala., for a water resources course.

Her professors took note of her diligent record-keeping and aptitude for learning and using new skills in her work. She conducted research in the Georgia State law library, and learned coding languages and geographic information systems programming while completing class projects focused on PFAS. She completed an Undergraduate Research Conference project on how PFAS move through soil.

Senior Lecturer in Chemistry Elina Stroeva recommended Goldner for a position in the geosciences lab run by Associate Professor Nadine Kabengi, who is also the associate dean of The Graduate School. And Goldner was recruited for the dual-degree program, which lets some students complete a bachelor’s degree and master’s degree on a compressed timeline. Goldner finished her bachelor’s degree in 2021 and plans to complete her master’s by the end of this year.

Though she’d only been an assistant in her lab a short time, Kabengi felt Goldner would be a perfect candidate for an internship program funded by the National Science Foundation (NSF) aimed at connecting students with positions outside of academia. After the EPD donated some equipment to Kabengi’s lab, Kabengi and Goldner toured the EPD lab and Kabengi recommended Goldner for a summer position there.

With a supplement of $27,000 added to an existing NSF grant that funds some of Kabengi’s work, Goldner was able to begin the internship in May.

“It’s going to be so key for her to learn this, because there are new regulations coming down regarding these PFAS substances,” Kabengi said. “She will be at the forefront of people who are trained to do these measurements.”

“It is because of the NSF grant that I was able to take this internship,” Goldner said. “I could probably have gotten a paid internship at the EPD lab, but it would not have been doing this. It wouldn’t have been doing something this specifically helpful to my career. I got to see the testing method from the ground up, and I’ll be able to — from start to finish, once the sample comes in — run the extraction, run the instrument and collect the data all by myself.”

Back on campus this fall to finish her master’s degree, Goldner is now more sure than ever about the career path she found through Georgia State. She’s also started a new position as a part-time scientist at the EPD lab, continuing the work she was doing over the summer, with plans to go full time at the beginning of next year, when her master’s is complete.

“The experiences I got at Georgia State, being able to make the connections I did because I go to school in the city, I wouldn’t trade that for the world,” Goldner said. “It’s just been such a good experience.” 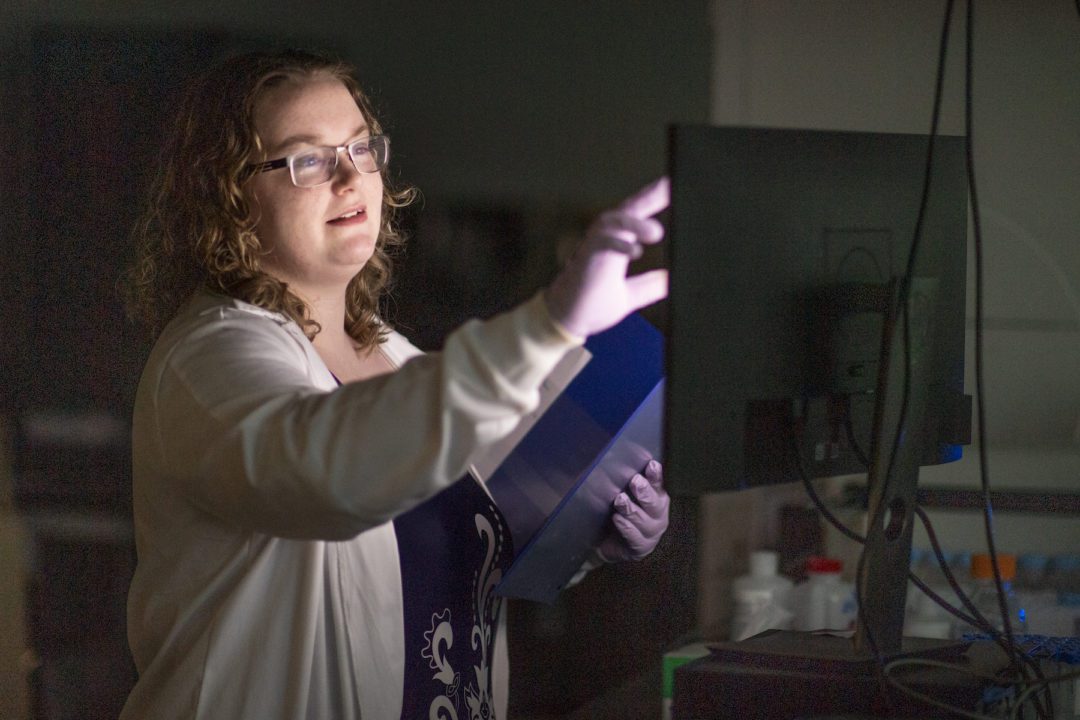 Gabrial Goldner, a graduate student in geosciences who works in Nadine Kabengi’s lab, enters data into a computer system.

Earlier in her geosciences program, Goldner said she considered field work as a viable avenue, but found she gravitated more toward the precision and exactitude required of lab work. The subjectiveness needed to discern the color of a rock sample, she said, didn’t come easy.

“I really came to terms with myself and decided that’s not for me.”

April Hardin, the lead scientist who oversaw Goldner’s internship, has taken note of her diligence and commitment to objective data as well.

“She’s enthusiastic, she’s meticulous and she’s hard-working,” Hardin said. “She has the integrity I can trust to produce good data. She does the hard work, even when it’s not fun.”

To Goldner though, the work seems to be just that — fun. Speaking from the car recently on an early-morning drive to help with the installation of a new laser in Kabengi’s lab, Goldner enthusiastically described running practice tests on a water sample supplied by the EPA.

“We won’t know how we did because the EPA will send the results in writing in two weeks, but I think it went OK,” she said. “I retested it multiple times just to make sure.”