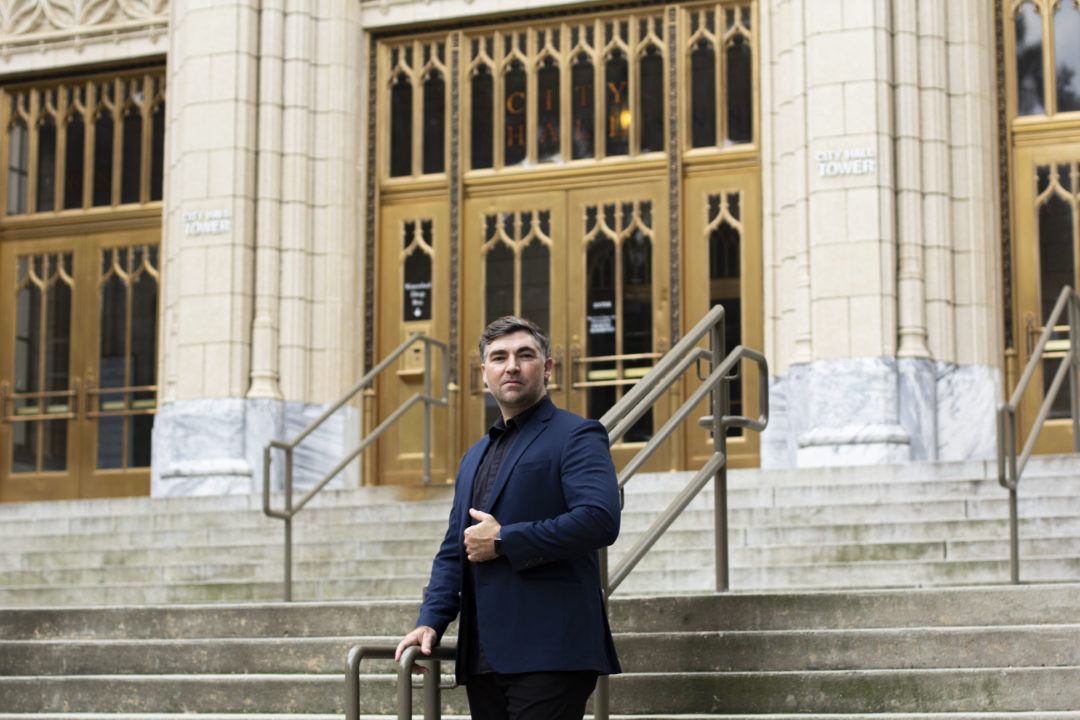 ATLANTA — When a fire broke out under a bridge along Cheshire Bridge Road in Atlanta last year, melting fiber-optic cables, damaging water pipes and rupturing a natural gas line, which added fuel to the flames, Jeffrey Johnson’s team was faced with a tough task.

Johnson (M.A. ’12) needed to help assess the damage to the bridge over South Fork Peachtree Creek and determine the next course of action for the city. After learning the bridge was constructed in 1938, his team helped determine it would save taxpayers money if the bridge were completely rebuilt.

“I take it very seriously that we are using tax dollars,” said Johnson, who studied geography at Georgia State.

Johnson is the director of Geographic Information Systems (GIS) Information Technology for the City of Atlanta, a position that supports transportation, street improvement projects and more.

Since joining the city as a GIS manager in 2015, Johnson has been a key staffer working behind the scenes for some of the city’s biggest events and projects.

In 2019, he helped oversee transportation planning for Super Bowl LIII, including coordinating road closures and supporting the Atlanta Police and FBI around the host venue, Mercedes-Benz Stadium.

When there isn’t a major event in town, Johnson and his team support the city’s daily operations by tracking roadway conditions, the quality of asphalt needed for repair work and improving the condition of sidewalks throughout the city. He is also Atlanta’s liaison with Waze, Google’s traffic navigation app, uploading the latest road changes and potential traffic delays to help drivers avoid getting stuck in gridlock.

Johnson also makes use of new technology to decide which projects need the most attention. With one click of a mouse, he can use a geographic information technology program to view and assess which rehabilitation projects are most urgent and cost effective.

“This is something that has never been done using technology tools. It’s more of a science-based model,” Johnson said. “It’s usually done by hand. Now, we have an inventory of conditions of the roads and this system tells us what projects would give us the most bang for our buck.”

Johnson and his team also support one of Atlanta’s newer safety initiatives, the “One Atlanta —Light Up the Night” program, an initiative to add 10,000 streetlights throughout the city to deter crime in targeted areas.

Johnson, a Georgia native and graduate of Jonesboro High School, said he takes pride in the work he does. He and his team helped roll out the atldot.atlantaga.gov website to be more transparent with the public. The site uses interactive, web-based mapping to help track community projects and provides data on the progress of those projects.

“Since we are a public entity that uses tax dollars to do our work, we need to be accountable for that work,” Johnson said. “It’s all about government transparency and we want to meet or exceed the level of service the public has come to expect.”