ATLANTA — Georgia State University this week welcomed the second-largest incoming class in its history, with 5,133 first-year students starting classes on its Atlanta Campus.

“We’re thrilled to be welcoming all of our new and returning Panthers for the start of a phenomenal new academic year,” Georgia State President M. Brian Blake said. “I’ve met so many who are so excited to be on our campuses, and I know this is truly going to be one of the milestone years in Georgia State’s storied history.”

For those returning to the Atlanta Campus, several new facilities additions were awaiting them. 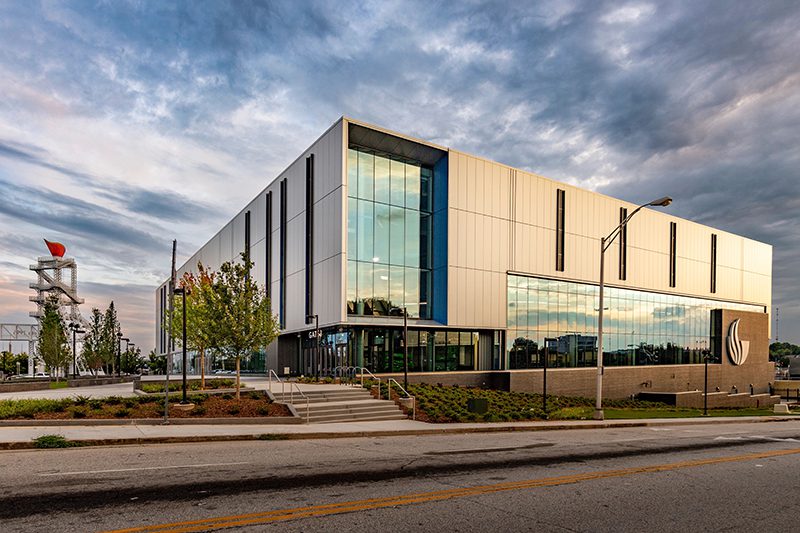 A ribbon-cutting to officially open Georgia State’s new Convocation Center, the home court for men’s and women’s basketball, will be at noon Sept. 15. The investiture ceremony for University President M. Brian Blake will be held there at 1 p.m. the following day.

The Convocation Center, with a capacity of up to 8,000 people, opens this fall and will be the home court for Georgia State men’s and women’s basketball. It will also host the investiture ceremony for Blake, who was named Georgia State’s eighth president in summer 2021. The formal ceremony will be held at 1 p.m. Sept. 16.

A ribbon-cutting ceremony to officially open the Convocation Center will be held at 12 p.m. Sept. 15.

On Tuesday, the university celebrated the renovations to the City of Atlanta’s Hurt Park, a central outdoor gathering space for student activities and events. Georgia State renovated the triangular park bordered by Edgewood Avenue and Gilmer and Courtland streets over the past two years, restoring the fountain, adding new lighting, walkways and handrails, and constructing a permanent concrete stage.

The park and a closed-off Gilmer Street will be the location of this year’s Pounce Down Piedmont, a block party offering opportunities for new and returning students to get to know more about the university. A signature Panther Welcome event hosted by the division of Student Engagement, Pounce Down Piedmont will be from 11 a.m. to 2 p.m. Aug. 30 and include food trucks, music, activities and information booths from departments across Georgia State.

Michael L. Sanseviro, vice president for Student Engagement, said the focus of Pounce Down Piedmont is connecting students, particularly those in campus housing along Piedmont Avenue, to the heart of the Atlanta Campus.

“We wanted to create something that would draw students from the residential core into the social core around the Student Center,” Sanseviro said. “This year we wanted to take advantage of Hurt Park reopening, so there will be engagement stations near housing, leading down along Piedmont and generating excitement as students get to Hurt Park for the event.”

Similar Pounce Around Perimeter events are scheduled for each of the five Perimeter College campuses.

Throughout the first five days of classes, Georgia State is also hosting Ask Me Booths at locations throughout the Atlanta Campus and on each of the Perimeter campuses. At each booth, Georgia State volunteers help students navigate college life and offer maps, Panther masks and other resources.

To help students unwind during the first week of classes, the Spotlight Programs Board hosted a Welcome Back Comedy Show Wednesday in the Speaker’s Auditorium, offering a livestream of the event for students off campus.

On Thursday, the Cultures, Communities & Inclusion (CCI) unit of Student Engagement will be hosting its second annual CCI Fest, an event showcasing the diversity of student cultures and communities on Georgia State’s campuses. The event is presented by the Office of the Dean of Students, the Multicultural Center, Black Student Achievement, Latinx Student Services & Outreach and the International Student Association Council.

“CCI Fest is a way for us, from early on, to help the entire student body get to know the different resources, services, programs and student organizations that exist for the huge diversity of identity groups among our students at Georgia State,” Sanseviro said.

Student Engagement will also showcase the expanding fraternity and sorority community on the Atlanta Campus with a Fraternity and Sorority Life Expo Aug. 25 in Student Center East. Sanseviro said two new organizations are joining the ranks of fraternities and sororities active at Georgia State, bringing the total to 30.

“We’ve really stepped it up this year to welcome students to Georgia State and set them up for a successful academic year,” Sanseviro said. “And our Panther Welcome website is a great resource that we’re always adding to as new events are planned. We encourage students to keep coming back to learn about new opportunities.”