Kevin Richardson of the “Exonerated Five,” Shares his Story
Use Scan QR Code to copy link and share it

Kevin Richardson, one part of the “Central Park Five,” now known as the “Exonerated Five,” shared his experience with the Georgia State University College of Law community after spending seven years behind bars for a crime that he didn’t commit.

“…In my path in becoming a journalist one of the most important things was to be in conversation with people who looked like me and to share their stories,” said Scott during the one-on-one conversation. 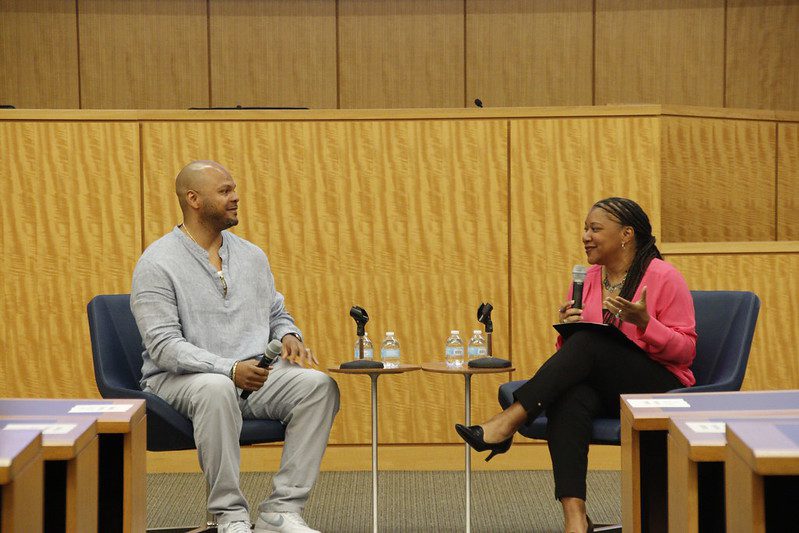 Kevin Richardson of the “Exonerated Five,” in conversation with WABE’s Rose Scott.

Richardson was just 14 years old when he and four other Black and Latino teenagers were wrongfully accused of raping and beating a white woman jogger in 1989 in New York City’s Central Park. He described how police detectives took advantage of his youth and violated his civil rights.

“…I felt threatened, physically, emotionally…being such a young guy and being taken advantage of. It was a lot that I was dealing with even at 14 years old,” Richardson explained. He recalled being confused and not knowing what was happening outside of the precinct.

“Then when we come out, we see paparazzi. People yelling at us, screaming at us, calling us all kinds of animals, calling us rapists and things of that nature, because our rights were violated, we were minors at this time…” Richardson said this was the first time that he experienced someone hating him because of the color of his skin.

Tanya Washington, professor of law at Georgia State Law and organizer of the event said. “The Exonerated Five’s extraordinary courage and faith tracked their growth from boys to men in the carceral state that is our criminal legal system. The imprisonment of these Black and brown boys for crimes they did not commit is an indictment of a system of laws that claim, but that often do not dispense justice.”

Richardson was convicted and sentenced to serve five to 10 years for a crime that he insisted he had no part in.  He was released from prison when he was 23-years-old, after spending a majority of his teenage years behind bars.

“The brotherhood is something I don’t take for granted,” he said.

Richardson reflected on the impact this situation has on his life and the work he’s doing years later to make a difference in the lives of others. He encourages people who are going through similar situations to keep pushing and to stay strong.

The “Exonerated Five,” story has reached people from all over the world including Filmmaker Ava DuVernay who connected with one of the group members through a direct message on social media. Eventually DuVernay

co-wrote and directed the 2019 Netflix television miniseries called “When They See Us,” which tells the story of the “Exonerated Five.”

Although Richardson’s life turned out different from what he envisioned, he has experienced a few significant wins. In 2020 Syracuse University awarded him with an honorary bachelor’s degree in fine arts, which is the first in Syracuse University’s 150-year history.

This event was a joint partnership between Georgia State University College of Law and Syracuse University’s Office of Multicultural Affairs.