ATLANTA — As a former student-athlete turned college administrator and education scholar, Anthony Davis brings a wealth of knowledge to his new role at Georgia State.

Since becoming associate vice president for Student Engagement and dean of students July 1, Davis has visited each of Georgia State’s campuses and begun meeting with faculty and staff in each community. And as the start of fall semester approaches, he’s ready to welcome Georgia State’s students to its campuses for the new academic year.

“At Georgia State we have a tremendous opportunity to pour into students and produce well-rounded people who will go on to become leaders in their respective communities and positive contributors to society as a whole,” Davis said. “I’m really passionate about working with people when they’re in transition, and that’s what really attracted me to higher education. I think about my experience as a college student, and how it helped me grow as a person, and I want to be able to pay it forward.”

The Office of the Dean of Students supports Georgia State students by connecting them to campus resources, facilitating the resolution of complaints and overseeing matters related to academic integrity and the student code of conduct. As dean of students, Davis will also oversee the Perimeter College student experience and the new area of Cultures, Communities and Inclusion. They are all subjects he’s familiar with as a professional and an academic. 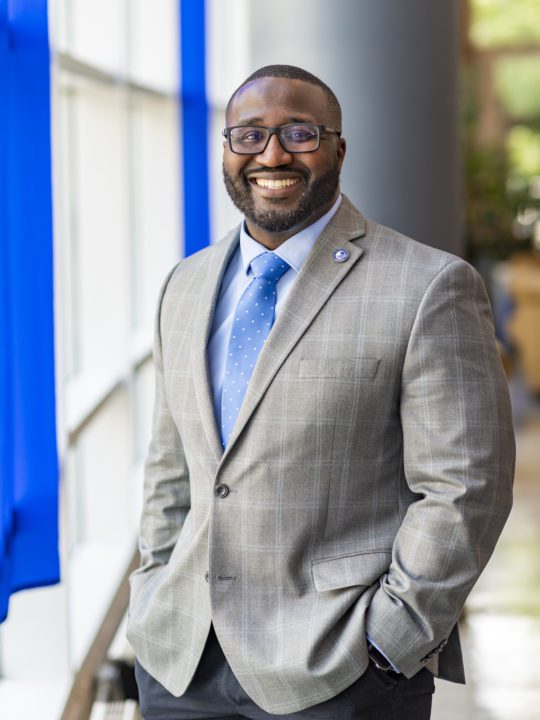 A former college football player, Davis earned a bachelor’s degree in elementary education with a focus in African American studies from the University of Wisconsin-Madison. From there he joined the Indianapolis Colts before playing several seasons in the Canadian Football League.

Returning to academia, Davis began pursuing advanced degrees and went to work for his alma mater.

At the University of Wisconsin-Madison, he also worked as a diversity intern coordinator and teaching assistant. He later served as director of intercultural programs at Loras College, a private Catholic institution in Dubuque, Iowa.

As student life specialist at Anne Arundel Community College in Maryland, Davis worked with campus activities board members to bolster their leadership skills and better engage the student body.

His most recent position was as interim dean of students at Winthrop University in Rock Hill, S.C.

Vice President for Student Engagement Michael Sanseviro said Davis’ varied experiences at the community college level and at large universities give him a unique understanding of the student experience at Georgia State.

“Anthony brings a fascinating background,” Sanseviro said. “Having been at a large, public university as a student-athlete as an undergrad, he brings some insights that we didn’t have within our leadership team. And he’s had a good mix of experiences at public and private schools, large schools and smaller campuses, so he brings diverse perspectives and experiences that I think will resonate well with our student body across all of our campuses.”