Cynthia Padilla Pearson (B.S. ’08) Makes Her Mark as a Victim Advocate
Use Scan QR Code to copy link and share it

ATLANTA – Cynthia Padilla Pearson (B.S. in Criminal Justice ’08), MSCM, CCI, is a victims’ rights advocate with a long-held belief that it’s her duty to give back to her community. A member of the Georgia State Alumni Association’s 40 Under 40 class of 2022, she focuses her service on the idea of stewardship.

Pearson’s interest in criminal justice began as a high school senior. She was an avid viewer of “Law & Order.”

“I was not sure of my initial career plans,” she said. “I enjoyed the courtroom dynamic and the idea of advocating for people who had been wronged or harmed. I wanted to be in the legal system in some way.” 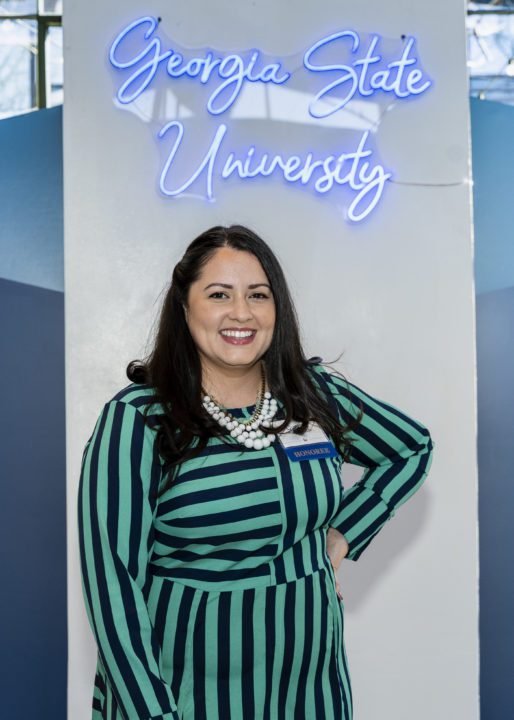 After a few campus visits, Georgia State piqued Pearson’s interest due to its high level of diversity among students and its focus on experiential learning. She believed the university would expose her to student involvement beyond a classroom.

As a first-year student, Pearson immersed herself in the community as a member of numerous student associations. She was one of three founders of the Delta Beta chapter of Lambda Theta Alpha Latin Sorority Inc. In 2008, she was named homecoming queen. She also received the Nell Hamilton Trotter Student Leadership Award for her graduating class.

During her senior year, her first internship was at the Office of the Solicitor General of the State Court of Fulton County. The internship introduced her to victim advocacy.

“I wanted to help people who were hurt, and our internship coordinator asked if I’d ever heard of victim advocacy,” Pearson said.

Pearson obtained her first job as a victim advocate at the Fulton County District Attorney’s Office just two months after graduating, a rare occurrence in a competitive field.

“I learned that victim advocacy requires you to be passionate about others,” she said. “There’s sometimes very little attention given to a person who was directly impacted by another person’s behaviors or decisions.”

Now the program manager at the Atlanta Volunteer Lawyers Foundation (AVLF), a nonprofit that is the largest provider of pro bono legal services in Atlanta, she’s supporting people who are otherwise unable to obtain quality legal resources. Pearson began her journey at AVLF as a legal navigator where she realized how crisis brings life-altering changes to the human experience. As program manager, she works with many interns from colleges around Georgia.

“The people who came before me left the door open for me to have a great experience, to get to the next step in my journey,” she said. “Now, as a seasoned professional, I get to look out for the next person coming through.”

Outside of work, Pearson continues to be a positive force in her community. Her parents instilled in her the idea of stewardship by contributing time, talent or resources to the vision or mission of the organizations she serves. For example, she remains an active member of her sorority and mentors high school minorities through Generación Latina. She was recently nominated as one of the 50 Most Influential Latinos in Georgia.

“I ask myself, ‘what can we do in this community?’,” Pearson said. “I strive to make a difference, to make things better for the next person.”

After a career of more than 13 years that’s given her experience in the legal system, Pearson continues to look for ways to serve. She is considering plans to study law, preferably at Georgia State University’s College of Law, while expanding her trauma and conflict management consulting services.

“I will continue to be a resource and advocate for victims in the legal system, in some way,” she said.