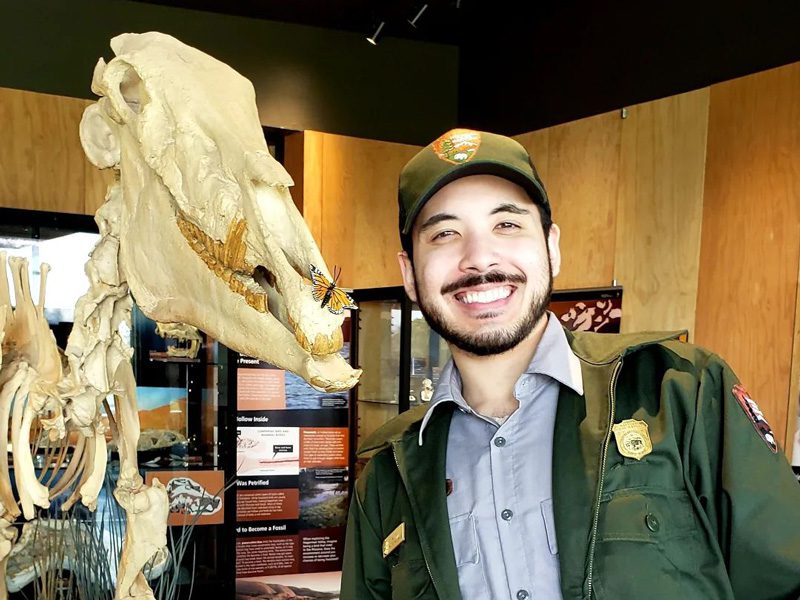 Alexander Kim believes he has one of the coolest jobs in the world. One day he could be staging an exhibit to help people learn about Japanese-American culture, and the next day he could be facetoface with the skeletal remains of a prehistoric animal.

Kim oversees about 70,000 natural history specimens and 3,000 cultural artifacts, including artifacts from archaeological finds and western Oregon Trail settlements. The Hagerman Fossil Beds National Monument is home to 140 species of plants and animals. The site is also known for containing the world’s largest assemblage of Equus simplicidens, a prehistoric, zebra-like animal also known as the “Hagerman Horse.”

“My utmost favorite part of the job is the sense of fulfillment I get knowing I’m protecting our country’s natural and cultural resources,” Kim said. “We have a lot of cool things here and I think it’s important that we be able to tell these stories.”

After graduating from Georgia State, Kim landed an internship through the Scientist-in-Parks program. Run by the National Park Service, the program helps aspiring professionals work on natural resource management projects.

For his internship, Kim moved to Idaho where he worked with the Hagerman Fossil Beds National Monument, moving nearly 26,000 fossil specimens from outdoor storage to a paleontology lab. He also identified and sorted hundreds of backlogged specimens. The National Park Service offered Kim a full-time job soon after he completed the internship.

“I get a lot of joy out of sharing these artifacts and what I know about them with the public through interpretation and outreach,” Kim said.

“To understand the future, you need to understand the past,” Kim said. “America is a relatively young country, and it has a very diverse and interesting history. In the case of Minidoka, I think it’s good that we have artifacts to help us remember not to repeat past errors.”