The woman weeping before him in court had lost her six-year-old child to a sudden bout of pneumonia days before. Now the child’s father, an estranged abuser who met the child only once, was using the child’s death as a chance to target the mother and continue his cruelty.

“He was doing whatever he could to antagonize this woman,” Araya said. “He said he wanted her to cut the child’s body in half and mail half to him. She was as destroyed and distraught as somebody could be.”

Araya could not imagine the grief and desperation the mother felt.

Back then, Araya was an undergraduate at Columbus State University. He faced this crisis at his job on the Muscogee County Probate Court in his hometown of Columbus, Georgia. Araya was a court employee, not the woman’s attorney. There was only so much help he could do.

The person who could help was Probate Court Judge Marc D’Antonio, a role model for Araya’s legal career. “Judge D’Antonio handled this case with utmost urgency while ensuring that all parties received proper due process and service,” Araya recalled.

For Araya, the experience left a mark. “That was the moment that made me say, this is what I want to do.”

While pursuing his undergraduate degree, Araya worked at personal injury law firms. “I really did enjoy that,” he said, “because every time somebody comes to you, that person is in a time of need, and you are in a position where you can help them recover from the damages they have suffered. A common expression in law is that the goal is to make these people whole again.”

Araya’s parents grew up in Addis Ababa, Ethiopia and met in the United States. As he progresses in the legal field, Araya often finds himself as the only African American man in the room. He believes representation is important in law schools and legal practice.

“Law has historically lacked diversity, and it oftentimes can be quite apparent even in modern times. I have worked at firms where I have been the only person of color, as well as firms where the majority of the staff and attorneys are people of color, and I have definitely noted a distinct difference in the demographics in clients,” said Araya.

His experiences have built a resolve to break barriers for future law students. 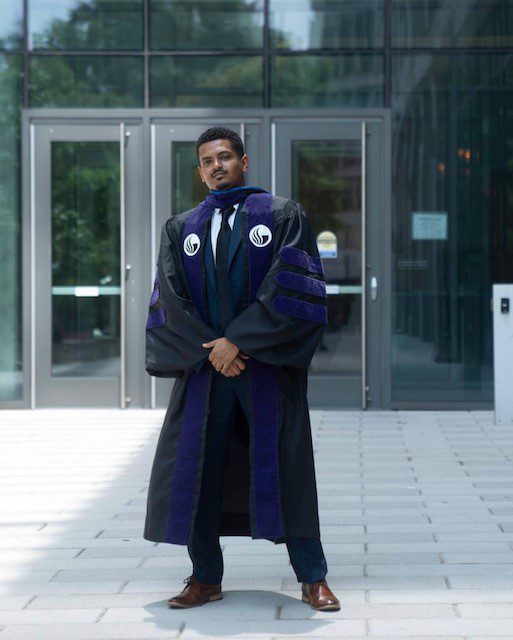 In February 2022, Araya was awarded the opportunity to put together a project for Georgia State Law’s first Racial Justice Innovations Initiative. With help from his roommate and friend, Alexander Garrett, Araya used the award funds to host an event at Georgia State University College of Law for Black high school and undergraduate students considering a career in law.

“We had four African American attorneys come out and answer questions. The students were able to hear our experiences as Black people, where we came from, how we got into law, and what keeps us going. A number of the students who attended the event still email me for advice and mentorship.”

Both the Racial Justice Innovations Initiative Award and Araya’s experience at the Probate Court strengthened his drive to bring more diverse voices into the legal profession. This creates more chances for vulnerable people to find help from those who, like Araya, can put themselves in their clients’ shoes.

Araya looks ahead to a future litigating constitutional cases to uphold his clients’ civil rights and protect their interests. Now he turns his eyes to the wider world with the hope of building a nation where the law works for everyone.