Students Get a Real-Life Lesson in Wrongful Conviction Case

Lucio is a Texas woman and mother of 14, who was scheduled for execution on April 27, 2022, for the death of her two-year-old daughter, Mariah.

Lucio, 53, is the only Hispanic woman currently on death row in Texas. Many people believe that Lucio is innocent and was wrongfully convicted of murdering her daughter in 2007. Iasiello found out about the case a few years ago and decided to approach Professor Covey about studying Lucio’s case in their wrongful convictions class.

“…The record is pretty extensive, but we divided up the materials and read pretty much everything we could about the trial proceedings and the clemency application. Once my class understood what was going on in the case, that the evidence used to convict Melissa was not reliable, and that the tactics used by the detectives in the case precisely match the types of interrogation tactics that have been proven to lead to wrongful convictions, you could tell that their sense of indignation was triggered,” said Covey.

Lucio’s daughter suffered from injuries that ultimately resulted in her death two days later. Prosecutors believe that the injuries were caused by Lucio and that she was abusing the child. However, her clemency petition states that the injuries came from an accidental fall down the stairs. Lucio’s life has been full of turmoil starting at a young age. She is a survivor of sexual abuse and domestic violence. The abuse began at age six and she became a child bride at age 16.

“Melissa’s case wasn’t a story in a textbook, there is a human life hanging in the balance. Objectively, there wasn’t a ton we could do, but for me doing nothing wasn’t an option,” explained Iasiello who approached their peers about writing a letter to Texas Governor Greg Abbott. 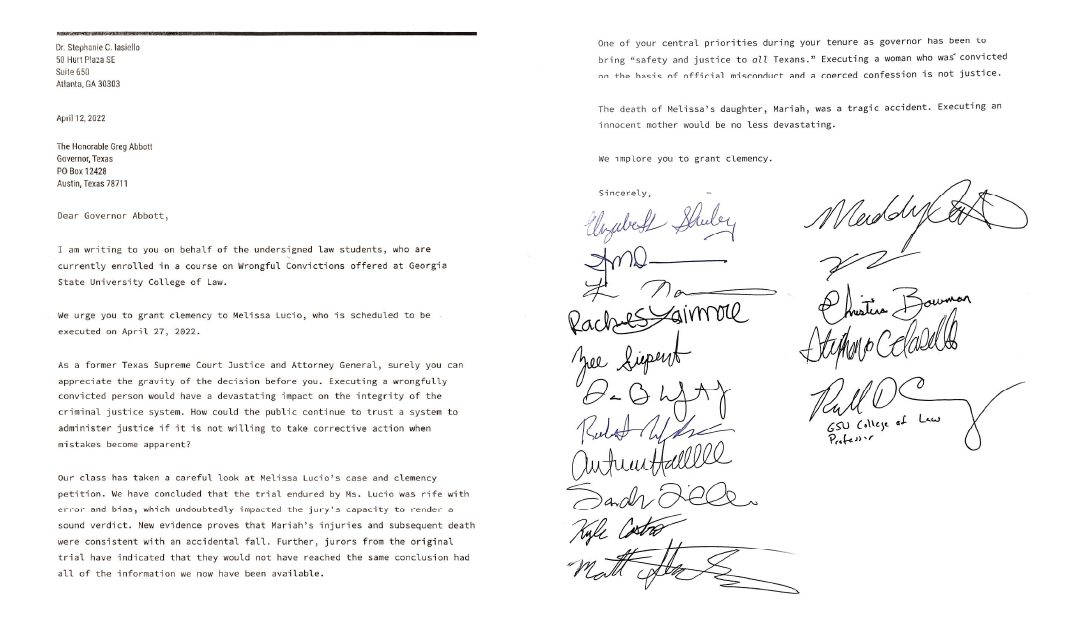 “…That seemed to be the best way to make our voices heard. I was the one who brought the case to Professor Covey, so I felt responsible. I don’t know if it will make a difference in the ultimate outcome, but it is important to me that my actions align with my values and for my own integrity, I could not remain silent,” said Iasiello who is a part of the Georgia State University Prison Education Project.

Iasiello’s ultimate goal is to start a “juris doctor in prison program,” so that incarcerated individuals have access to the tools and knowledge that they need to navigate the legal system.

This goal doesn’t surprise Professor Covey because he believes that the second and third-year law students in his class “are almost without exception, devoted to pursuing careers in the public interest, and most specifically they are focused on working in the criminal justice system.”

“It was energizing to be in a space where my peers cared deeply about creating a more just and equitable legal system. It gave me some hope for the future of the profession,” Iasiello shared.

Covey said Iasiello drafted the letter the class signed and did a wonderful job.

“[They are] clearly ready to be an impactful lawyer from day one,” he added referring to Iasiello.

“For criminal lawyers, there is little that is more important than identifying the ways in which the system can go catastrophically wrong and wind up convicting, and sometimes sentencing to death, innocent people,” said Covey.

Update: On April 25, 2022, two days before Melissa Lucio was scheduled to be executed, the Texas Court of Criminal Appeals decided to stop Lucio’s execution and send her case back to trial for review. The Court ordered the 138th Judicial District Court of Cameron County, Texas to consider new evidence in her case.