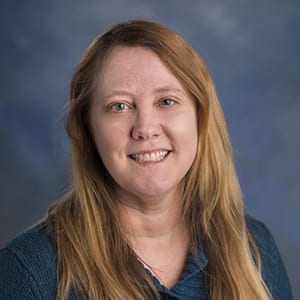 For nearly two decades, Cassandra White has been affectionately known as the “fairy gradmother” by students and peers in Georgia State University’s Department of Anthropology.

White, an Associate Professor in the Department of Anthropology, has been recognized for her mentorship of students and service to the department with the 2022 George M. Sparks Award. The award, named after former Georgia State president George McIntosh Sparks, is given to an individual who exemplifies a willingness to go the extra mile with good humor and perseverance.

White, who served as Director of Undergraduate Studies in the department from 2011 to 2021, said she’s honored to receive the Sparks award.

“It’s very moving,” White said. “I appreciate that our department recognizes and cares about service and mentorship and its value to our students.”

Over the years, White has taught the Senior Seminar capstone course for the anthropology major, organized career fairs, and directed multiple study abroad programs in Rio De Janeiro, Brazil. She has also supervised internships and mentored more than a dozen master’s students in the department.

“One of the most gratifying parts of being a professor is seeing the students fulfill their life path,” White said. “I keep in touch with hundreds of our alumni. Some students go on to lead their own study abroad programs or work at the Centers for Disease Control and Prevention. It’s cool to see what they’re doing.”

Faidra Papavasiliou, a Senior Lecturer in the Anthropology department, nominated White for the award.

“In a department full of very supportive and mindful faculty, Dr. White is particularly well known for offering endless hours of moral support and listening ears for students who are struggling, whether academically or personally,” Papavasiliou said. “Her colleagues know her as someone who is willing to take on extra work, even when she already has too much on her plate.”