“Food Justice” is a one-night engagement that showcases original monologues performed by student actors from the creative perspective of various fruits and vegetables. The show features a dozen monologues beginning with Grape, who speaks about how grapes are grown and the fact that there is an unbelievable number of areas without access to her. The show ends with Kale who complains about the shockingly high number of communities in the US that are part of a food desert. Additionally, the program includes poetry, songs, rap, and music composed by the students.

Susan G. Reid, Professor of Practice in Acting and Directing conceived of “Food Justice” after being inspired from an interview with Latisha Springer, founder of Free99 Fridge. Reid collaborated with Susan Sojourna Collier, Assistant Professor in the Film, Television and Radio Department at Syracuse University to assist in the writing curation, who also enlisted students and graduates from Georgia State, Syracuse and Clark Atlanta University to write the monologues.

“The goal of ‘Food Justice’ is to open the eyes of the audience to the pandemic that is food insecurity,” said Professor Reid. “This piece is theatrical activism, but also presented using a variety of mediums, including film and motion graphics.”

The performance will be adapted into an animated trailer led by Jason Drakeford, Professor of Practice and Immersive Media Producer at the Creative Media Industries Institute (CMII) and students from his Motion Graphics class.

“Food Justice” is part of the School of Film, Media & Theatre’s “Give Back” series, an initiative that seeks to shed light on relevant social issues that impact the Georgia State community, Atlanta and the global landscape.

After the performance, there will be a talkback with GSU Panther Pantry, Free99Fridge and Food4Life to discuss food justice and how we can all make a difference.

“Food Justice” is free and open to the public. 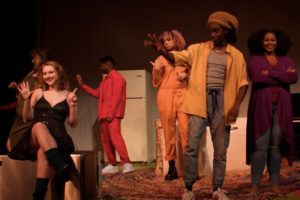