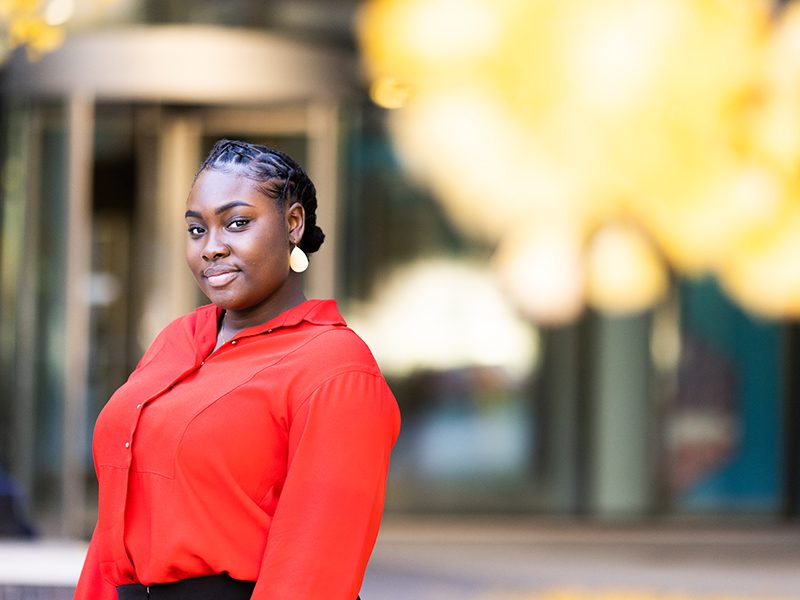 Maïmouna Sacko, a first-generation college student and daughter of immigrants, has often had to work multiple jobs to support herself while studying for her bachelor’s degree in biology.

Sacko said this final semester on the way to graduation has also been one of her most challenging.

“Because of the pandemic, I lost my job,” said Sacko. “I had to bounce back from everything I lost and pick up a second job.”

Now, she works as a pharmacy technician at CVS and an event coordinator at the Atlanta Botanical Garden.

Sacko will pursue a master’s degree at Georgia State’s School of Public Health, starting in January, and plans to attend medical school after that. She traces her interest in medicine back to childhood when she helped take care of her younger siblings, family members and even strangers when they were sick. Sacko’s mom used to work as a caretaker in a hospice, and Sacko would often tag along with her mother and get to know her mom’s patients on a personal level.

“I would go and develop a relationship with each one of her patients,” Sacko said. “As a child, I was always asking her patients questions and developing a bond with them.”

Sacko was born three weeks after her parents immigrated to the U.S. from Mali. Though she hasn’t been back to Mali in 15 years, she aspires to play a role in improving the healthcare system in the West African nation and creating opportunities for young adults interested in STEM programs. She plans to team up with her sister, Fatoumata, 26, who is also a Georgia State graduate, to start a business in Mali to make STEM programs more available there.

“I hope people can see what it’s like to take a different route,” Sacko said. “I want people to see the struggles as well as the success. There’s still a lot of resources they lack, and I want to reintroduce STEM to the little girls and boys growing up there. I want them to see me as an inspiration.”

Sacko has purchased a round-trip ticket to Mali as a graduation gift to herself. She plans to spend two weeks there to reconnect with family and let everyone know anything is possible.

She wants them to know that the African upbringing that her parents provided helped propel her to study hard and graduate, though they often couldn’t help with her college expenses. Sacko’s father, who works as a heating and air conditioning (HVAC) technician, was underpaid when he first moved to America, she said.

Now, her father works at one of the top HVAC companies in Georgia. Sacko said she was inspired by her father’s work ethic and drive.

Sacko said she realized this year that in order to move forward, it’s important to remember where you come from.

“It’s the African way,” Sacko said. “It’s where we come from. We sometimes have to work 10 times harder. My father wanted his children to have a better life than him. My parents instilled in me that school was first.”