In the Classroom: Students Learn about Globalization and the Economy
Use Scan QR Code to copy link and share it 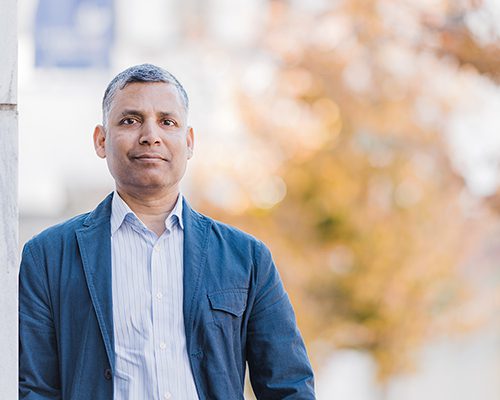 In this occasional series, we ask Arts & Sciences instructors to discuss how they engage students in the great questions of our time.

Q. How would you describe this course?

A. This is a comparative global economic history course with a particular focus on China and India, the two fastest-growing economies in the world today.

It focuses on the strengths, weaknesses, and changes in the global economy and the economies of India and China since the 16th century. Before 1800, India and China were at the forefront of the worldwide economy. However, since the 19th century, Europe and the West have held the dominant position.

Now, China and India are on the rise and reclaiming their lost position. This trajectory is fascinating, and that is what this course examines. This course also covers various important topics, such as a comparative analysis of markets, commodities, the role of states, and economic institutions in India, China, and Europe/the West.

Q. What makes this course appealing to students

A. In the American school and college education systems, there is a general focus on teaching European and North American history. Students find this course interesting because it focuses on Asia’s role in the world economy and explores the economic change in China and India during the last 500 years. Students get to study and understand the dynamics of these two major economies and their implications for the world economy.

Q. Why is this course important?

A. China is competing with the United States for the position of the largest economy in the world. That is one reason why students should learn more about China. India, similarly, has seen rapid economic growth in Gross Domestic Product (GDP) in the last three decades.

China and India are the two most densely populated economies in the world. Rapid economic growth in these countries has a significant impact on the world economy, which is in transition from a Europe/West-centered to an Asia-centered world economy.

The other reason is that it is vital to understand China and India’s long-term economic growth dynamics. In the 17th and 18th centuries, China and India together had about 50% share of world GDP. Their share went down to less than 10 % in 1950. It is projected that the two together will generate more than one-third of global GDP by 2030.

I think it’s essential for students to learn about these developments to understand the history of the world economy.

Q. How can students take this course into the workforce?

A. The first essential skill that students learn is critical thinking and the idea that people can have different perspectives on historical processes. Students who take this course learn the relative strengths and weaknesses of a historical perspective and are equipped with skills to counter one that is one-sided and parochial. These then enable them to develop problem-solving skills in the workplace.

The second critical skill that students acquire is reading and interpreting data on GDP, income, and population. They learn how to process large sets of data and identify growth trends as well as draw conclusions.

They also learn about business practices, institutions, values, and cultures in Asia. Given the globalized nature of our economy today, these skills are vital and useful at many workplaces.