Six Byrdine F. Lewis College of Nursing and Health Professions doctor of physical therapy (D.P.T.) students hope to encourage and mentor the next generation of physical therapists before finishing their degrees. Motivated to increase the diversity of young PT professionals, these students are sharing the knowledge they learned the hard way.

“When I applied, I underestimated the process and the time it takes to apply to PT school,” said Brown. “Not a lot of minority students know this process.”

She broke down the process into GRE preparation and testing steps, helped applicants get their required pre-application volunteer hours, and helped them think of a new plan if not accepted into the PT program.

“I want to help them think about how to come back [from a possible rejection], to know what you want to do in the meantime if rejected,” said Brown.

“The goal of this initiative is to guide the undergraduates to plan for the [PT school] application early enough to get in volunteer hours and GRE preparation,” said Brown. Her long-term plan is to bring the new APTA initiative to others’ attention and form a group to continue the mentoring after she graduates.

Miriah Smith, a third-year DPT student, targeted a younger audience to pursue the PT field. As part of her required program, she and four classmates, DeVaughn Davis, Christina Chavez, Elihu Igbinadolor and Tyra Holliday, came up with the idea of going into the community to educate the public about PT. Though the group initially planned to target students at historically Black colleges and universities, they switched to high schools after a successful service project in August, hoping to make a greater impact on minority students. Only 3 percent of practicing physical therapists are Black, but 12.4 percent of the total U.S. population is Black.

“We wanted to reach the thousands of kids in Atlanta, but we are just trying to open the door so that a few of these students can take a deep look at the profession,” said Smith.

Davis, an alumnus of Booker T. Washington High School in the Atlanta Public School System, contacted his alma mater and another Atlanta Public school for the service project. Both high schools were so impressed that they asked for the PT students to speak to their classes.

The DPT students tailored their presentation and messages for each age group, giving an overall view of PT, explaining the differences in PT and occupational therapy (OT) and the differences among the variety of rehabilitation aid positions (PT aides, OT aides, etc.). 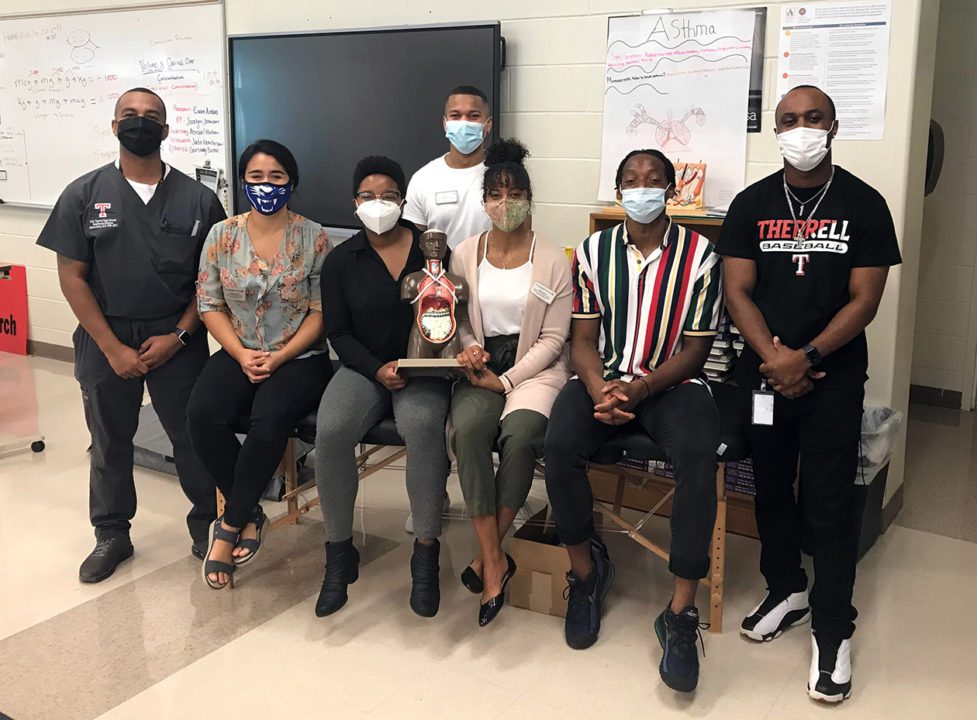 “We kept in mind that we hadn’t heard of physical therapy until we got to college,” Smith said. “We knew we had to wow them [the high school students], so we gave them a case study to practice using a football player who went up for a catch and came down hard on his head and knee.”

The group ran the high schoolers through scenarios of tests and measures, teaching them how to test strength, check for cranial nerve damage and balance.

“They thought it was cool to test each other’s strength,” said Smith.

As a bonus, Smith said the PT program’s diversity group is interested in future visits and carrying on the agenda after she graduates.

“Make things connect if you have more than one passion,” he said, referring to his interest in medical science and animals and others’ interests in pediatrics.