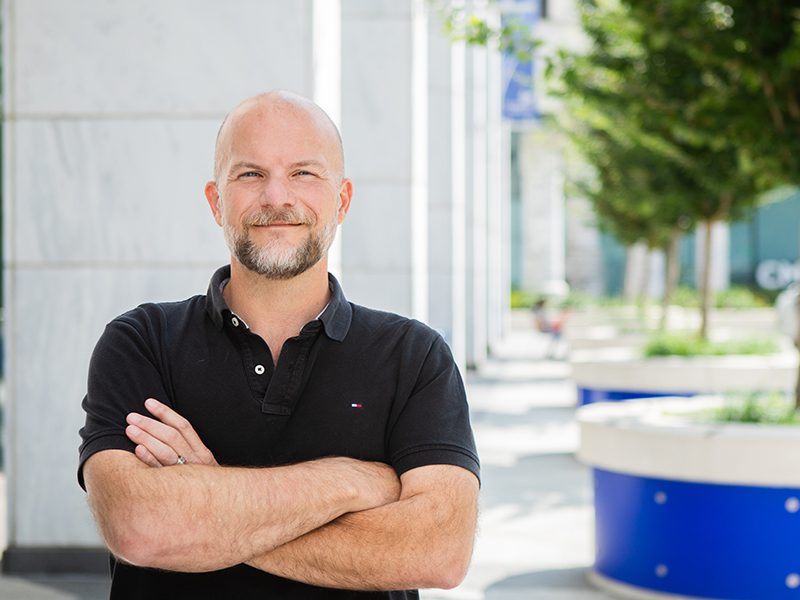 Martin Padgett loves a good story. And in the 1970s, Atlanta was a hotbed for some of the best stories around.

Padgett, a Ph.D. student in History at Georgia State, has published a new book, ‘A Night at the Sweet Gum Head,’ to chronicle the role Atlanta played as the mecca for the gay rights movement in the South during the 1970s.

Padgett recently shared his thoughts about the process of writing his book and the impact of the nightclub known as the Sweet Gum Head.

How did you discover the Sweet Gum Head in your research and what made you include it in the title of your book?

I read a couple of other books that took place in bars during moments of historical change. They were really appealing to me. I just like the idea of setting something in a bar and then I started writing about Cheshire Bridge Road and never heard the name of the nightclub. The more I researched and reread sources, the more I saw that name—Sweet Gum Head. I started searching on Google and would see all of these pictures of celebrities, drag queens and political protest that happened there. The story was fantastic, but no one had told it yet.

Why did you choose to spotlight activist Bill Smith and drag artist John Greenwell (also known as Rachel Wells) in your book?

John Greenwell’s memoir had been published online, so that gave me a great start. I spoke with him first, but I always felt like there was another piece of the story. I was familiar with the Cheshire Bridge nightlife scene in Atlanta, but also during this time the gay civil rights movement was starting to take shape. I wanted to merge those stories together and show how much of a struggle it was to get gay rights off the ground. There’s also a picture of Bill Smith in the Georgia State archives and it’s from 1972 Pride, the second Pride protest Atlanta had ever had. Bill Smith had just graduated from Georgia State and there he is leading a protest down Peachtree Street. It’s an iconic image.

How important was Atlanta as an outlet for queer life?

Atlanta was an oasis in the middle of the South. The cities that were closest to us were not very welcoming to queer life at all. And not just the smaller cities. A lot of major cities had a notorious reputation for not being accepting of queer life. There was nothing like Atlanta. If you were from a small town like Americus or Columbia, South Carolina, you made your way here. There was a way to be out and comfortable as an independent queer person. It’s the same today as it was in the 1970s because people like the main characters in my book decided Atlanta was the place to be. All the people and activists I spoke with said Atlanta was different from the South. If a gay civil rights movement were to happen in the South, it had to happen here.

What did you learn about the Cheshire Bridge Road area in the 1960s and 1970s and what was its impact on Atlanta culture during that time?

During its time, it was one of the hubs of queer nightlife. As the decade progressed and more nightclubs opened, along with more gay-friendly businesses, it became its own little neighborhood. It would eventually be supplanted by Midtown, but Cheshire Bridge has a long history. To me, the most interesting stories lie somewhere between Buckhead and Emory.

Was there anything you discovered during your research for the book that really stood out to you?

One thing that resonated with me was that Atlanta’s queer culture had the ability to attract the straight world, straight allies and straight celebrities who particularly enjoyed the drag shows. It’s a valuable tool the gay community used to build this network of allies, and they were going to need it. The community really relied on all the people they brought to their side.

What’s it like to identify and tell a story from history that few people knew of before?

What I do is a blend of history and journalism, so a part of that is that journalistic satisfaction of finding something that no one else has noticed. In history and journalism, you’re looking for an explanation. You’re looking for explanations of why we did the things we did. When you can find those links and some kind of rationale and these deep sources no one else has explored yet, it’s the geek version of hitting the three-pointer at the end of the game.

What influenced you to take an interest in history?

Working in journalism for 30 years, I always felt like the feature stories and the longer investigative pieces are the stories I really enjoyed. When I decided to go back to school five or six years ago, I thought, “I need to do something to hone these skills.” At Georgia State University, what I’m learning from my history professors is rigorous analysis and evaluation of sources and what they mean in context.

What is it like to have such a positive response to your book?

I’m so thrilled that what I’ve done has rung true to the people who were actually there. I hope someone who was half my age in the 1990s is working on something that we’ve never discussed before. That’s the goal. We want accuracy and correct analysis, but we also want to transport someone in time.