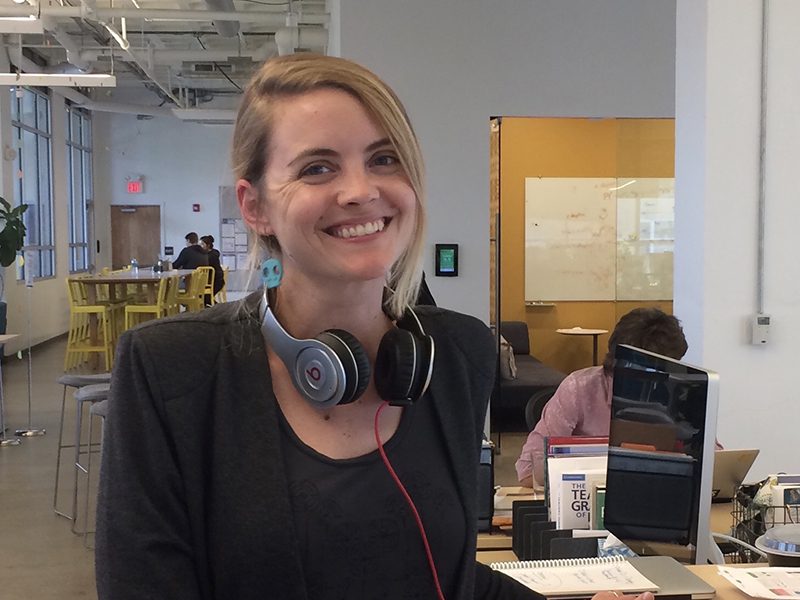 For Cindy Berger, a decision to apply for an internship led to a dream job helping people learn foreign languages.

In the summer of 2017, while working on her PhD in Applied Linguistics at Georgia State, Berger applied for an intern position at Duolingo, the company that offers a popular language learning app under the same name. Her PhD advisor, Scott Crossley, encouraged her to pursue the opportunity, which required multiple rounds of interviews before she was accepted.

Berger has now been at Duolingo for more than four years and has worked on numerous projects including the company’s Spanish Podcast, Duolingo’s Tips and Audio Lessons features and the Duolingo English Test.

“From day one, Duolingo treated me like a full-time employee,” Berger said. “I was given a great deal of independence, and they took my ideas seriously.”

At the end of the three-month internship, Duolingo offered Berger a full-time position. She was not finished with her dissertation, so she worked full time at the company while completing her PhD.

“It wasn’t easy, but I received a lot of support from both institutions to make it possible,” Berger said.

Berger currently co-leads a team that develops content for Duolingo’s Stories Feature and manages a group of educational content developers working on long-form content across the app.

Since the pandemic, Berger said she’s seen a spike in Duolingo’s usage which aligned with a larger trend of people using self-study apps. In the months following the nationwide lockdown due to the pandemic, 30 million new learners joined Duolingo, according to the company. The figures for March and April of 2020 reflected an increase of 67 percent compared to the previous year.

“My day-to-day work is collaborative and dynamic,” Berger said. “On any given day I sync with colleagues about ongoing projects, set and track progress towards quarterly goals, brainstorm new directions, and more.”

Teaching language to those in need has always been a passion for Berger.

Before attending Georgia State for her master’s and doctoral degrees, Berger taught English language courses at Nashville State Community College and worked at the Tennessee Language Center. Berger said Nashville has a large immigrant and refugee population, many of whom needed help learning English at a proficient level.

“A lot of my students were professionals who’d been previously educated in other countries but suddenly found themselves in need of more polished, high-level English language skills,” Berger said. “Simultaneously, I was teaching community education language courses to recently arrived refugees, many of whom had experienced interrupted education due to circumstances outside their control.”

Berger said she’s proud of her accomplishments and wants to continue to make access to learning languages readily available.

“Working with adult English as a second language (ESL) learners in the USA also highlighted for me the degree to which language ability, or lack thereof, can create and reinforce power differentials,” Berger said. “This is one reason why Duolingo’s mission to develop the best education in the world and make it universally available continues to be so appealing to me.”