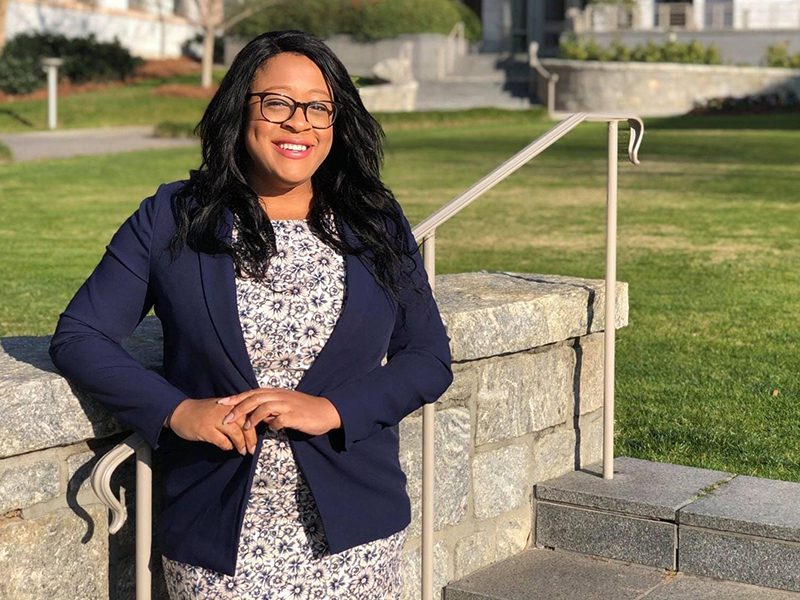 During her sophomore year at Georgia State University, Onika Anglin was introduced to the world of public health during a microbiology and public health class.

The class was taught by an epidemiologist at the Centers for Disease Control and Prevention (CDC), and Anglin was inspired.

“That was when I first found out what an epidemiologist was and their role in disease prevention.” Anglin said. “It definitely piqued my interest.”

Anglin, who graduated with bachelor’s degrees in philosophy and anthropology in 2012, said her experience at Georgia State set her on a path to pursue a career in public health, eventually landing a position as a surveillance epidemiologist with the CDC.

In December, Anglin was hired to help with the COVID-19 response as part of the CDC’s Coronavirus Disease 2019 Associated Hospitalization Surveillance Network (COVID-NET).

Anglin receives data and reports from health officials across 14 states, representing roughly 10 percent of the U.S. population. The data collected from more than 250 acute-care hospitals are then compiled, analyzed and published in the CDC’s weekly COVID-NET site.

Anglin works with a team of epidemiologists responsible for collecting and analyzing hospitalization rates and patient characteristics and disseminating data to the public. The CDC uses COVID-NET as an important source of data for hospitalization trends.

“The pandemic is so dynamic and things fluctuate,” Anglin said. “There’s so much data information that we have to work with. We try to get this information out to the public in a meaningful way that people are able to digest.”

Anglin said her degrees in anthropology and philosophy have helped her throughout her career.

“I found having a degree in anthropology has always been an asset to me working in public health,” Anglin said, “particularly considering I have spent a significant portion of my time in public health working with vulnerable populations.”

After graduating from Georgia State, Anglin earned a master’s degree in public health at the University of Pennsylvania School of Medicine. She then worked at the Philadelphia Department of Public Health as a clinical research coordinator and later as a surveillance manager.

During her time there, Anglin helped provide education to high school-aged students to get screened for gonorrhea and chlamydia, testing about 10,000 young people per year.

Later, she worked with the city’s underserved communities during the opioid crisis, helping to oversee programs designed to prevent needle sharing.

“Philadelphia has pockets where there’s poverty and lack of access to health care,” she said. “We did a lot of community outreach work in terms of engaging with communities with inequitable access to healthcare and other barriers to improving community health impeded by the built environment at community events such as block parties, LGBTQ+ events and prevention programs.”

Anglin said she feels like she’s making a difference working in public health.

“I’m passionate about working to improve health disparities that we see in this country, especially in minority populations and in women’s health,” Anglin said. “Working in public health is a way I feel I can make an impact. It’s very meaningful to me.”