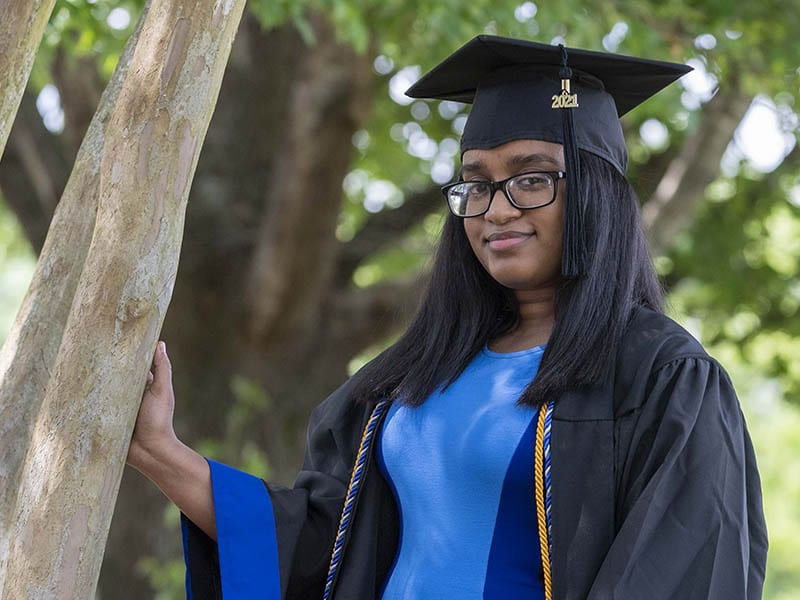 Use Scan QR Code to copy link and share it
A Chance Meeting During Tigsty Abraha’s High School Lunch Period Changed the Course of Her Life.
By Rebecca Rakoczy

DECATUR, Ga.—Three years ago, Tigsty Abraha was a bit unsure if college was for her.

Her mother, who was a single parent, had died when Abraha was 16. Still a high school student, Abraha was living with her three sisters, finishing her studies and holding down her full-time job at a fast-food restaurant.

Today, Abraha is a State Farm Scholar at Georgia State University’s Perimeter College. She’s on the President’s List and Dean’s List for academic achievement and was recently named the college’s Outstanding Honors College Student. Her  goal is to become a medical doctor.

Abraha will graduate with honors May 11 during Perimeter’s commencement at Center Parc Stadium. She will continue at Georgia State in its dual undergraduate/graduate degree programs with the goal of completing a bachelor’s degree in biology and a master’s degree in medical science. She is one of about 2,000 degree candidates slated to graduate from Perimeter College in spring and summer after following pathways ranging from health science professions to engineering and business administration.

“It was my senior year of high school, and I was not really interested in going to college,” she said. “I was not aware of financial scholarships and saw college as not affordable.”

“I was working at McDonald’s, sometimes doing multiple different shifts,” she said. “I thought this was my career.”

An older sister who was already a Georgia State student encouraged her to apply to Perimeter College “just to see if I would like it,” Abraha said.

“I sent in my SAT scores in January,” she said. “In February, I quit my job to get my high school grades up.”

“I walked up to him thinking he was a GSU Perimeter College admissions representative,” Abraha said. “I wanted to ask him why my SAT scores weren’t received, but he asked me if I was there to apply for the State Farm Scholars. I guess from there, the rest is history.”

Rewriting Her Future Through Higher Education

Abraha was accepted as a State Farm Scholar and enrolled in the Perimeter Academy program, which gives students a head start in their studies for college.

“I really liked how we started in summer,” she said. “It helped with transitioning from high school. It really felt like a fresh start, and I was able to get the support I initially needed.”

As a “graduate” of Perimeter Academy, Abraha mentored incoming freshman in the program. She also became involved in the college’s Math, Engineering and Science Achievement program (MESA) and was a supplemental instructor in chemistry, where she enjoyed assisting other students.

Abraha is in the third cohort of the Georgia State LIFT/State Farm program, which  began in 2017.

“Leadership, determination and compassion are a few words that come to mind when I think of Tigsty,” Potier said. “She has been one of the most academically accomplished students in our program’s history.”

Along with easing the worry of paying for college, becoming a State Farm Scholar helped galvanize Abraha’s desire to become a doctor because it exposed her to different careers, she said.

“In LSAMP, I was in a community of only STEM students — minorities working to try to get their degree,” she said. “And we had all these resources to get there.”

During an LSAMP conference in Athens, Abraha gained the confidence to pursue a biology degree.

“These students were enrolled in challenging majors, and it made me feel like I belonged,” she said. “I left the conference feeling like I could accomplish anything I wanted to.”

“I look forward to getting my master’s and getting in to medical school,” she said.

As a doctor, she hopes to work in underserved communities.

“I know the pre-med route is a long one, but I don’t mind how long it will take,” she said. “The main thing is to being able to help other people during my journey. I don’t have to be a doctor to start helping people now.”